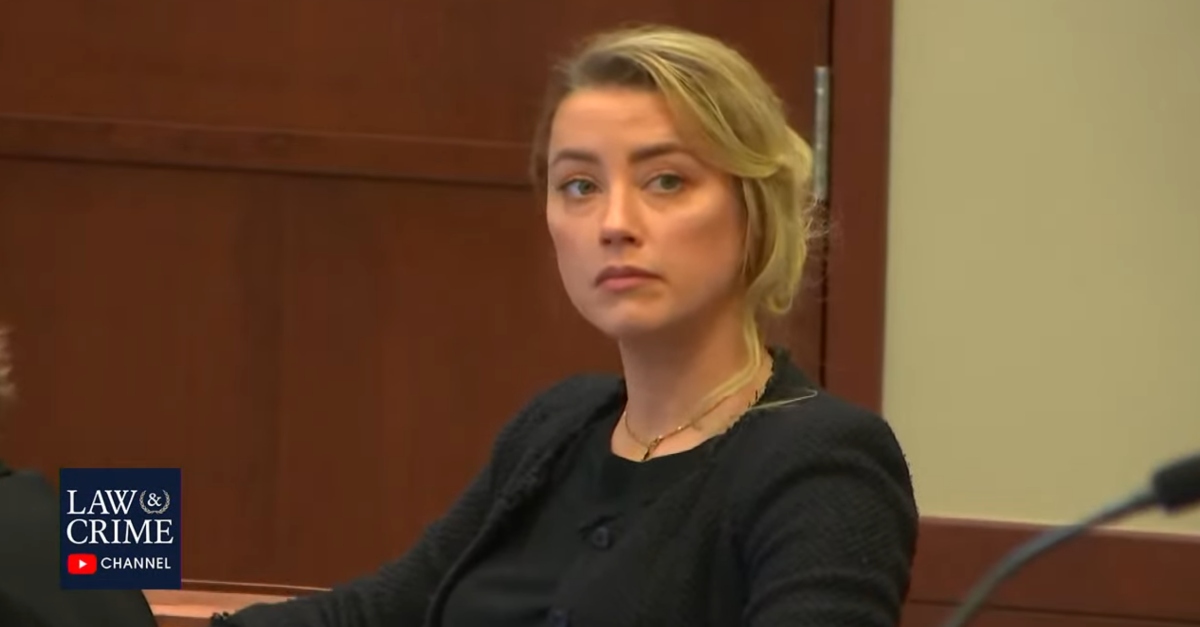 Actress Amber Heard has fired the crisis public relations firm that has been representing her during the defamation trial with her ex-husband Johnny Depp as she prepares to testify and present her case this week, Law&Crime has confirmed.

Heard had employed Precision Strategies until Thursday. A representative of the firm confirmed they are no longer working on Heard’s behalf but declined further comment.

“It’s certainly unusual to change teams right before the defense goes. Maybe things will improve for them, maybe they won’t,” a crisis communications expert told Law&Crime. The expert added, “It’s just inherent that you get negative headlines when you’re getting being attacked by the plaintiff on national tv for weeks at a time. You have to weather the storm and try to turn the page.”

To date, testimony has revealed Heard admitted to hitting Depp to their marriage counselor so that he wouldn’t leave arguments with her. Heard also says in audio recordings between she and Depp that she had hit him but not punched him. Last Thursday, one of Depp’s security team members, Starling Jenkins, testified that Heard told him that feces had been left in Depp’s bed, and that she described it as a practical joke gone bad.

Depp claimed Heard defamed him in December 2018 when she wrote an op-ed in The Washington Post, in which she claimed that two years prior she had become “a public figure representing domestic abuse.” While the piece did not name Depp specifically, it clearly referenced the time period when she obtained a domestic relations restraining order against Depp, claiming he physically abused her and that she feared for her life. Heard claims Depp was abusive throughout their relationship but Depp denies the allegations and says Heard was the abuser.

Last Thursday, Terence Dougherty, the general counsel for the American Civil Liberties Union, testified via video deposition that it was clear to him that the piece was about Johnny Depp since he had reviewed earlier drafts of it. Dougherty also testified that ACLU lawyers and communications staff had written the piece after meeting with Heard and that Heard’s lawyers had wanted some information taken out of the piece so it would not violate a non-disclosure agreement that was part of her divorce settlement.

Dougherty also testified that Heard had been made an ACLU ambassador after stating she would donate half of the $7 million settlement she reached with Depp to the organization. Testimony last week revealed a total of $1.3 million has been donated out of the $3.5 million. Dougherty said Heard has not made any donations since 2018 and that $500,000 of the total so far had come from a Vanguard account linked to her ex-boyfriend, Elon Musk. Dougherty said $100,000 came from Depp and $350,000 came directly from Heard. The remaining $350,000 came from an anonymous Fidelity account.

Heard’s lawyers contend she is having financial problems because of the ongoing litigation with Depp.

“It’s a tough task to try and convince people that they shouldn’t pay attention to or listen to the things they have already seen and heard for themselves,” a crisis PR insider told Law&Crime Sunday. “And what they’ve seen and heard so far has brought a ton of organic support to Johnny’s side. People can decide for themselves, but three weeks to turn that all around is going to be tough.”

Shane Communications has gone up against Depp in the past. In 2017, Shane worked with attorneys for The Management Group which was involved in a lawsuit with Johnny Depp. Depp had sued TMG, which had acted as the actor’s business managers, for $25 million alleging fraud. TMG had countersued claiming Depp was responsible for his financial troubles because of his lavish spending. The suit was later settled and the terms were confidential. A source said Depp benefited from the settlement, however.

Testimony is set to resume Monday with Depp calling more witnesses which will likely include a member of his security team and experts in financial damages and other areas. Amber Heard is expected to testify later in the week. Representatives for Johnny Depp declined comment Sunday.