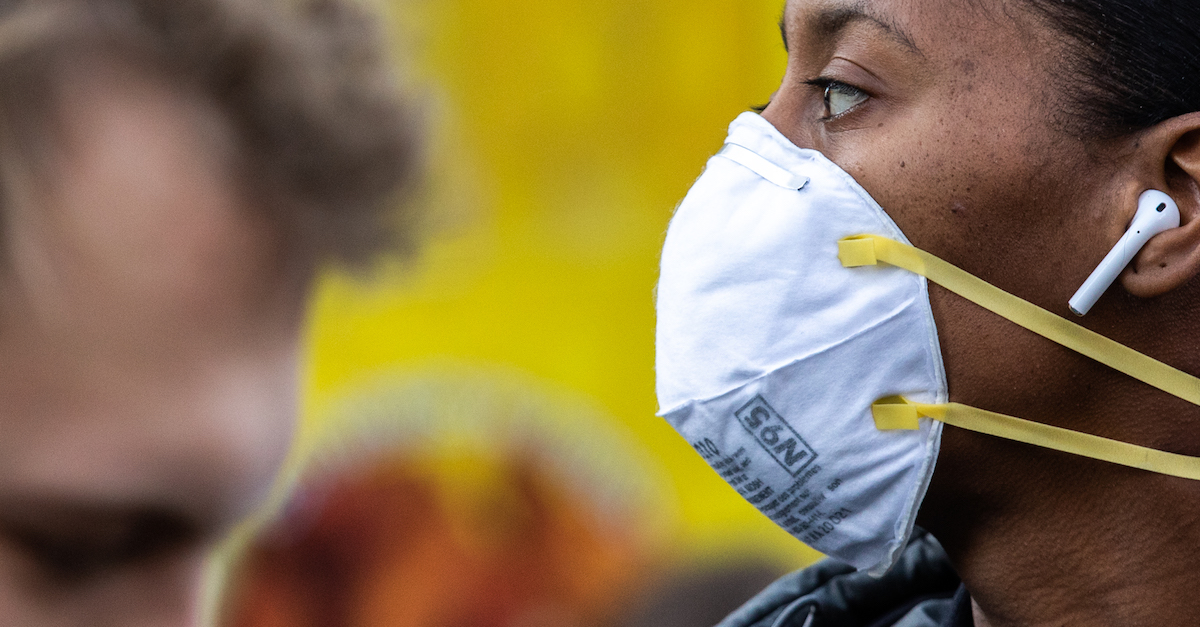 A small county in western Oregon which borders the Pacific Ocean has explicitly exempted “people of color” from wearing face mask “in public” during the coronavirus pandemic.

A directive dated June 16, 2020, signed by Lincoln County Public Health Administrator Rebecca Austin and Lincoln County Health Officer Dr. David Long, generally requires face masks in public, but then says certain “individuals do not need to comply,” including “[p]eople of color who have heightened concerns about racial profiling and harassment due to wearing face coverings in public.”

Other exempted categories include certain people with disabilities which prevent them from wearing masks, people with certain health conditions which are “exacerbated by wearing a face covering,” or “[c]hildren under the age of 12,” who are “encouraged to wear face coverings but [are] not required to do so.”

The directive says it neither “replaces” nor “eliminates other requirements imposed by the state of Oregon, including the Governor’s Executive orders and Oregon Health Authority Guidance.”

It also prevents law enforcement action and intimidation or harassment:

This Directive is self-executing. All persons in Lincoln County are expected to adhere to its terms. Violation of the Directive does not constitute or create grounds for private persons or public employees, including law enforcement, to stop, detain, issue a citation or undertake any other enforcement action under Lincoln County Code Chapter 10 against a person or persons who does not comply. No person shall intimidate or harass individuals who do not comply. This Directive is intended to induce voluntary compliance and compliment education and encouragement of use of face coverings to protect ourselves and our community.

The New York Post, in describing the county’s directive, cited discussions reported by CNN which said face masks can be used to racially profile members of the minority community or otherwise lead to erroneous assumptions that people of color are nefariously up to bad behavior. Those dangers appear in line with what the county directive states.

Legal classifications by the government which disadvantage particular groups on the basis of race are generally held to be unconstitutional when examined by the courts. Such classifications are subjected to the judicial test known as “strict scrutiny” and are held to be illegal unless they are necessary to achieve a compelling governmental interest. Discriminatory intent can be shown facially or through a discriminatory application or a discriminatory motive.  (Johnson v. California (2005) and Adarand Constructors, Inc. v. Pena (1995) explain this area of law. Johnson (quoting Adarand) says, “We have held that all racial classifications imposed by government must be analyzed . . . under strict scrutiny.”)

The Oregon directive is rare in modern times in that its words directly subject one race to a different standard than another. Therefore, it is facially suspect — or, said another way, it is legally concerning due to its wording. The equal protection clause of the Fourteenth Amendment, which applies notions of equality to the states, means literally what it says: equal.

Though most facially discriminatory laws are, indeed, struck down, there are exceptions. The courts carve out exceptions for laws which attempt to remedy past discrimination. Here, the Oregon directive appears to be accomplishing such a task. It seeks to remedy racial stereotypes and beliefs that members of the minority community are dangerous and may be targeted when they are seen, e.g., wearing bandanas as masks. However, there is an exception to the exception: the law allowing the government to remedy past discrimination applies when the government has been the one doing the discriminating. It doesn’t apply when the world in general is racist or discriminatory. This tributary of legal logic flows into the broader ocean (notion?) that the Constitution is a check on government, not a check on private conduct.

“This Court never has held that societal discrimination alone is sufficient to justify a racial classification,” a plurality of justices of the Supreme Court held in Wygant v. Jackson Board of Education (1986). “Rather, the Court has insisted upon some showing of prior discrimination by the governmental unit involved before allowing limited use of racial classifications in order to remedy such discrimination” (emphasis added).  Wygant examined the racially-motivated layoffs of some teachers, rather than others, “as an attempt to remedy societal discrimination by providing ‘role models’ for minority schoolchildren” (emphasis added).

“[T]he role model theory employed by the District Court has no logical stopping point,” Justice Lewis F. Powell Jr. wrote for the plurality. “The role model theory allows the Board to engage in discriminatory hiring and layoff practices long past the point required by any legitimate remedial purpose.”

“Societal discrimination, without more, is too amorphous a basis for imposing a racially classified remedy,” the plurality opinion noted.

Justice Sandra Day O’Connor concurred: “I agree with the plurality that a governmental agency’s interest in remedying ‘societal’ discrimination, that is, discrimination not traceable to its own actions, cannot be deemed sufficiently compelling to pass constitutional muster under strict scrutiny.”

Here, the Oregon directive becomes tricky. It attempts to prevent generalized racism, which is not a legally recognized reason to draft a facially discriminatory order, but it also attempts to prevent also racial profiling by the police, which is a type of government action. While the latter is a more legally surefooted area of concern, the document does not on its own attempt the level of deep, probing factual analysis generally required by the Supreme Court in cases involving this area of law (see Johnson, Stevens, J., dissenting).

The Oregon directive thus poses vexing issues constitutionally — assuming someone with standing cares to actually challenge it. A successful case against the directive would likely include arguments that the science underlying mandatory mask orders suggests that masks protect society from the virus at the point of transmission rather than the point of reception. Therefore, public health arguably suffers when health officers, no matter how benevolently, create carve-outs for particular racial groups.