Injured Cop Can’t Sue Black Lives Matter, But Can Sue One of Its Organizers 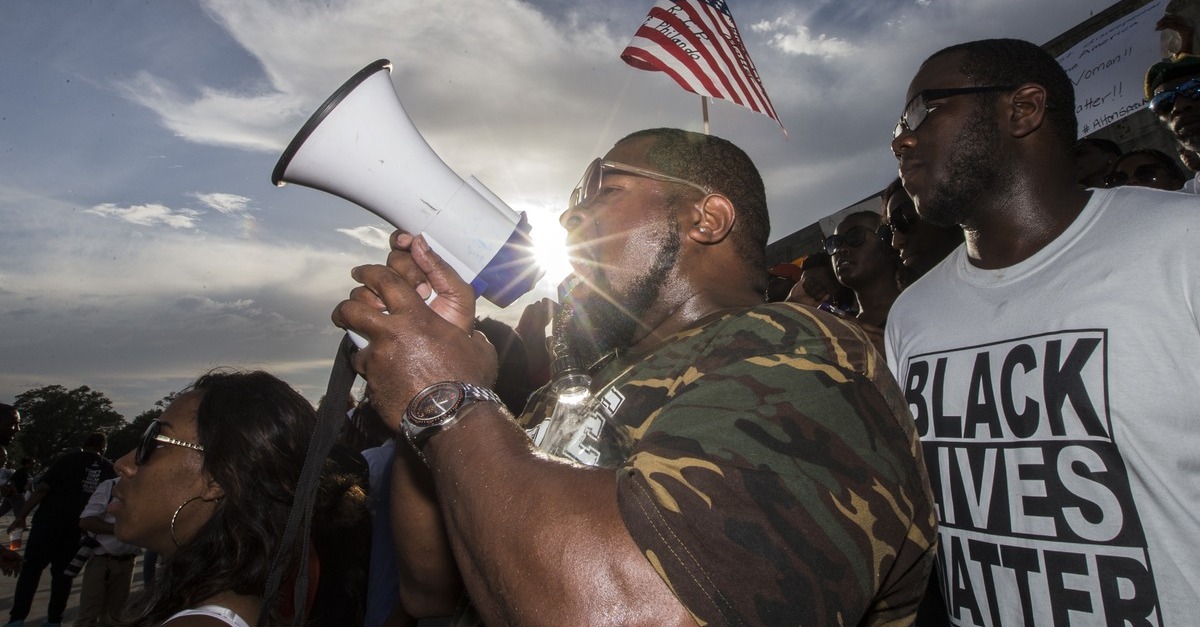 Late Thursday night, the Fifth Circuit ruled that a police officer can move ahead with his lawsuit against alleged Black Lives Matter activist DeRay Mckesson. The lawsuit’s “John Doe” Plaintiff is police officer Nick Tullier, an East Baton Rouge sheriff’s deputy who was left permanently disabled after Gavin Long‘s July 17, 2016 ambush on six police officers. Long’s attack had been a direct response to Alton Sterling‘s execution-style death at the hands of Louisiana police a week-and-a-half prior.

Tullier’s lawsuit, which had been dismissed by the District Court for the Middle District of Louisiana, sought to hold leaders of Black Lives Matter liable for coordinating anti-cop protests under a negligence theory; the gist was that these organizers knew (or at least should have known) there’d be violence and did nothing to promote safety. The plaintiff sued for injuries including loss of teeth, a jaw injury, a brain injury, a head injury, and lost wages, and demanded relief of at least $75,000, claiming:

The leaders of [Black Lives Matter] and Defendants, not only, incited the violence against police in retaliation for the death of black men shot by police, but also did nothing to dissuade the ongoing violence and injury to police. In fact, they justified the violence as necessary to the movement and war.

Tullier also claimed that Mckesson was part of a “civil conspiracy,” which, though not a claim in and of itself, is a legal theory that would impose liability on various people and groups for each others’ actions. The Fifth Circuit threw out the conspiracy claim, stating that Tullier’s complaint, “is vague about the underlying conspiracy to which Mckesson agreed, or with whom such an agreement was made.”

Thursday night’s ruling, however, was still a huge win for Tullier; the appellate court agreed with the officer that (at least based on the pleadings), Mckesson “knew or should have known” that the demonstration would turn violent – and allowed the negligence lawsuit to proceed.

In its opinion, the court cited specific instances of Mckesson’s negligent behavior as pleaded in court documents. Mckesson led demonstrators to illegally block a public highway and provoked a violent confrontation, while ignoring the predictable danger to police and bystanders. While the appellate court isn’t in the business of fact-finding, its ruling amounts to, “if the plaintiff can prove what he says he can prove, he should win on the negligence claim.”

The district court had also ruled on a potential defense — that the First Amendment shielded Mckesson and others from civil liability; the Fifth Circuit, however, wasn’t biting. It reasoned that while the demonstrators’ right to protest may be grounded in the First Amendment, that right does not excuse violence.

Finally, the Fifth Circuit grappled with one more interesting legal issue – whether Black Lives Matter (BLM) is a “national unincorporated association” or simply a social or community movement.   If the former, BLM is the kind of entity that could be sued and held liable in a lawsuit; if the latter, not so much. On this issue, the Fifth Circuit sided with the lower court, finding that because BLM isn’t the kind of organization that requires the payment of membership dues or insurance, and doesn’t own any property or have any bylaws, it’s not the kind of entity that should be defending lawsuits.

The court clarified that this ruling isn’t the result of finding that BLM is insignificant, but rather, unstructured:

We have no doubt that Black Lives Matter involves a number of people working in concert, but “an unincorporated association . . . . does not come into existence or commence merely by virtue of the fortuitous creation of a community of interest or the fact that a number of individuals have simply acted together.”

So for those keeping track, Tullier is 2 for 4. His lawsuit against Mckesson may proceed through discovery and trial (assuming it isn’t settled first), and a First Amendment defense won’t work. He will not, however, be permitted to proceed against BLM as an organization, nor will he be able to hold others accountable for Mckesson’s wrongdoing under a conspiracy theory. In essence, the Fifth Circuit’s ruling reduces Tullier’s case to one against Mckesson as an individual, but in doing so, it names that case a likely winner.