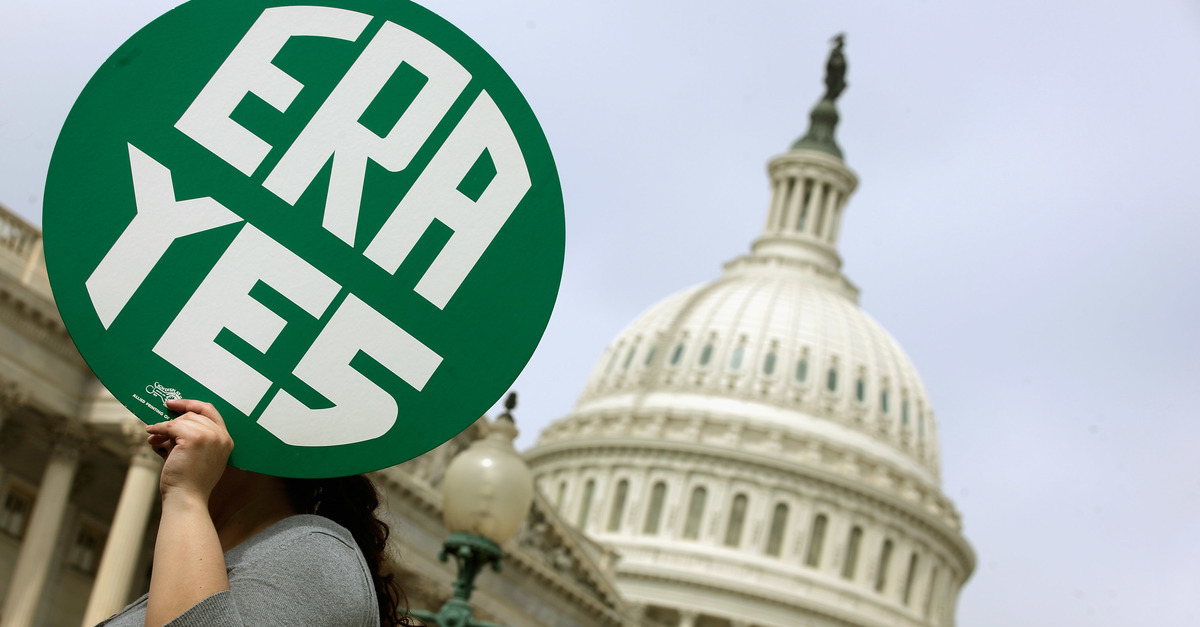 The Virginia House of Delegates and State Senate voted Wednesday, making Virginia the 38th (and potentially final) state to pass the Equal Rights Amendment (ERA). Patricia Arquette is done testifying, the necessary ¾ votes are in, and Midge Maisel is standing up to Phyllis Schlafly. The time for equal rights for women must finally be upon us! Well, not quite. Given the ERA’s long and winding history, it still has a way to go before becoming the 28th Amendment to the United States Constitution.

First, a quick reminder about what the ERA is.

The ERA is an amendment to the United States Constitution, which, as proposed would read as follows:

Section 1. Women shall have equal rights in the United States and every place subject to its jurisdiction. Equality of rights under the law shall not be denied or abridged by the United States or by any State on account of sex.

Section 2. Congress and the several States shall have the power to enforce, by appropriate legislation, the provisions of this article

Section 3. This amendment shall take effect two years after the date of ratification.

If the U.S. Constitution were amended to include this Article, it would establish equality for women as a matter of federal law, and would eradicate any suggestion that states can determine for themselves what (if any) level of gender discrimination will be tolerated.

The effect of Virginia’s vote is a bit confusing, largely because the ERA’s history is pretty complex.

The current version of the ERA was introduced by Rep. Martha Griffiths (D-Mich.) in 1971, where it was approved by both the House and the Senate. Then, as required by Article V of the U.S. Constitution, it was submitted to statute legislatures for ratification. It’s been languishing there ever since.

Later, after some anti-ERA movements gained traction, five of the 35 states actually rescinded their ratifications, leaving the final count eight states short of the necessary ¾.

What about that 1979 deadline? Hasn’t it passed?

Possibly, but no one has ever really acted as if the deadline has expired. President Jimmy Carter and Congress signed a joint resolution extending the ratification deadline to June 1982. When that deadline passed without the ERA passing, Congress immediately re-introduced the Amendment, and has continued to re-introduce it prior to every session of Congress thereafter. In 2017, Nevada became the 36th state to ratify the ERA, followed by Illinois in 2018. On Tuesday, April 30, 2019 the House Judiciary Committee held a hearing on restarting the process to ratify the ERA – the first time ERA discussions have occurred on Capitol Hill in 36 years.

However, there’s already major disagreement over what the Virginia vote means.

The Trump Administration has already gone on record saying that the deadline to pass the ERA has officially passed.

Earlier this January, the Office of Legal Counsel (OLC) issued an official legal opinion stating that the proposed Amendment had already expired. It’s precisely that legal question which will need settling before the ERA becomes part of the United States Constitution. That’s where the judiciary will come into play.

Courts are being asked to decide whether the deadline had expired, or whether the votes in favor of the ERA could culminate in officially amdending the Constitution. A lawsuit has already been filed U.S. District Court in Boston, arguing that the congressional deadline for ratification was not binding because it failed to specifically include the text of the ERA. Simultaneously, the states of Alabama, Louisiana and South Dakota have filed a federal lawsuit looking to block the Amendment.

At this point, it isn’t clear how the relevant courts may rule. ERA supporters have pointed out that the 27th Amendment, first written in 1789, was not adopted until more than 200 years later. So, there’s at least some precedent for a protracted amendment process.

Virginia will attempt to record the Amendment.

While the courts are grappling with questions of timing, Virginia is expected to proceed as though the Amendment has officially been ratified. This will mean Virginia’s submitting copies of its state’s resolution to the U.S. archivist David S. Ferriero to be recorded.

Ferriero, however, isn’t about to take this matter into his own hands; last month, he released a second statement saying the National Archives and Records Administration is requesting guidance from the Department of Justice on ratification of the ERA, and mentioning the various pending lawsuits.

Where does that leave the ERA?

Essentially, we are still in ERA-limbo. There may (or may not) be an officially-recognized Amendment capable of being adopted by ¾ of the states–depending on whether a court rules that the congressional extension was controlling. We may (or may not) have the requisite ¾ states to pass that Amendment–depending on whether any of the states attempting to rescind their passage succeed in doing so. Once those two questions receive final answers, we’ll know whether we are still in the vote-to-amend part of the process, or whether it’s time to simply adopt the ERA and start fighting about something else.