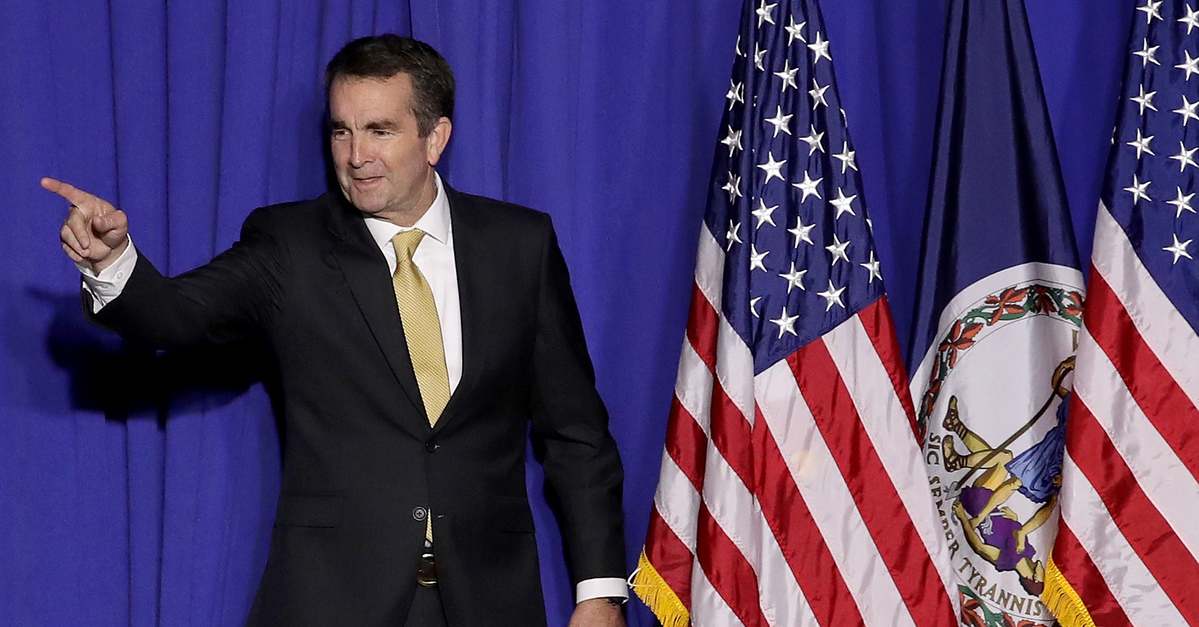 Virginia’s Democratic Governor Ralph Northam is facing a groundswell of calls for his resignation after it was revealed on Friday night that his medical school yearbook page featured a photograph of two men dressed up in racist blackface and Ku Klux Klan costumes. Northam has, so far, resisted all calls to vacate his office.

Over the course of a series of statements issued late Friday, Northam fessed up to and apologized for his past conduct–and seemingly admitted to being one of the men in the photograph. But not so fast. On Saturday morning, however, Northam began calling Virginia Democrats to insist that he wasn’t actually one of the people in the picture and said that he had been reaching out to old medical school friends in order to find out who those men were.

Virginia Democratic Party Chair Susan Swecker wasn’t having any of those excuses.

“We made the decision to let Governor Northam do the correct thing and resign this morning—we have gotten word he will not do so this morning,” she said on Saturday. “We stand with Democrats across Virginia and the country calling him to immediately resign.”

The Democratic Party of Virginia later issued a full statement disavowing Northam and calling for his immediate resignation.

So, what happens if and/or when Northam realizes he’s fully out of allies and his $175,000-per-year salary just isn’t worth the fever-pitch of condemnation and ridicule?

The law on point here is contained in the Constitution of the Commonwealth of Virginia, Article V, Section 16. This lengthy section reads, in relevant part:

In the case of the removal of the Governor from office or in the case of his disqualification, death, or resignation, the Lieutenant Governor shall become Governor.

That’s fairly straightforward and would mean that Lieutenant Governor Justin Fairfax would assume the role of governor in the event that Northam finally says adios to the Executive Mansion in Richmond. Fairfax is a rising star in Virginia politics. A former Assistant U.S. Attorney and law clerk in the federal court system, Fairfax would also be only the second black governor in Virginia history–after Douglas Wilder was narrowly elected to become Virginia’s first black governor in 1985 (despite polling well above his GOP opponent for almost the entirety of the election contest.)

Virginia has had 73 governors since it was founded in 1788. None of them have ever resigned or been forced from office before. And, as noted, Northam has up to now indicated he’s not going anywhere. Where does that leave his critics?

There is one arguable source of ammunition.

This process would be similar to a recall effort. To initiate the procedure described above, a petition signed by ten percent of registered voters who took part in the last gubernatorial election–the election in which Northam secured his now-shaky office–would then be submitted to a circuit court.

There wouldn’t be an actual recall vote, however, a circuit court would simply have to decide whether Northam’s apparently racist past was enough to remove him from office. This process is untested so it would be an incident of first impression for the courts.

One argument might hold that the removal procedure only applies to conduct that occurred while in office. A counter-argument might say that Northam’s handling of the blackface/KKK controversy has been incompetent to the point of having a “material adverse effect” upon the governor’s office.

Neither argument is necessarily a winning argument. Whether or not a 35-year-old photo–and the resulting media circus surrounding said photo–would implicate the above statute is an open question.