Woman Sues Fertility Doctor for Secretly Impregnating Her Mother in the 1980s, Failing to Reveal the ‘Horrific Truths’ When Treating Her Decades Later 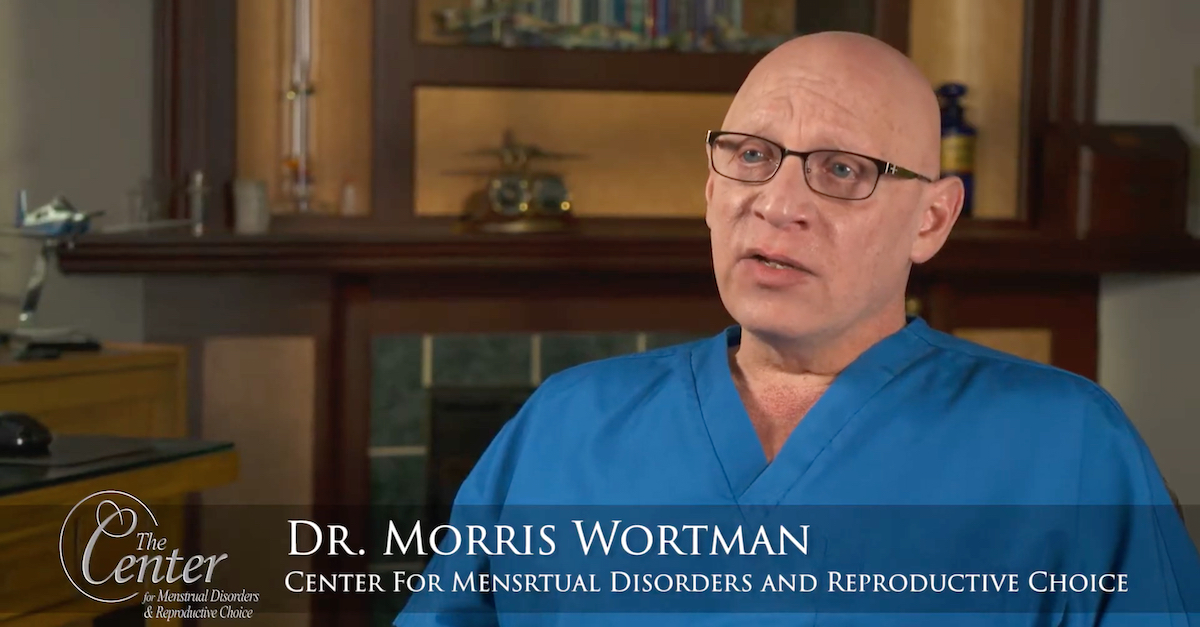 Dr. Morris Wortman appears in a screengrab taken from a YouTube promotional video.

An Upstate New York woman is suing a Rochester, N.Y. fertility doctor on claims that the doctor used his own sperm to impregnate the woman’s mother in the mid-1980s. The doctor then allegedly spent nearly a decade treating his own subsequent offspring as an adult woman decades later.

The plaintiff, whose attorney has asked that she not be named, says she learned the “horrific truths” through online DNA tests that her mother’s doctor was her own father.  The named defendants in the lawsuit are Dr. Morris Wortman and various affiliated companies.

The lawsuit says the plaintiff’s mother sought fertility treatments because the plaintiff’s father was “unable to bear his own biological children” after he was struck by a drunk driver and severely injured more than a decade before the plaintiff was born.

The plaintiff’s mother sought treatments from Wortman starting around 1983. The lawsuit alleges:

The lawsuit says the plaintiff’s parents requested a donor “with a clean health history, with no known mental or physical conditions, disorders, or anomalies that could be passed genetically to their child.” They also sought a donor “not be from any one specific ethnic background, nor have any predominant ethnic or genetic heritage at all. In this way, the child could match their own mixed ethnic and cultural backgrounds.” Specifically, because their families were “of mixed northern European descent,” they “specifically requested the donor not be predominantly Italian or Jewish in ethnicity, as neither ethnicity was present in their own family histories.”

According to the lawsuit, Wortman told the plaintiff’s parents that there was a “University of Rochester Medical Center medical student who was willing to donate his live sperm to help the [parents] to conceive.” He assured the parents that the donor otherwise met their requirements as to ethnicity.

The parents paid $50 per donation of so-called “live sperm.” But the checks were made out to Wortman personally, the lawsuit says:

And apparently, this alleged “medical student” was willing and able to perform. Again, per the lawsuit:

Wortman allegedly told the plainitff’s parents that the donor would only be used to inseminate the plaintiff’s mother. According to the lawsuit, insemination procedures continued between late 1983 and January 1985 “two to three times monthly in either his office or at Highland Hospital in exchange for the parents’ payment of $50.00 in cash or check for each insemination.”

The lawsuit says the plaintiff’s parents told the plaintiff when she was eight years old that she was conceived through the help of Dr. Wortman and that “Wortman was revered in Plaintiff’s family by her parents and by Plaintiff as she grew up because of what he had done for them.”

The plaintiff’s mother sought information about the sperm donor in the 1990s when the plaintiff was in high school learning about genetics, the lawsuit says; Wortman told her that “he did not retain medical records from his fertility practice from the time period in which Plaintiff had been conceived.”

The plaintiff married and gave birth to two children; however, she sought treatment from several doctors in the Rochester, N.Y. area for issues the lawsuit describes as “gynecological problems including, among other issues, irregular menstrual bleeding.” Her quest for treatment ultimately lead her to Dr. Wortman. She met Wortman, told the doctor that he had treated her mother, and underwent her own treatments — including the insertion of an IUD — for nine years, the lawsuit says. In other words:

Through it all, the lawsuit says the plaintiff mentioned to Wortman and to his staff that she was trying to locate her biological father using DNA technology. Things started to unravel in 2016, when the plaintiff found out she was 50% Ashkenazi Jewish. According to the lawsuit, the plaintiff told Wortman’s nurse, Amy Daggett, of this fact in 2016. Through Daggett usually performed the plaintiff’s annual exams, Wortman said all of the plaintiff’s future appointments should be with him and not with Daggett starting in 2017. He also started talking to the plaintiff about his family.

The plaintiff learned through online genetics databases that she had two half-brothers who were also 50% Ashkenazi Jewish, the lawsuit says. It alleges that the plaintiff began to “experience emotional stress and physical symptoms that affected her well-being” as a result of what she was learning about her genetic history. “Plaintiff suffered increased anxiety, increased moodiness, and more migraine headaches than normal,” the lawsuit says. And the documents say Wortman was flippant about her concerns:

At an appointment in early 2018, Plaintiff reported having significant mood swings and severe PMS-like symptoms that were uncharacteristic. Plaintiff again re minded Defendant Wortman at this appointment that she was conceived through his fertility treatment of her mother and his help with donor insemination, and that she learned her donor was Ashkenazi Jewish. Defendant Wortman commented to Plaintiff that her reported mood swings, severe PMS symptoms and hormone-based gynecological issues were because she was now a “Jewish American Princess.” He made this comment seemingly in jest, as Defendant Wortman himself is Jewish. Plaintiff was disturbed by this encounter and thought Defendant Wortman’s comments off-putting and dismissive.

Again, from the lawsuit:

He then spoke to her at length about his personal experiences as a child and certain formative memories he had that shaped the way he practices medicine. He shared that his parents were Holocaust survivors and shared about experiences from his childhood growing up in the New York City area. He shared a story about his family’s physician who would trade physician services to his family for his mother’s soup. He also recounted his training by a doctor in the Rochester area who helped shape the way he practices medicine and his belief in helping people.

At the very end of the appointment as Plaintiff was getting ready to leave and as he was writing something down he started to chuckle to himself and said out loud,“ You’re a really good kid, such a good kid.”

At that point, Plaintiff believed for the first time that Defendant Wortman was trying to explain why he had impregnated so many women with the same sperm donor, and for the first time, Plaintiff believed there was a possibility Defendant Wortman could be the donor himself. But she was in shock and disbelief that he would continue [to] treat her as her gynecologist if she were his biological daughter.

The lawsuit alleges that Wortman also invited his wife, Rebecca, into an exam room to look at the plaintiff. Rebecca Wortman managed the practice.

Eventually, the plaintiff learned in 2021 that one of her half-brothers shared a 99.99% DNA match with Wortman’s daughter. “Plaintiff now knew she was Defendant Wortman’s biological daughter,” the lawsuit says. But it says she was shocked that Wortman continued to treat her while knowing she was his own biological daughter for “almost a decade.”

Upon information and belief, Defendant Wortman has been diagnosed with and treated for mental illness, including bipolar disorder.

Upon information and belief, Defendant Wortman has a biological brother named Jack Wortman, who has been diagnosed with and treated for mental illness since infancy, including schizophrenia.

Upon information and belief, Defendant Wortman’s biological mother was diagnosed with and treated for mental illness, including anxiety and depression.

Upon information and belief, as a physician, Defendant Wort man knew or should have known that psychological disorders and mental illness, specifically bipolar disorder, schizophrenia, anxiety, and depression, are highly genetically inherited psychiatric disorders.

The lawsuit says Wortman’s ethnic and genetic line is also susceptible to “an increased risk of certain genetic disorders, autosomal recessive diseases, breast cancer, colorectal cancer, and for being carriers of these biological risk factors.”

“Defendant Wortman deprived Plaintiff of this crucial medical information when he did not tell Plaintiff he was her biological father, despite being her physician, and despite the fact this information applied to her physical and mental health and the health of Plaintiff’s children,” the lawsuit continues. “Defendant Wortman, Nurse Daggett, and other employees of The Center for Menstrual Disorders intentionally and/or negligently withheld this crucial medical information from Plaintiff knowing that she would be harmed by this omission.”

Daggett is not a named defendant in the case, but Wortman’s businesses are.

The lawsuit, which was filed in New York State Supreme Court in Monroe County, alleges ten separate causes of action against the various defendants in various orders: medical malpractice; lack of informed consent; battery; intentional infliction of emotional distress; negligent infliction of emotional distress; negligence (against some of the defendants); negligence (against another defendant); fraud; constructive fraud; and fraudulent concealment. The plaintiff is seeking compensatory, exemplary, consequential, and punitive damages “in an amount to be proven at trial.” She’s also seeking “interest, costs, and attorneys’ fees.”

Wortman reportedly did not respond to a request for reaction or comment when reached by Rochester, N.Y. CBS affiliate WROC.