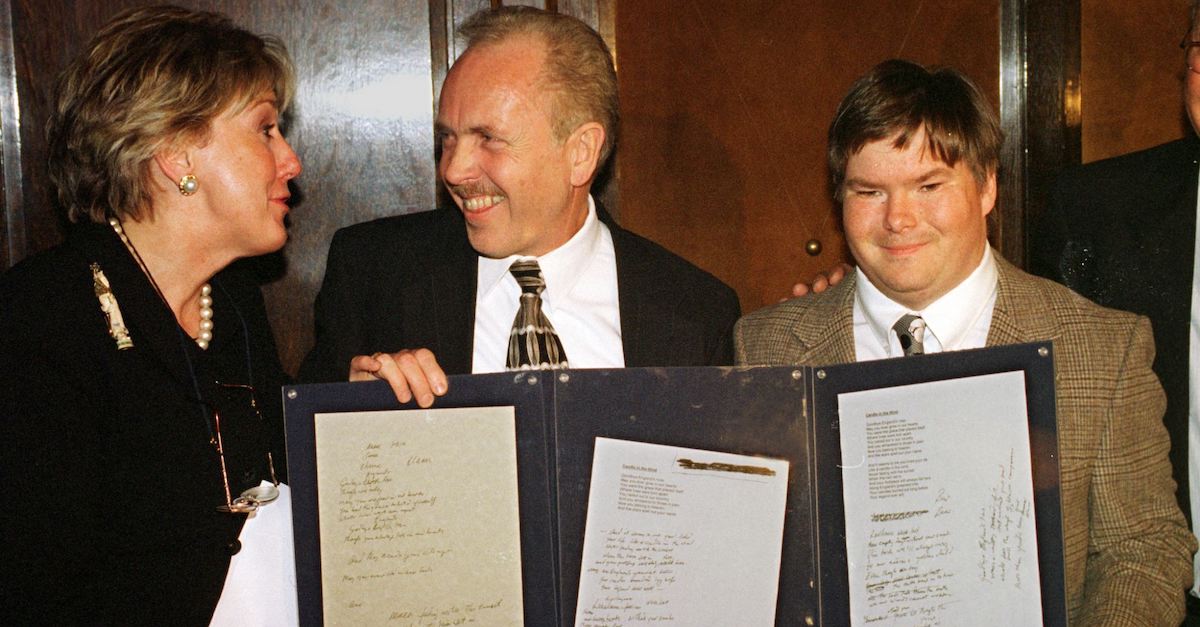 Bradford Lund, the 50-year-old grandson of Walt Disney, filed a lawsuit on Thursday against a Los County Superior Court judge for violating his 14th Amendment right to due process of law.

The lawsuit, which was filed in the U.S. District Court for the Central District of California, is related to a years-long feud among Disney’s progeny over hundreds of millions of dollars in inheritance money. “The Disneys: Not the happiest family on Earth,” blared the headlines. In that story, NBC News delved into the family origins and the bitter rift:

Michelle and her twin brother, Brad Lund, are the grandchildren of late entertainment titan Walt Disney. In the 1950s and 1960s, their father Bill, a real estate developer, helped Walt scout the swampy acreage in Central Florida that would become Disney World.

Bill married Walt’s daughter, Sharon, in 1968, and the twins were born in 1970. Before she died in 1993, Sharon set up trust funds for Brad and Michelle that are now worth about $400 million. According to the terms of the trust, the siblings were each to receive annual payments, plus lump sums at five-year intervals.

That was how it was reported in 2013, but the legal battle followed Michelle Lund’s aneurysm in 2009. When the parties jockeyed over millions of dollars, it was alleged that Bradford Lund had a “chronic cognitive disability” and was not competent to make decisions about funds, but that’s not what two judges found. Judge Robert Oberbillig and Judge Mitchell L. Beckloff, of Arizona and California respectively, each found Lund had capacity and each declined to appoint what is called a “guardian ad litem” or GAL–much to the dismay of trustees.

A guardian ad litem is Latin legalese for a court-appointed legal guardian, typically appointed when a person is a minor or legally incompetent.

The lawsuit we now discuss was filed because the judge, despite these prior findings, appointed a temporary guardian ad litem– sua sponte (on his own) and without a hearing–to control affairs related to Lund’s inheritance. According to the complaint, Judge David J. Cowan unlawfully did so–and to the benefit of “hostile trustees” who are working “in concert” with Lund’s “estranged family members”:

In the face of these specific findings and the decade long history of litigation without any guardian ad litem, and without notice or any hearing, the Hon. David J. Cowan, on his own sua sponte Order to Show Cause, appointed a limited purpose guardian ad litem over Mr. Lund without any evidentiary hearing or notice. In so doing, Judge Cowan refused to take judicial notice of the Arizona decision in the form of either judicial comity or full faith and credit.

That imposition of a guardian ad litem has imposed significant constraints on Mr. Lund’s liberty and property interests in violation of the 14th Amendment, and his constitutional right to due process of law by not having any hearing. Indeed, his attorneys (3 current and 1 former) have filed affidavits under oath which stated that Mr. Lund is, in fact, competent, and does not need any guardian ad litem – consistent with the specific findings of fact made by Judge Oberbillig in Arizona, and Judge Beckloff in California, that were completely ignored by Judge Cowan.

As noted by the Hollywood Reporter, it seemed as if this lengthy dispute had finally come to an end in March 2019, when a settlement was reached. But the judge expressed concerns:

The probate judge raised concerns about the settlement, particularly with respect to how it was “silent” on the “suitability of the proposed management of the Trusts going forward of these very large amount of funds for a person with limited intellectual abilities.”

Cowan wanted to know why various conflicts of interest shouldn’t disqualify proposed replacement trustees, but perhaps of most consequence, the judge believed that a temporary assignment of a limited guardian ad litem for Brad was warranted until he could get a handle on the situation.

Lanny Davis, one of three attorneys representing Lund in the matter, said Thursday that the complaint speaks for itself.

“Regarding the federal civil rights act complaint filed today by Bradford D. Lund, the grandson of the late Walt Disney, against Superior Court Judge, David J. Cowan, we are not going to comment on this case at this time. The complaint speaks for itself. But we will have more to say in the days ahead,” Davis said in a statement to Law&Crime.

You may remember Davis for his representation of Bill Clinton and Michael Cohen.

A hearing was scheduled for 10 a.m. PST on Friday.

You can read the complaint below.