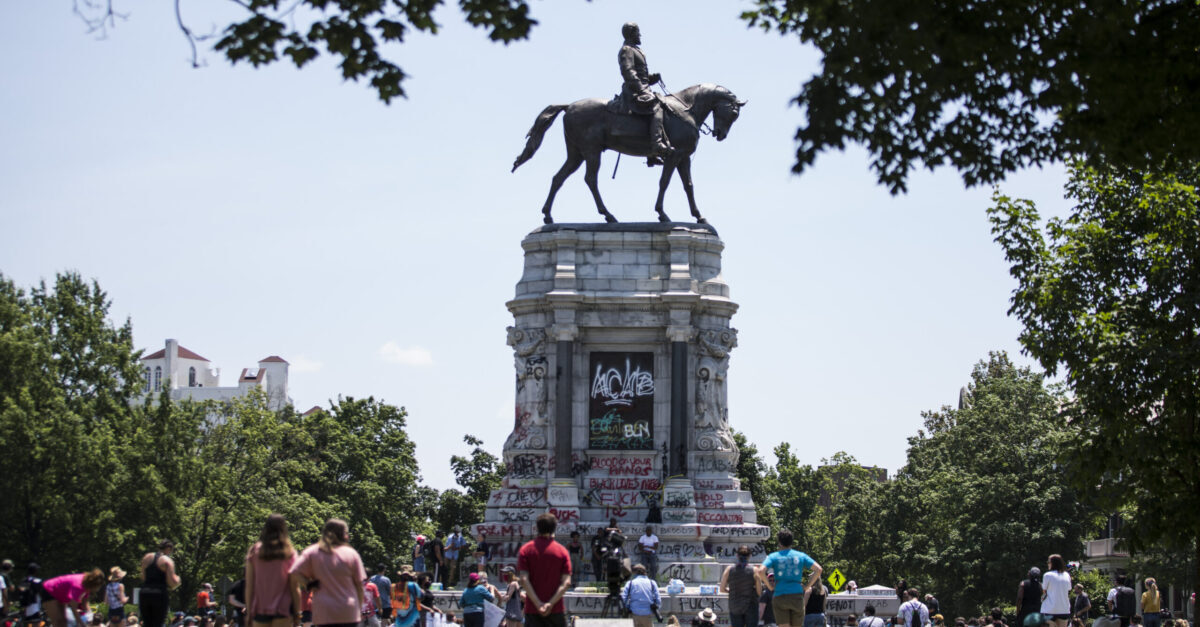 A Virginia man who on Monday asked a federal judge to prevent Governor Ralph Northam (D) from removing a statue of Robert E. Lee from a park in Richmond is in for a rude awakening. First, his claim makes little sense under the law. Second, he asked the court to hide his identity. It didn’t. Everyone can look at the court file and see who he is.

And, there’s more: the plaintiff not only wants Northam to keep the statue in place; he apparently wants a federal judge to force all future governors to also keep it in place. In other words, the statue would seemingly have unending federal legal protection. And he wants the statue cleaned and repaired. And he’s asking a federal judge to order the governor to clean it and repair it within 10 days.

According to public court documents filed in the Eastern District of Virginia and reviewed by Law&Crime, the plaintiff, William F. Davis, is proceeding without an attorney. “[D]ue to the urgency of the matter, I have not had time to contact potential counsel, nor do I have the resources to fund a potentially lengthy legal battle without assistance,” he wrote in federal court documents available online.

“The issue is the Governor of Virginia’s stated intent to quickly remove the statue of Robert E. Lee from Monument Avenue in Richmond, Virginia,” Davis told the judge.

“The Court is asked to initiate an injunction to immediately cause the Governor and any others to Cease and Desist from any action that is a part of, or leading to removal of the Robert E. Lee statue from Monument Avenue until such time as the Court has been able to rule in the matter,” he requested.

Davis argued that the statue should not only be retained in place, but also repaired after “riots” were left to spread and were “not controlled by any government agency”:

Further, as the statue, and the land on which it stands is owned by the Commonwealth of Virginia, and the statue has been defaced by vandals during riots over several days, and the images painted on the pedestal are profane, insulting and degrading, and that the riots were not controlled by any government agency, that the Commonwealth of Virginia be ordered to immediately begin work to restore the statue, pedestal and grounds to pre-riot appearance.

Davis went on to chide Northam for “solely and unilaterally determin[ing] that the statue would be removed” and said the governor’s “decision was made in error, in haste, in fear and as a knee-jerk reaction to seven days of riots and property destruction in the City of Richmond.”

Davis apparently believes the statue should remain in place forever under federal protection from any future governor:

The Plaintiff seeks a permanent Injunction, ordering the Defendant and his successors to cause the statue to remain undisturbed in its present location on Monument Avenue in Richmond . . . [t]he Plaintiff further seeks an injunction, ordering the Defendant to immediately initiate cleaning and restoration of the statue, and that the process be completed within 10 calendar days.

“[W]ithout injunctive relief, irreparable harm to the statue, listed in and protected under the National Register is likely to occur,” Davis wrote. 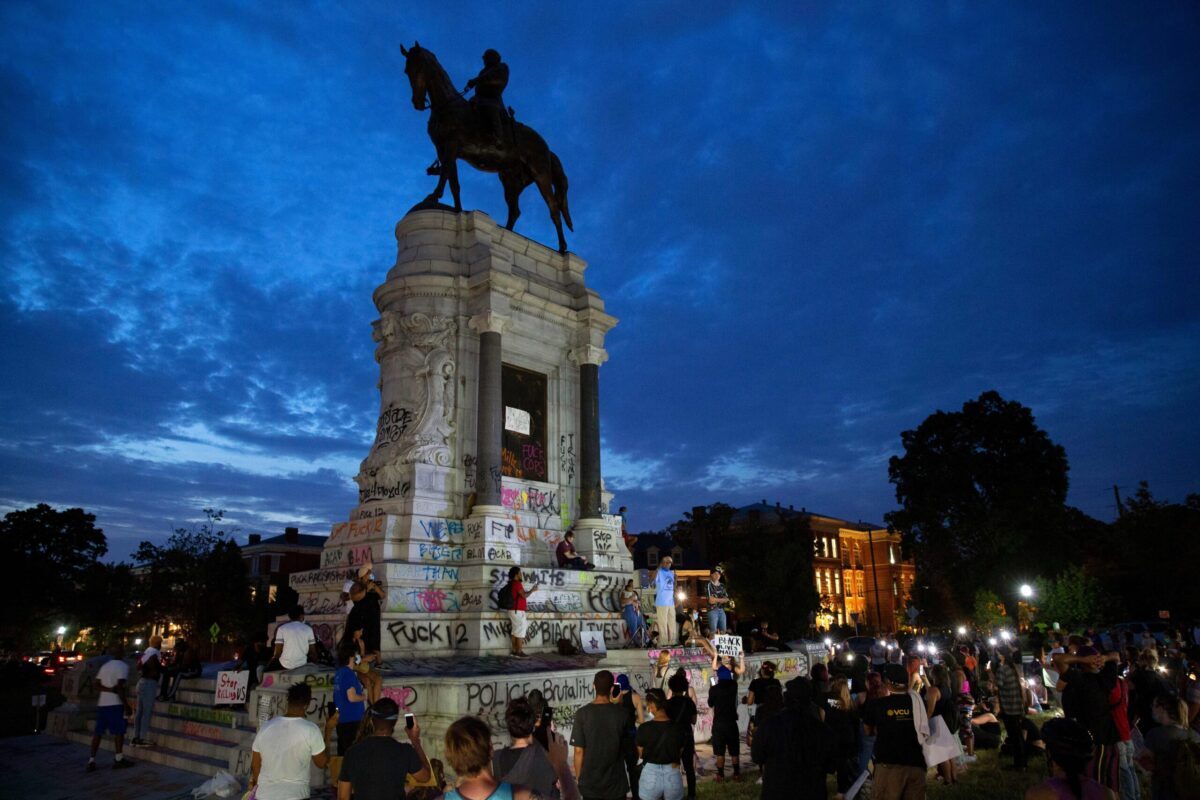 Davis’s legal claim, as he puts it, is pinned to “Title 36, Chapter 1 Part 60 of The United States Code.” (He really means the Code of Federal Regulations.) In his view, that rule “generally prevents removal or destruction of a National Historic Landmark,” and he articulates that the Lee statue in question has been listed on the appropriate register since 2007. (The statue was actually erected, he says, in 1890.)

Davis’s problem is that the word “destruction” appears nowhere in § 60.15, which he cites. Instead, § 60.15 deals only with the removal of properties from the National Register listing — in other words, the documentation rolls. It does not deal with the removal or destruction of any historic properties physically. The National Register is just what it says it is: a registry. While the code contains suggestions for preserving historic structures in situ or even moving them in lieu of demolition, it also explicitly allows most owners to demolish listed properties: “Listing of private property on the National Register does not prohibit under Federal law or regulation any actions which may otherwise be taken by the property owner with respect to the property.” Even the National Park Service admits that an owner can alter a listed property “up to and including destruction, unless the property is involved in a project that receives Federal assistance.”

Bottom line: Davis’s claim will likely not win on the grounds he states.

And, everyone now knows who he is despite this request contained within the court documents he filed:

Given the racially and politically charged nature of the issues regarding the Robert E. Lee Statue, the Court is requested to refrain from public disclosure of personal information of the first party, with at the Court’s discretion an exception being to the Governor himself, and then, require that the Governor prevent public disclosure of the first party’s personal information, especially full name, address and/or telephone number.

The judge overseeing the matter, Henry E. Hudson, denied Davis’s request to proceed without paying fees because Davis didn’t file the appropriate paperwork to entitle him to do so.

Davis’s claims are similar to, but distinct from, claims filed by a different resident. In the other proceeding, a state court judge granted a 10-day injunction requested by William C. Gregory which banned Northam from taking down the Lee statue. Gregory, according to a CNN report, says he is the great-grandson of “two parties and signatories to the deed” which turned the land over to the state upon which the statue sits. In the deed, Virginia promised to “faithfully guard and affectionately protect” the monument, CNN said.

Northam said the Lee monument is “divisive and it needs to come down.” An attorney with his office said the monument was constructed “to fit a narrative that minimized a devastating evil perpetrated on African Americans during the darkest part of our past.”

Many living descendants of famous Confederates have called for statues such as this one to be removed.