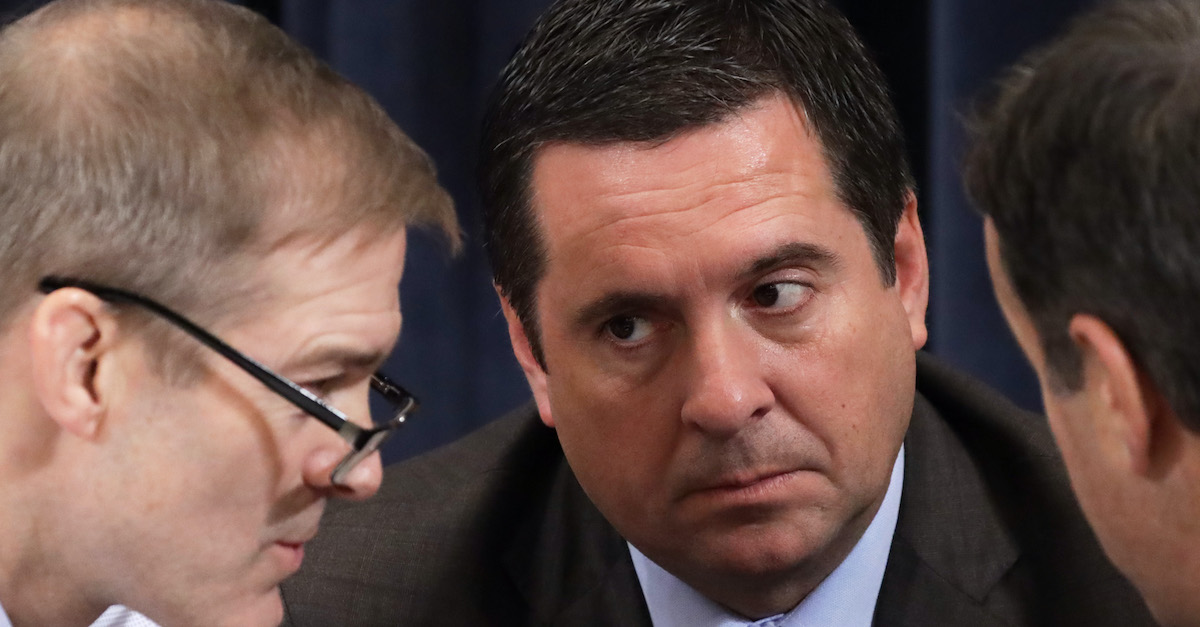 In a move that’s a lot like a teacher deciding to take an exam for a student, a Trump-appointed U.S. District Judge for the Northern District of Iowa on Tuesday re-wrote substantial portions of a defamation lawsuit filed by Rep. Devin Nunes’s (R-Calif.) father and brother. The judge, rather than dismiss the case for failing to be properly pleaded, saw the apparent need to explain, in detail, how the Nunes’s lawyers should have argued how journalist Ryan Lizza defamed the plaintiffs in an article titled “Devin Nunes’s Family Farm is Hiding a Politically Explosive Secret.”

You may remember that Nunes sued Lizza and Hearst Magazine Media in Oct. 2019 for $75 million over the allegedly defamatory Esquire piece Lizza wrote about the Nunes family farm. The complaint we now discuss appears to be distinct from but related to the Rep. Nunes complaint of 2019.

Anthony Nunes Jr. (Devin Nunes’s dad), Anthony Nunes III (Devin Nunes’s brother) and NuStar Farms (the LLC that operates an Iowa dairy farm) are named as the plaintiffs in a $25,000,000 lawsuit against Lizza and Hearst that was filed in Jan. 2020. In short, Rep. Nunes is not named as the plaintiff on the action, but the docket shows Judge C.J. Williams is presiding over both cases. Attorneys Joseph Feller and Steven Biss also appear on filings in both cases.

Now that we’ve gotten that bit of procedural housekeeping out of the way, let’s move to the civil procedure substance of the issue. Judge Williams told the Nunes family that they and their attorneys didn’t explain at all how various statements they highlighted as false and defamatory were actually false and defamatory.

“When a pleading contains nothing more than conclusions, however, those conclusions are not entitled to the assumption of truth,” Judge Williams noted, before granting the defendants motion requiring the plaintiffs to file a “more definite statement” of factual allegations.

“When a ‘pleading fails to specify the allegations in a manner that provides sufficient notice, a defendant can move for a more definite [statement] under Rule 12(e) before responding,'” Judge Williams wrote. “In granting a Rule 12(e) motion, a court ‘may insist that the plaintiff ‘put forward specific, nonconclusory factual allegations’ that establish [the claims alleged] in order to survive a prediscovery motion for dismissal or summary judgment.”

Although the judge declined to dismiss the case outright, this will force the plaintiffs to drill down on what is false and defamatory in each of the following bullet-pointed lines from the Lizza article: 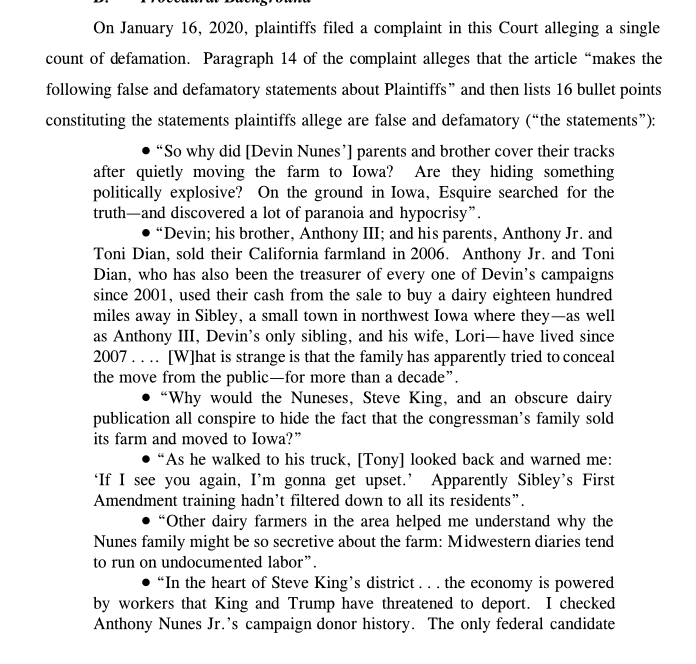 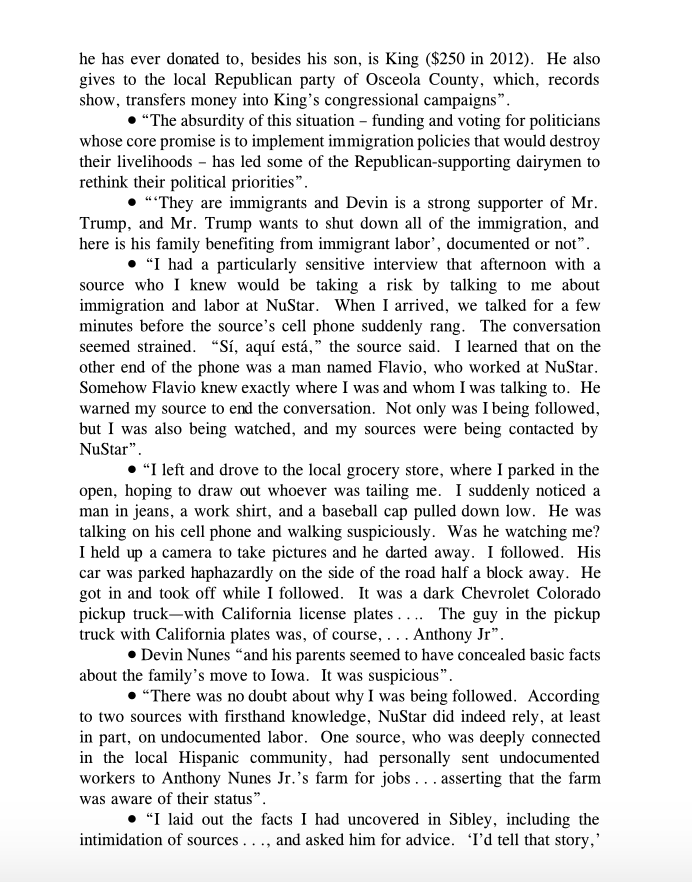 Judge Williams said the plaintiffs simply didn’t do the legal legwork required to create a sufficient pleading of facts. “Conclusory allegations” about a “defamatory gist” and citing to the conservative website The Federalist didn’t cut it, Williams said:

Paragraph 19 asserts that the article was “knowingly and intentionally flawed,” that “Lizza came to Sibley with a preconceived storyline,” and that he “fabricated a ‘secret’ where none existed,” citing as authority the Federalist’s website that makes a personal attack on Lizza.

The judge exposed the “deficiency” of the pleadings by walking through each of the bullet-pointed allegedly false and defamatory statements pictured above and doing the plaintiffs’ work for them:

1. “So why did [Devin Nunes’] parents and brother cover their tracks after quietly moving the farm to Iowa? Are they hiding something politically explosive? On the ground in Iowa, Esquire searched for the truth—and discovered a lot of paranoia and hypocrisy”.

The first two sentences in this bullet point are questions. Arguably, the first question asserts facts: Devin Nunes’ parents and brother covered their tracks and moved their farm to Iowa. The word “quietly” is an adjective arguably reflecting an opinion. The words “covered their tracks” could be an opinion, but implies facts, that is that the Nunes performed some act to conceal the move. The third sentence appears generally to assert an opinion: Esquire searched for the truth and discovered a lot of paranoia and hypocrisy. Whether Esquire searched for the truth seems a matter of opinion, as is whether Esquire discovered facts that led it or anyone else to conclude that there was some or a lot of something considered to be paranoia or hypocrisy. Plaintiffs’ complaint does not make it clear what it is in this bullet point they allege is false. In theory, plaintiffs could allege facts that would prove the first sentence to be false. That is, plaintiffs could allege that they did not move their farm to Iowa. Plaintiffs’ complaint does not make it clear at all which of these statements plaintiffs are alleging are false. Plaintiffs could be asserting that it is false that the Nunes concealed any move, or they could be asserting that Esquire did not discover paranoia or hypocrisy. Nor does the complaint allege facts showing that any of the statements are false or why they are false. How defendants’ answer the complaint or the defense they assert to the defamation claim turns on what it is that plaintiffs allege is false in this bullet point.

There were 15 more explanations like the one above. After that was completed, Judge Williams said the “tedious and laborious exercise of dissecting each of the sixteen bullet points illustrates the deficiency of plaintiffs’ complaint.”

It seems the judge is saying that the complaint was pleaded so poorly that the defendants were entitled to a more definite statement of facts so that they are “able to answer the complaint and assert a defense.”

The court said the plaintiffs’ complaint represents “one of the rare instances when a more definite statement is required under Rule 12(e).” The judge gave the plaintiffs 14 days (as of Tuesday, May 12) to amend their complaint to “state whether it is alleging specific facts are false, and if so, which ones and why.”

The judge will toss the case if the plaintiffs do not file that amended complaint.

You can read the order below: