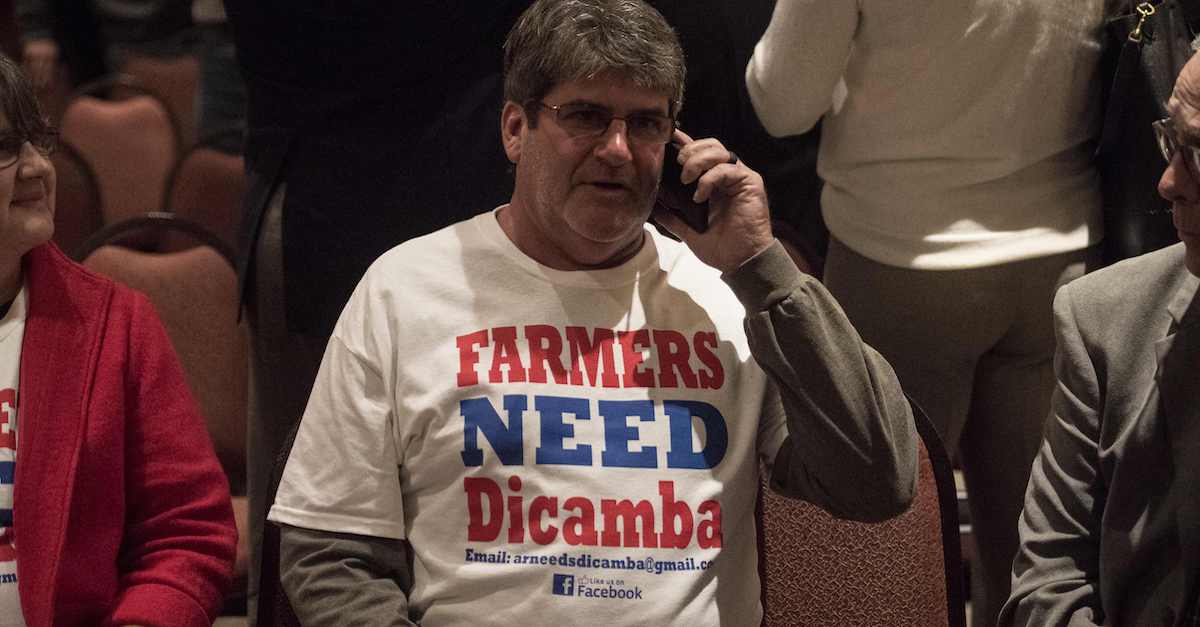 A farmer wearing a T-shirt reading “Farmers Need Dicamba” speaks on his phone during a break at a public hearing of the Arkansas Plant Board in Little Rock, Arkansas, on November 8, 2017.

More than 2,000 farmers are expected to sue Monsanto/Bayer and German chemical company BASF over the damage an herbicide known as dicamba allegedly caused to crops.

Law firm Peiffer Wolf Carr & Kane, which recently won a $265 million verdict in Missouri, announced in a Wednesday press release that the verdict was only the beginning. The firm said it currently represents dozens of farmers and has gained numerous clients since the Missouri verdict. The Missouri result, in summary:

A Missouri peach farmer notched a rare courtroom victory this month, defeating the former Monsanto Co. and chemical giant BASF in the first of what is expected to be a series of court fights over claims that the companies are responsible for pesticide damage that has wiped out orchards, gardens, and organic farm fields in multiple states.

On February 14, a unanimous jury awarded Bill Bader and his family-owned Bader Farms $15 million in compensatory damages. The following day, they added on another $250 million in punitive damages to be paid by Bayer AG (Monsanto’s German owner) and BASF. The jury found that Monsanto and BASF conspired in actions that created what Bader’s attorney called an “ecological disaster” designed to increase profits at the expense of farmers such as Bader.

Anti-pesticide activists hailed the verdict as “just the tip of the iceberg,” and Peiffer Wolf agrees.

The managing partner of the firm, Joseph Peiffer, said they have the “road map to get justice for dicamba victims.”

“The Bader verdict in Missouri sent a clear signal that you can’t profit off of hurting innocent farmers and get away with it. Monsanto/Bayer and BASF understandably want to calm down shareholders and the markets by pretending that there aren’t more than 2,000 farmers out there with dicamba damage,” he said in a statement obtained by Law&Crime. “The crop damage research and increasing farmer complaints forecast a much bigger problem than Monsanto/Bayer and BASF want to admit.”

“At some point, Monsanto/Bayer and BASF need to stop killing farmers and their livelihood,” he added.

Paul Lesko, another Peiffer Wolf attorney, said that “Since the verdict, we’ve spoken with many farmers who have suffered dicamba damage to their crops. They want to know what to do and what recourse they have.”

“The impact was very bad considering we were in our infancy of starting up our company … Our company could not sell any trees in 2018 or 2019,” Wankowski, a Missouri farmer, said. “We started with 1875 trees a year and should have had well over 3,000 trees by now. Yet at this point, we only have around 350 total trees from that time frame, and out of these there are maybe only 100 marketable trees.”

Joe McLemore of Arkansas said the damage done to his soybean fields has caused him to “live with increased anxiety” and caused “a lot of sleepless nights.”

“I don’t ever get a chance to relax, when the entire year the crop is stressed from this and there is no way of anticipating which of the fields were hit or with how much of the chemical,” he said.

Harper said dicamba caused upwards of $200,000 to his crops in North Carolina.

“We do use Monsanto/Bayer products but not dicamba technology. We have a way to keep the fields clean without using dicamba,” he said. “We can’t use it because of all the different crops on my farm and our neighbors’ farms. You want to be respectful of your neighbors.”