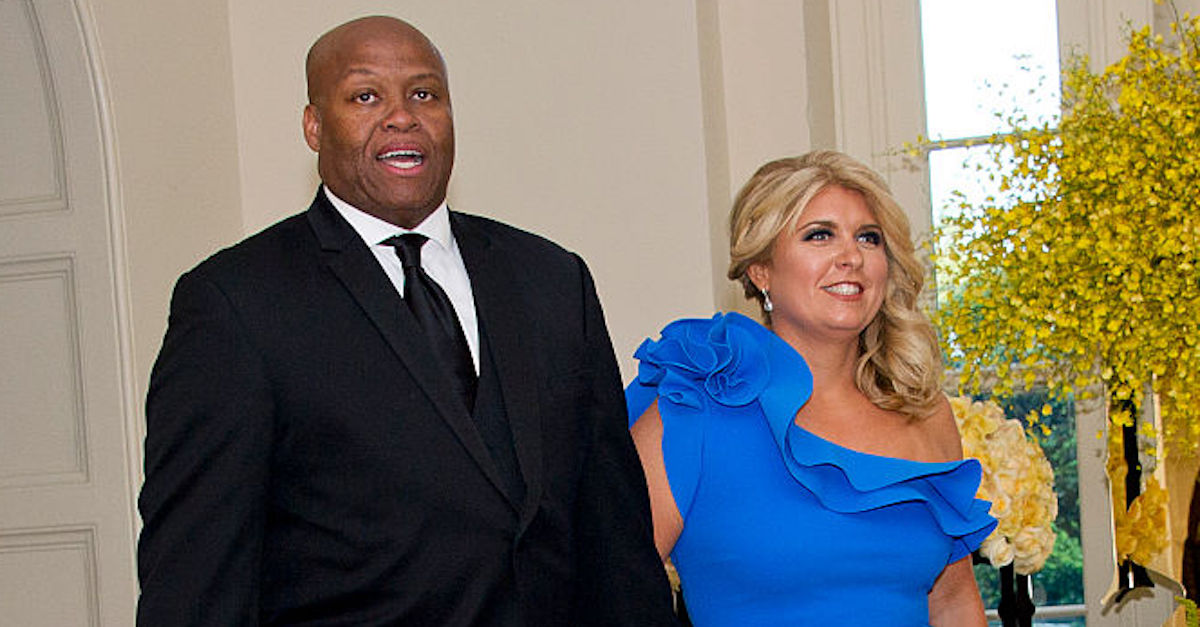 A Milwaukee private school that has been sued by Michelle Obama’s brother says that it did not retaliate against the family after complaints about the way the school treated students of color.

Craig Robinson, the former first lady’s older brother, and his wife Kelly Robinson sued the University School of Milwaukee in April. They say that the school wrongfully refused to re-enroll their sons after the parents raised concerns and complained about about how students of color were treated and represented in learning materials.

Robinson, who is Black, is the brother-in-law of Barack Obama, the first Black U.S. President.

The Robinsons’ sons were 11 and nine years old when the Robinsons learned that they would not be re-enrolled. They had started attending the school in 2016.

According to the complaint, the Robinsons raised concerns to the school in 2020 “about the inclusion of language in various worksheets and projects that was offensive to persons of color, persons with disabilities, indigenous Americans, and other underrepresented students.”

The complaint didn’t identify these concerns, but USM Head of School Steve Hancock addressed them in a statement in April.

In one worksheet, Hancock said, students were asked to find and circle various words, including the word “plantation.”

The other two worksheets had students “find classmates who had engaged in various activities during their breaks—such as ‘played sports,’ ‘watched a movie,’ and ‘visited another state,'” Hancock said in the statement.

“When concerns about the content of these worksheets were raised by the family, we took these concerns very seriously, and engaged with them to better understand their thinking,” Hancock continued. “Ultimately, we did not find the material to be of concern, and shared this directly with the family.”

The Robinsons also say that Black students and students of color at the school, which covers preschool through 12th grade, were targeted on the basis of their race while the school looked the other way.

“Over the past two years, USM was made aware of multiple white students who used racial slurs, acted in a racist manner toward students of color, or who threatened students of color based upon their race,” the complaint says. “Some students urged others to participate in the same racist behaviors, encouraging them that they could do so without fear of reprisal from USM. Many of the students who engaged in these behaviors were in fact permitted to continue their education at USM without apparent discipline or consequence.”

As an example of USM’s alleged history of indifference toward Black students, the Robinsons brought up a since-discontinued activity that purported to teach students about the Underground Railroad, the slavery-era resistance network that helped enslaved African-Americans escape from the South.

“For years, USM required fourth grade students to undergo an ‘Underground Railroad’ simulation, in which all students were told to act like ‘runaway slaves,'” the complaint says. The students were reportedly told students to wear “old clothing or purchase used clothing from thrift stores,” and during the activity, school faculty “acted as ‘slave catchers’ and were told to try to catch the students.”

“During the simulation, students were to navigate through dark hallways and classrooms, while USM staff played sounds evoking whips, chains, and horses galloping to make the experience more vivid and intense,” the complaint said, noting that the school stopped the program only after “multiple students of color, USM parents, Black alumni, and others protested the insensitivity and lack of appropriateness of the practice.”

The school stopped this program before the Robinsons’ sons were students there.

The Robinsons said that when they persisted in their complaints, the school retaliated by punishing their sons, who the complaint describes as “model, high-achieving students.”

“Rather than address the expressed concerns directly through constructive dialogue and actions, Defendant responded by inflicting extreme and unwarranted harm on two of USM’s model students of color,” the complaint says. “In so doing, USM acted unreasonably, in bad faith, and in a manner that was arbitrary and capricious and directly contrary to the tenets of fairness and inclusion adopted by USM in the Contractual Documents.”

“Defendant’s unprecedented and Draconian action to remove two minor children of color from their school at impressionable ages, was traumatizing,” the complaint adds.

USM: Robinsons Want to Win in the “Court of Public Opinion.”

In a harshly-worded motion to dismiss filed Thursday, the school accuses the Robinsons of embarking on a “media campaign intended to tarnish USM’s reputation as one of the nation’s premier independent, college-preparatory schools,” and says the couple isn’t serious about pursuing a legal remedy.

“Every cause of action the Robinsons assert is flawed as a matter of law for the reasons explained below,” the motion to dismiss says. “But that does not trouble the Robinsons because they hope to win not in the court of law, but in the court of public opinion—where legal rules, facts, and evidence matter little.”

The school denied the Robinsons’ allegations of bias, but the motion to dismiss says that even if they were true, the Robinsons’ lawsuit should be dismissed because, contractually, the school isn’t obligated to grant admission to any student.

“The contract on which the Robinsons purport to base their breach cause of action unambiguously gives USM the right to decline to reenroll the Robinson children if USM officials determine for ‘any reason that enrollment is not in the best interests of the school,'” the motion says. “USM officials undisputedly made that determinationAs a result, USM cannot have breached the contract or the implied covenant of good faith and fair dealing by exercising its express right not to reenroll the Robinson children.”

The school also said that the Robinsons’ complaint “strategically omitted” relevant facts, mostly about the interactions between the Robinsons and school staff, including teachers and administrators.

“The Robinsons fail to mention that Mrs. Robinson began regularly attending her older son’s virtual classes during the pandemic to observe and critique his teachers,” the motion says. “The Robinsons omit that she thereafter sent an incessant series of lengthy, misguided, and often disrespectful emails and text messages asserting unfounded complaints about his teachers, all of whom were working hard to meet the unprecedented challenges of dual-modality, synchronous learning. The Robinsons fail to note that USM faculty and administrators spent hours each week working with them to address their concerns and that USM committed significant resources to help the Robinsons regain a healthy relationship with the school.”

In fact, the school alleges, the Robinsons violated the agreement they made with the school, not the other way around.

“The Robinsons omit that USM repeatedly advised them that their communications with the school increasingly demonstrated a lack of respect, trust, and kindness, and therefore violated the school’s Common Trust and Parent School Partnership—core aspects of the school’s educational philosophy,” the complaint says. “And the Robinsons fail to mention that rather than accept any responsibility for their actions, they responded by threatening to engage in the campaign that has since followed, asserting baseless claims of ‘racial and socioeconomic insensitivities’ to garner national attention and shift to USM the blame for their eventual separation from its community.”

The motion to dismiss did not address the Robinsons’ specific allegations. At the time the lawsuit was filed, Hancock posted a statement to the school’s website saying that the school did hear and investigate the materials over which the Robinsons had raised concerns.

“When concerns about the content of these worksheets were raised by the family, we took these concerns very seriously, and engaged with them to better understand their thinking. Ultimately, we did not find the material to be of concern, and shared this directly with the family,” Hancock said at the time.

“Our motion makes clear that, as an absolute last resort, the family in question was not invited to return to USM due to unacceptable behavior by the parents towards our teachers and staff,” the statement said. “The family’s children were well-liked by their peers and teachers, which made this exceptionally rare decision very challenging.”

The Robinsons have set up a website called Don’t Trust USM in support of their lawsuit.

You can read the Robinsons’ complaint and the University School of Milwaukee’s motion to dismiss, below.