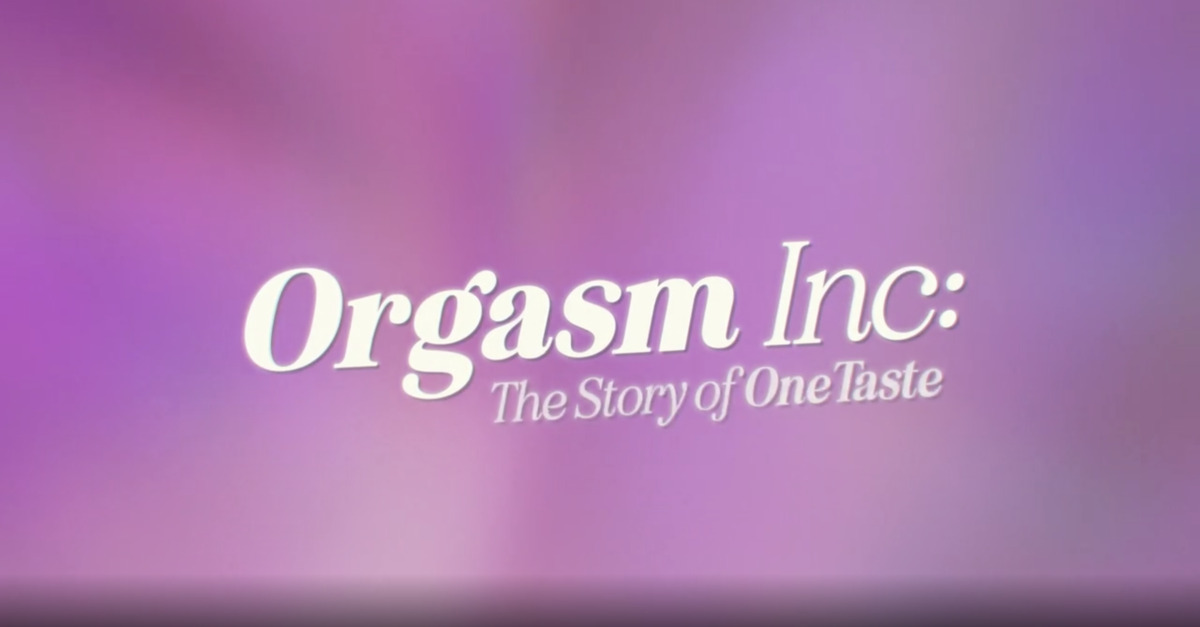 The title card for “Orgasm Inc: The Story of OneTaste”

A Netflix documentary about a sexual wellness company is facing opposition in court over sexually explicit material that was allegedly “misappropriated” and could show the faces, at least, of people who don’t want to be seen by the streaming platform’s 222 million users.

The heart of the matter has to do with OneTaste, a business that teaches adults Orgasmic Meditation, a form of sexual healing that focuses entirely on the female clitoris for an extended period of time and does not involve touching the male genitalia.

Over a period spanning 2005 through 2018, several “retreats, workshops, and classes” were conducted by OneTaste that were also “video recorded for future internal instructional purposes,” a 15-page lawsuit filed last month by 15 plaintiffs in Los Angeles County notes.

The filing seeks a temporary restraining order that would allow Netflix to release the documentary on the planned release date, Nov. 5, 2022, “but without [the Doe plaintiffs’] images, until [the Does’] rights to control images of their likeness can be adjudicated.”

That video footage, the lawsuit claims, was “unlawfully obtained” by a former employee, Chris Kosley, who was fired in 2016, then sold to filmmaker Sarah Gibson, who put together a “sizzle reel” that was shopped around to multiple production companies, including Netflix. But, the lawsuit claims, that footage was never supposed to be released or shown to anyone outside of OneTaste whatsoever.

“In 2016, OneTaste terminated Kosley’s employment,” the lawsuit states. “When Kosley departed his employment with OneTaste, Kosley misappropriated a copy of the Materials.”

The lawsuit explains at length:

Plaintiffs had, and have, a reasonable expectation that their participation in the Events would be private and confidential. The Events were closed to the public, and steps were taken to prevent disclosure of what occurred during the Events, such as closing all doors to the Event venue rooms. Prior to participating in the Events, Plaintiffs executed documents acknowledging that the Events would be confidential. Before any Event commenced, the instructor or OneTaste representative spoke to the group of students and OneTaste staff and obtained verbal agreement, and a “show of hands” from all participants agreeing that the Event was conducted in a “safe space” where intimate ideas and deep personal feelings could be discussed privately and confidentially without any fear or worry they would be publicly revealed.

“None of the Plaintiffs would have participated in any of the Events or allowed themselves to be video recorded if they knew there was any possibility that the Materials could, or would, be distributed to anyone for any purpose,” the lawsuit continues.

The plaintiffs say that isn’t enough – they don’t want their faces or any other parts of their bodies, “blurred or otherwise,” or their voices, used in the “salacious” Netflix documentary at all.

“Plaintiffs desire a declaration of their rights and duties with respect to Defendants’ rights and duties pertaining to [their] privacy rights, their interest in not appearing in the Production, currently titled ‘Orgasm, Inc.,’ advertised as a ‘true crime’ documentary,” the filing says. “Plaintiffs’ interests in controlling the use of their name or likeness, and enticing the potential viewers with the warning that the [documentary] will include sex and nudity.”

Another sticking point in the filing is how Netflix is marketing the documentary based on the allegedly purloined footage.

Titled: Orgasm Inc: The Story of OneTaste, the forthcoming program is advertised as a “true crime” production. This is being done, the lawsuit says, “for the purpose of attracting ‘eyeballs’ – i.e., public interest in true crime documentaries.” That designation, the lawsuit says, implies “those depicted in the video production are criminals.”

Netflix, in a promotional website for the documentary, appears to support their use of the “true crime” label by explaining that the company is “currently under FBI investigation for sex trafficking, prostitution and labor law infractions.” In a parenthetical, the streaming service notes that “OneTaste denies these claims.”

Paul Nicholas Boylan, the California attorney representing the Doe plaintiffs, said the mere existence of an open FBI file on allegations from several years past doesn’t mean there is necessarily criminality involved because a file can stay open indefinitely with no progress being made.

“The fact that nothing has happened after all this time is an indication that nothing happened,” Boylan told Law&Crime. “It is newsworthy that the file is open. It is irresponsible to imply that because there is a file on this and because the FBI investigated it a long time ago, that a crime is being committed.”

The attorney stressed that the “distant connection” between a possible crime doesn’t make his clients’ faces newsworthy.

“My clients are not criminals,” Boylan went on. “My clients are average and ordinary people who work their jobs, pay their taxes, and are important members of their community. They’re just like anybody else.”

In an email to Law&Crime, a spokesperson for Netflix said the company is not commenting on the litigation.

The filmmaker directly addressed some of the claims in the lawsuit.

“The footage featured in our film was all legally obtained by us and much was already public and had been distributed by OneTaste themselves, or on Youtube, or in past news reports,” Gibson said, “No one’s rights have been violated by the footage we used. When there was more sensitive footage included, we used it sparingly and took immense care and responsibility to edit and crop as to not exploit or sensationalize it.”

Editor’s note: this story has been amended post-publication to include a response from Netflix and the filmmaker.