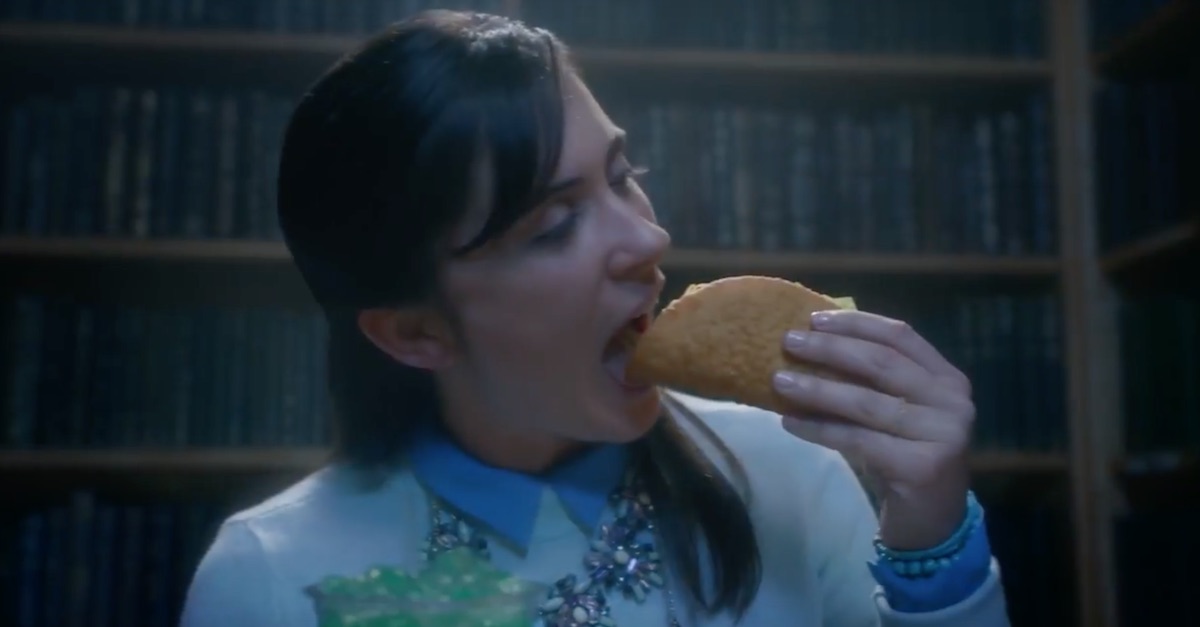 A federal judge in New Jersey dismissed a married couple’s lawsuit against Taco Bell forever on Tuesday. Nelson Estrella-Rosales and Joann Estrella tried and failed to hold the fast food restaurant accountable for selling them a $5 Chalupa Cravings Box for $5.99.

To be clear, both of them bought such boxes and both of them were charged $5.99, a fact that apparently enraged them because—they thought—it was not what they saw advertised on TV.

The commercial in question was called “The Librarian.”

There was one major problem for the plaintiffs: they failed to read the fine print.

Never have the words “At participating locations for a limited time,” “Prices may vary,” and “Tax extra” been so devastating.

The plaintiffs claimed that the advertisement convinced them that a $5 box of food was what they needed; they were shocked and appalled when that didn’t turn out to be the price, and believed that the New Jersey Consumer Fraud Act had been violated:

Plaintiffs allege that, after ordering two “Chalupa Cravings Boxes,” they were provided with a receipt charging them $12.18 before tax. That receipt indicated that the Green Brook Restaurant charged $5.99 for the Chalupa Cravings Box. Def.’s Mot. Ex. C. The receipt also indicated that Plaintiffs chose to pay $0.20 extra for a soft taco substitution ($0.10 for each box). Id. Plaintiffs were charged a total of $12.99, inclusive of $0.81 of New Jersey sales taxes. Plaintiffs allege that, after they were handed the receipt. they “questioned the restaurant’s management why they were charged $12.18 for two $5.00 Cravings Boxes.” They allege the manager informed them that individual Taco Bell restaurants, such as the Green Brook Restaurant, operate as franchises that can set their own prices.

According to U.S. District Judge William J. Martini, however, there was no case here. The commercial said in the fine print that prices might vary by location and the prices did vary at this location.

“In sum, Plaintiffs were on notice of the $5.99 price of a Chalupa Cravings Box at the Green Brook Restaurant, yet decided to make the purchase anyway, including the $0.20 substitution for two soft-shell tacos,” the judge wrote. “Plaintiffs did not reasonably rely on any misleading inference they claim could be drawn from the ‘Librarian’ ad, and they could not have been injured by any of the accurate information conveyed in that ad, which did not contradict any information Plaintiffs received at the Green Brook Restaurant.”

The judge ruled that the plaintiffs failed to state a claim and dismissed their complaint with prejudice, meaning the case cannot be filed again.

Taco Bell lawsuit in NJ dismissed by Law&Crime on Scribd