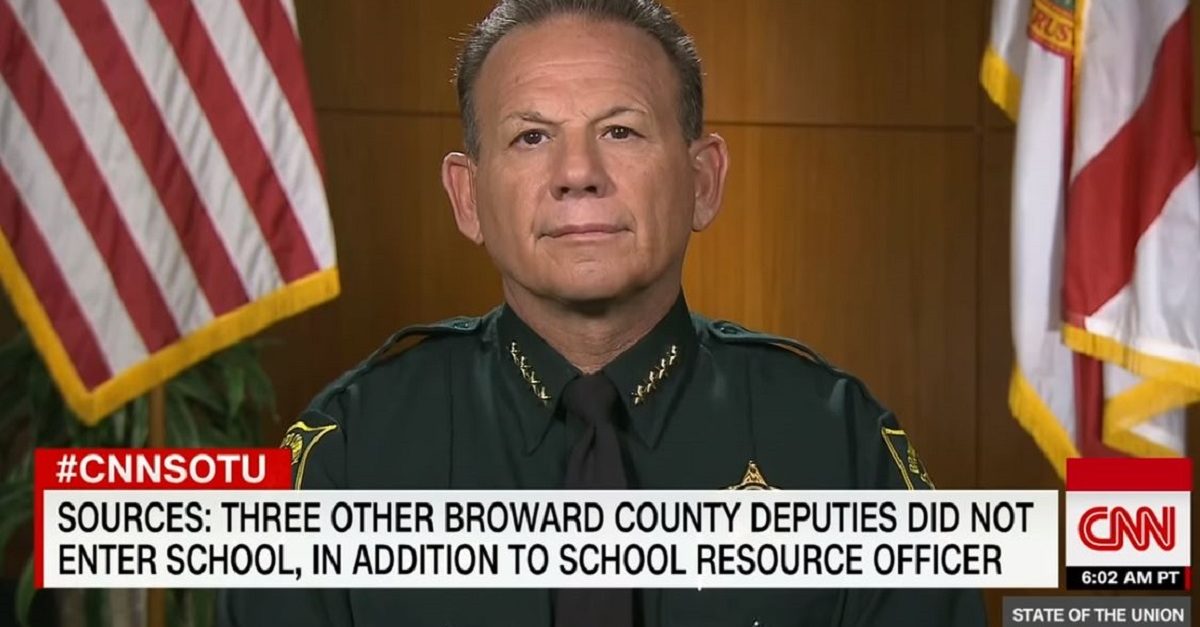 The formerly elected Democratic sheriff of Broward County who was ousted last year, Florida state officials said, due to “neglect of duty and incompetence” in handling two mass shootings is trying to move his federal lawsuit forward. Scott Israel claims that Florida Gov. Ron DeSantis (R) and Florida Senate President Bill Galvano (R) violated the Constitution in order to remove him from office.

While DeSantis and Galvano have asked a U.S. District judge in the Northern District of Florida, Tallahassee Division, to dismiss the lawsuit, Israel has made his case that the suit should move forward as he attempts to run for sheriff against Gregory Tony–the guy DeSantis appointed to replace Israel.

In a Monday motion in opposition to dismissal (h/t Local 10), Israel said that the decision to remove him for his handling of the Fort Lauderdale-Hollywood International Airport shooting of Jan. 2017 and the Marjory Stoneman Douglas High School shooting of Feb. 2018 was mere “whim and caprice, without a substantial evidentiary basis.” He says the ouster violated his constitutional right to due process. Per the motion:

So, too, the Florida Senate, in determining whether to remove a suspended constitutional officer, has never relied solely on partisan political power in the absence of proven facts or a fair opportunity for the suspended official to be informed of the information on which the Senate’s suspension depended.

Yet, Sheriff Israel, although elected by the voters of Broward County, Florida, has been removed from office without any factual showing of cause and without having had an opportunity to know the information on which the Senate relied and in the absence of any fair hearing at which Sheriff Israel was able to respond to the accusations against him. The resulting process of suspension and removal offends constitutional notions of due process and substantive and procedural fairness, the result of which is the suspension and removal of an elected official by the partisan decisions of the Governor and Florida Senate.

Israel claims that he was removed based on “suspicion” and “innuendo,” rather than a factual and evidentiary standard. Even if the removal complied with state law (Israel claims it didn’t), constitutional rights were still trampled on (Israel asserted):

The State of Florida deprived Sheriff Israel of his elected position for more than one year as of the present time, and in the process has done so without affording him a fair and reasonable opportunity to contest the “evidence’ on which his suspension and removal was based. When he was given an opportunity to do so during the trial before the assigned Special Master, Sheriff Israel succeeded in countermanding all evidence upon which the Governor relied upon for the suspension. But when the Governor opposed the Special Master’s ruling, the Florida Senate relied on suspicion, innuendo, and unnoticed speculation to declare that Sheriff Israel must be removed from office. The resulting removal, now challenged by Sheriff Israel, offends notions of due process and fundamental fairness.

Even though the Governor contends the Sheriff’s suspension and removal complied with Florida law (it did not) (DE24, p. 5-8, 9-16), the process used in this instance does not excuse a violation of the U.S. Constitution. See, e.g., Brown v. Bd. of Educ., 347 U.S. 483 (1954) (compliance with state law that nonetheless violates constitutional principles is not immune from federal oversight).

“I have no trouble concluding these deputies neglected their duty during the Stoneman Douglas shooting and bear varying degrees of culpability,” Dudley Goodlette concluded, in part. “However, I cannot adopt the governor’s position that their personal failures, in and of themselves, create grounds to remove Sheriff Israel.”

“My finding here is simply that the governor did not meet his burden of proving that Sheriff Israel neglected his duties or was incompetent,” he added.

Opposition to Governor’… by PeterBurke on Scribd