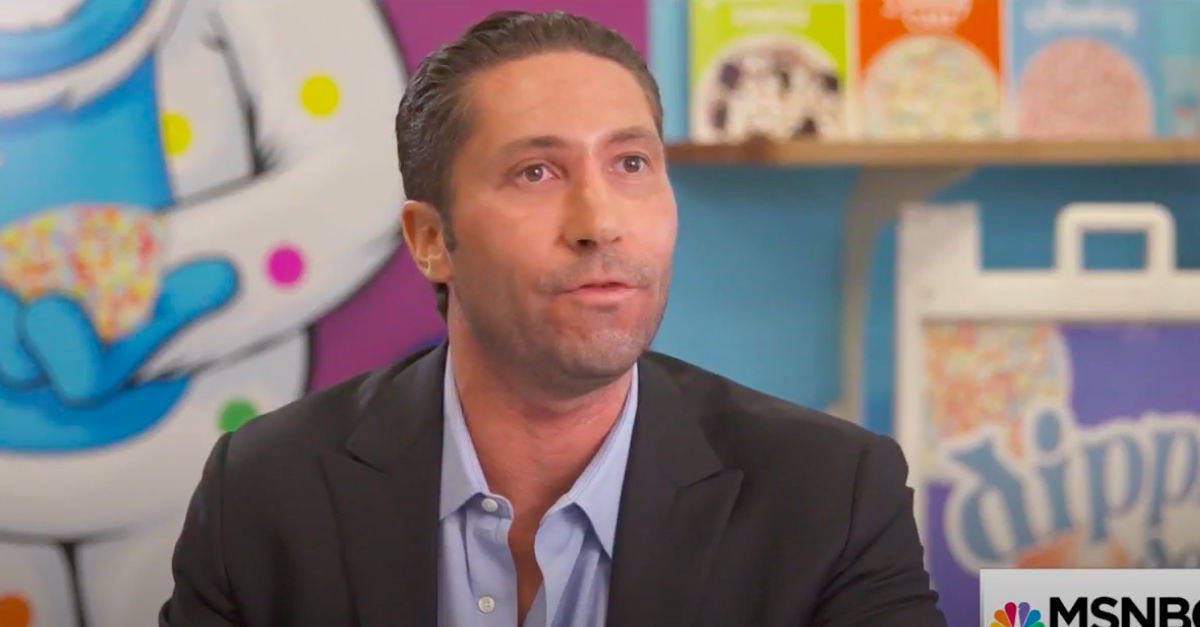 The ex-girlfriend of Dippin’ Dots CEO Scott Fischer is suing her former beau, accusing him of spearheading an elaborate effort to humiliate and blackmail her by sending nude photos of her — some of which were allegedly taken without consent — to multiple people, including her own mother. Fischer’s lawyers reportedly responded to the allegations by claiming that Amanda Brown is an “outlandish” example of attempted extortion.

The 14-page lawsuit, filed earlier this month in Oklahoma state district court, says that following his toxic two-year relationship with Amanda Brown, the dessert mogul began a “relentless and vicious campaign of harassment and retaliation targeting Amanda, culminating in his non-consensual dissemination of her private sexual images to third parties.”

“On at least one recent occasion, Fischer delivered Amanda’s private sexual image to perhaps the most traumatizing audience imaginable—Amanda’s mother,” the suit states.

The causes of action are based on claims of invasion of privacy, intentional infliction of emotional distress, and negligence in the handling of Brown’s nude photographs and videos.

Brown said that Fischer consistently abused alcohol during their relationship despite her “frequently” pleading with him to stop engaging in the self-destructive lifestyle that she says led to the end of their relationship.

According to the lawsuit, Fischer did not simply send the intimate photos of Brown to others, he also repeatedly suggested that he was “too rich or powerful for her to hold him accountable,” and promised her that “the law cannot reach him.” Brown further alleged that Fischer used the sexual images of her as part of a blackmail scheme.

Under Oklahoma state law, intentionally disseminating private sexual images with the intent to “harass, intimidate or coerce” another is a crime punishable by up to one-year in prison and a fine of up to $1,000 dollars.

The complaint also contained alleged excerpts of text messages Fischer sent to Brown. For example, on Dec. 3, 2019, Fischer allegedly wrote: “I’m sending this and the [REDACTED] video to [Person A] to hold on to for us potentially fighting.”

Brown responded by telling Fischer “You do and I will forever hate u,” and saying that their relationship was “done.”

Earlier this year, Fischer allegedly wrote, “Fuck you, you are not a good person. I just sent you the pics by text that I’m about to send out. You will see what my revenge will do.”

Later that day Fischer allegedly sent a follow up text reading: “I just sent your nudes out to everyone […] watch what I do to you. I’m going to make sure any sex pics, bad pics are sent to your employer, they will be soon sent to our friends, then I’ll sue you for [the dog] … do you want to see what war is like … I’m about to show you.”

Alleging that Fischer engaged in similarly abusive behavior in two previous relationships, Brown said that she was filing the lawsuit to prevent him from engaging in such conduct in the future.

“Aware that predatory behavior persists when unconfronted, Amanda brings this action for compensatory and punitive damages in order to vindicate her own rights and, hopefully, deter Fischer—and those similarly inclined—from treating others the way Fischer treated her,” the suit states.

Dippin’ Dots did not immediately respond to an inquiry from Law&Crime. TMZ, however, reported that Fischer’s lawyers released a statement, calling Brown’s lawsuit an attempt to extort their CEO client after he ended the relationship.

“This inflammatory lawsuit brought forth by Ms. Brown is nothing more than an attempt to extort Mr. Fischer after he ended their relationship. It is unfortunate that she has stooped to the level of attacking my client through an outlandish lawsuit, covering up her illegal actions,” the statement said. “Mr. Fischer is disappointed this has become a legal matter despite his efforts to bring about a respectful resolution. He is ready to put the matter behind him and move forward.”