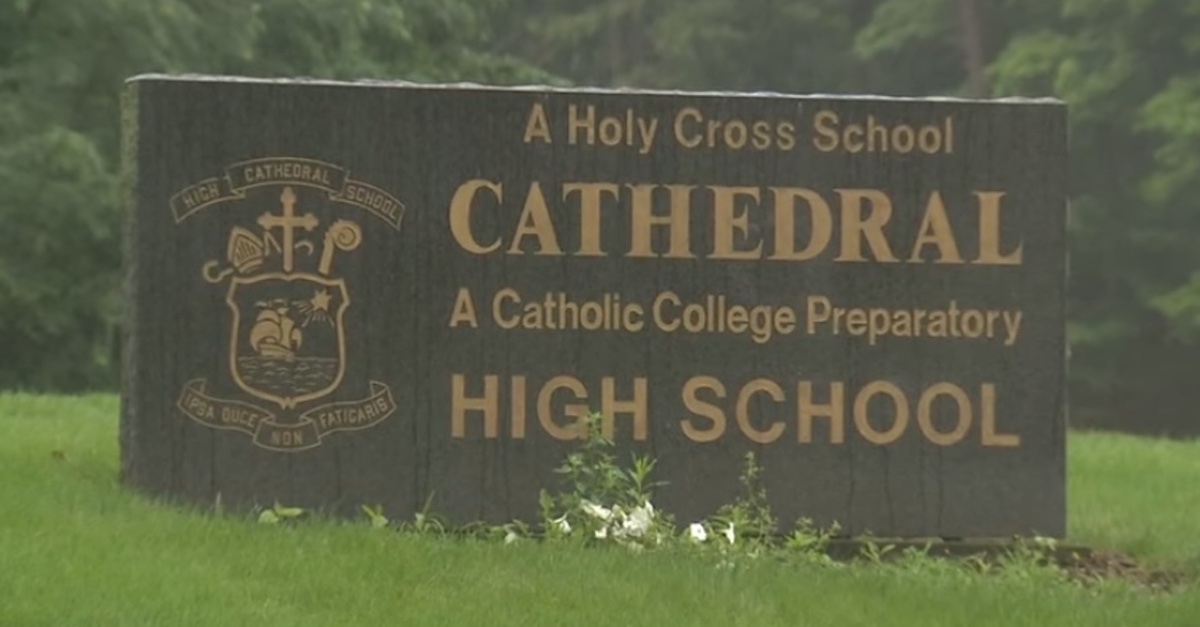 The Indiana Supreme Court has sided with the Catholic authority in Indianapolis in a lawsuit over the decision to fire a longtime teacher because of he is married to a man.

Joshua Payne-Elliott, who was a world language and social studies teacher at Cathedral High School from 2006 to 2019, was fired at the direction of the Archdiocese of Indianapolis. Payne-Elliott lost his job in June of 2019 following a directive from the archdiocese that Catholic schools could not employ people who were in same-sex marriages.

“Religious freedom protected by the First Amendment to the United States Constitution encompasses the right of religious institutions ‘to decide for themselves, free from state interference, matters of church government as well as those of faith and doctrine,'” the ruling, issued Wednesday, said (citations omitted). “This principle, known as the church-autonomy doctrine, applies in this case and requires its dismissal[.]”

Payne-Elliott had married his husband, Layton Payne-Elliott, a teacher at Brebeuf Jesuit Preparatory School, in 2017. Cathedral, aware of the relationship, renewed Joshua Payne-Elliott’s contract through May 2019 to include the 2019-2020 school year.

The archdiocese, meanwhile, had ordered both Cathedral and Brebeuf, also in Indianapolis, to fire both men “due to the teacher being a spouse within a civilly-recognized same-sex marriage.” Brebeuf refused, resulting in the Archbishop Charles C. Thompson issuing a decree that the school was no longer recognized as a Catholic institution.

Cathedral, however, did fire Payne-Ellott, citing the archdiocese’s directive.

“Archbishop Thompson made it clear that Cathedral’s continued employment of a teacher in a public, same-sex marriage would result in our forfeiting our Catholic identity due to our employment of an individual living in contradiction to Catholic teaching on marriage,” Cathedral said in a letter posted to its website on June 23, 2019. “Cathedral has been a Catholic school for the past 100 years and our Catholic faith is at the core of who we are and what we teach at Cathedral … to remain a Catholic Holy Cross School, Cathedral must follow the direct guidance given to us by Archbishop Thompson and separate from the teacher.”

Payne-Elliott accused the archdiocese of interfering with his contract and employment relationship with the school. The archdiocese argued that the church-autonomy doctrine allowed it to fire Payne-Elliott based on his same-sex marriage — and the Indiana Supreme Court agreed.

In Indiana, the justices said, the church-autonomy doctrine can be invoked if four elements are met.

“[U]nder the church-autonomy doctrine a civil court may not (1) penalize via tort law (2) a communication or coordination among church officials or members (3) on a matter of internal church policy or administration that (4) does not culminate in a criminal act,” the ruling says.

Payne-Elliott’s complaint, the ruling says, met all these elements: employment interference is a tort claim, the lawsuit focused on communications between the school and the archdiocese, and those communications were about “whether a school maintains its Catholic identity,” which the justices says is an “internal matter that concerns both church policy and administration.”

The justices also noted that Payne-Elliott’s complaint didn’t allege that the archdiocese’s alleged tortious conduct ended in a criminal act.

In its motion to dismiss, the archdiocese had also argued that First Amendment freedom of association protections and the ministerial exception allowed for Payne-Elliott’s firing, but the Supreme Court didn’t reach either of those arguments, having found that the church-autonomy doctrine applied.

A Marion County Superior Court judge had dismissed Payne-Elliott’s lawsuit in May of 2021, largely on procedural grounds. An appellate court reversed that ruling in November and reinstated the lawsuit. The archdiocese then brought the case to the state’s highest court.

Lawyers for the Archdiocese celebrated the decision, calling it a win for religious freedom.

“Courts can’t decide what it means to be Catholic—only the Church can do that,” said Luke Goodrich, the vice president and senior counsel at the Becket Fund for Religious Liberty, in a press release posted to the organization’s website. “By keeping the judiciary out of religious identity, the Indiana Supreme Court just protected all religious institutions to be free from government interference in deciding their core religious values.”

Representatives for Payne-Elliott said they are considering next steps on behalf of their client, and noted that the state Supreme Court didn’t preclude Payne-Elliot from pursuing his claim on other grounds.

“We lament this decision’s movement towards immunity from civil liability for religious institutions that discriminate against their employees,” attorney Kathleen DeLaney said in a statement emailed to the Indianapolis Star. “The Court did, however, expressly allow Mr. Payne-Elliott to file a new complaint and start the case anew.”

Indeed, while affirming the dismissal of the case, the Indiana justices modified the lower court judgment to allow for Payne-Elliott to amend his complaint and “to reflect the dismissal is without prejudice.”

Payne-Elliott reportedly said in the statement that he still believes the Archdiocese forced Cathedral into breaking his employment agreement.

“While we are disappointed by today’s decision,” Payne-Elliott said, according to the Indianapolis Star, “[w]e would like to make clear that the Archdiocese of Indianapolis ordered the school to breach my valid, legal employment contract – a contract that the school had renewed three times after the school was aware of the relationship.”