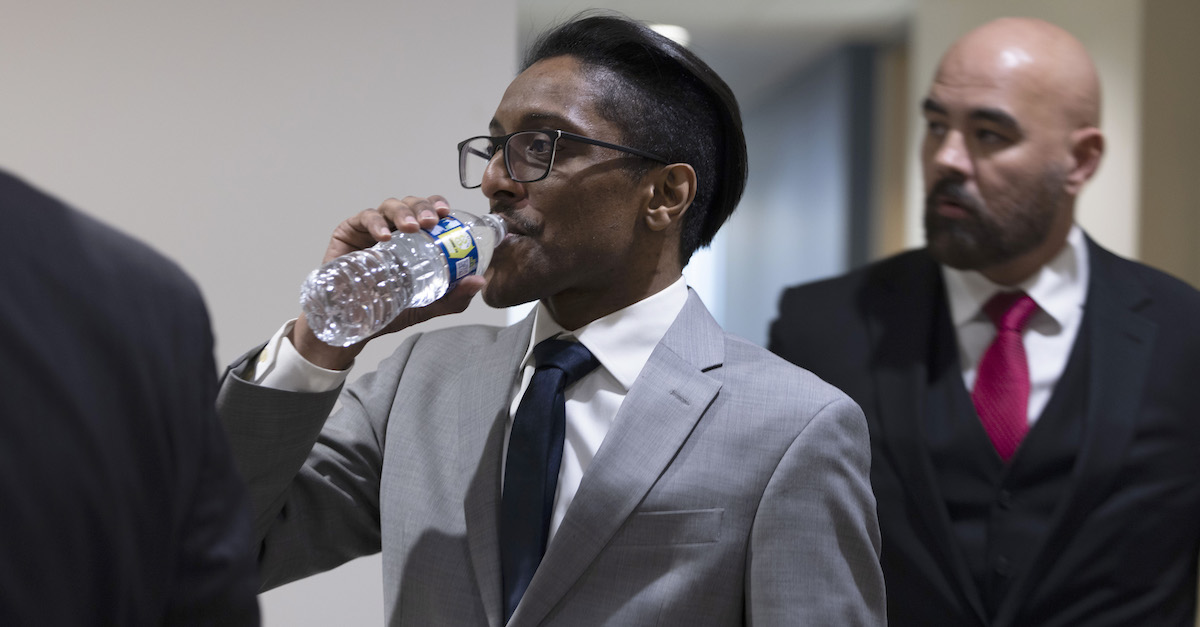 WASHINGTON, D.C. – DEC. 9: Stop the Steal organizer Ali Alexander takes a sip of water as he returns to a conference room for a deposition meeting on Capitol Hill with the House select committee investigating the January 6th attack on Dec. 9, 2021 in Washington, D.C.

“Stop the Steal” leader Ali Alexander, who helped organize rallies before the Jan. 6 attack on the U.S. Capitol, appeared before a federal grand jury on Friday.

Alexander’s attorney Paul Kamenar provided a lengthy statement regarding his cooperation with the Justice Department and the Jan. 6 Committee, but it kept mum about the secret grand jury proceedings.

“Out of respect for the grand jury process, I will not comment further on my testimony at this time,” the statement concludes.

A far-right activist and convicted felon, Alexander came under scrutiny from the Jan. 6 Committee after telling his followers on Periscope that he had planned to put “maximum pressure on Congress” with help from three Republican lawmakers: Reps. Andy Biggs of Arizona, Mo Brooks of Alabama, and Paul Gosar of Arizona. All three of those lawmakers allegedly requested pardons from former President Donald Trump.

The committee subpoenaed Alexander this past October and reportedly cooperated with that investigation, handing lawmakers thousands of documents and testifying behind closed doors. According to Alexander’s statement, he testified for eight hours and “supplied them with hundreds of requested documents” regarding his involvement with the rallies on Jan. 5 and 6 in Washington, D.C.

“In a statement I released then, I stated that I did not plan or participate in any illegal activity, and in fact, pleaded with protestors not to enter the Capitol but to attend my permitted rally near the U.S. Capitol,” he wrote. “Unfortunately, that rally did not take place due to the disruption.”

Alexander claims that the Justice Department sought essentially the same documents he provided the committee.

“I was assured that I was not a target but a fact witness,” he claimed.

Police officers who were assaulted during the Jan. 6 siege sued Alexander and others in August 2021.

According to the liberal research center Media Matters, Alexander boasted about a phone call with “people from the White House” weeks before the attack on the Capitol. The Jan. 6 Committee cited this report in describing Alexander’s alleged support for the “possible use of violence” and claimed “communication with the White House and Members of Congress regarding events planned to coincide with the certification of the 2020 Electoral College results.”

The activities of the so-called “Stop the Steal” movement are said to have extended beyond simply organizing demonstrations.

In addition to Alexander, the committee also scrutinized Nathan Martin, a city councilman in Shelby, Ohio whose name also appeared on the rally permit; and Stop the Steal, LLC, the organization affiliated with the event.

“The rally on the Capitol grounds on January 6th, like the rally near the White House that day, immediately preceded the violent attack on the seat of our democracy,” the Committee’s Chair Bennie Thompson (D-Miss.) wrote late last year. “Over the course of that day, demonstrations escalated to violence and protestors became rioters. The Select Committee needs to understand all the details about the events that came before the attack, including who was involved in planning and funding them. We expect these witnesses to cooperate fully with our probe.”

Alexander said the committee “balked” at sharing transcripts of his testimony with the Justice Department, but he added that he is opposing the committee’s subpoena of his phone records.

“I am challenging in court the Select Committee’s unlawful subpoena to Verizon to fish through my phone records and those of one of my volunteers whose only ‘crime’ was to exercise her First Amendment rights to pass out a few signs at the rallies, sing patriotic songs, and pray,” he claimed. “In a letter to Chairman Bennie Thompson, The Project On Government Oversight said these subpoenas for the phone records of law-abiding citizens is a dangerous abuse of power.”

Update—June 24 at 5:41 p.m. Eastern Time: This story has been updated to include Alexander’s statement, provided through his attorney.