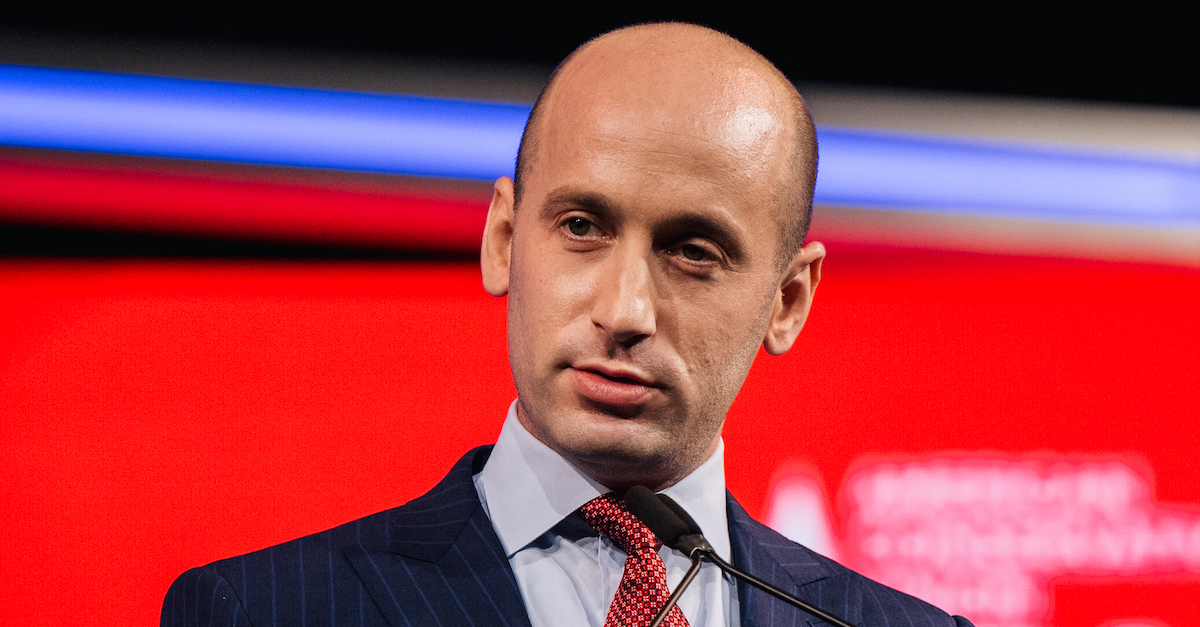 Former White House Senior Adviser Stephen Miller on Wednesday filed a federal lawsuit against the U.S. House Select Committee to Investigate the January 6th Attack on the U.S. Capitol. The lawsuit is one of several which have sought to block subpoenas issued by the Committee for cellular telephone providers. One slightly similar case was launched by longtime GOP operative Roger Stone.

Miller and a partnership named Plaintiff Carron Drive Apartments LP are the plaintiffs. The Jan. 6 Committee and its chairman, Rep. Bennie G. Thompson (D-Miss.) are the named defendants. According to the lawsuit itself, the partnership’s inclusion as a plaintiff in the case is apparently because it has been used by Miller’s parents to pay the former presidential adviser’s cell phone bills “for at least the last ten years.” Specifically:

Plaintiff Carron Drive Apartments LP (“Carron Drive”) is a California Limited Partnership formed in August 1997. Carron Drive is the subscriber for a T-Mobile “family plan” phone account that is used by Michael D. Miller, Miriam G. Miller and their children, including Plaintiff Stephen Miller (“Family Plan Account”). Several of the Family Account Plan members are practicing attorneys who use their phones for privileged call and text communications with clients and to otherwise conduct their law practices.

According to the lawsuit, the relevant cell phone provider — T-Mobile — told Carron Drive in a letter dated Feb. 28 that it would comply with a Jan. 6 Committee subpoena for data from the family’s cell phone plan. The requested data concerned dates spanning from Nov. 1, 2020 to Jan. 31, 2021, the lawsuit says. The data more precisely was described by the lawsuit as follows:

Subscriber Information: All subscriber information for the Phone Number, including:

d.  Length of service (including start date) and types of service utilized;

f.  Activation date and termination date of each device associated with the account;

g.  Any and all number and/or account number changes prior to and after the account was activated;

Connection Records and Records of Session Times and Durations: All call, message (SMS & MMS), Internet Protocol (“IP”), and data-connection detail records associated with Phone Numbers, including all phone numbers, IP addresses, or devices that communication with the Phone Number via delivered and undelivered inbound, outbound, and routed calls, messages, voicemail, and data connections.

“T-Mobile’s letter to Carron Drive states that it intends to comply with the Subpoena and produce records to the Select Committee on March 11, 2022, unless it is provided with documentation no later than March 9, 2022, confirming that Carron Drive has filed a motion to quash or other judicial process seeking to block compliance with the Subpoena,” the lawsuit continues. The Wednesday filing — made on March 9 — is an effort to block that production of documents to the Committee by the deadline named.

The plaintiffs are seeking to avoid the subpoena on several grounds. First, Carron Drive says it “is a real estate company based in California that had no relationship whatsoever with the events of January 6th or any other matter that is within the scope of” the Committee’s work. Second, though Miller used the phone for “personal and business communications” during the relevant time frame, he also used it to consult with doctors “regarding the serious medical complications that his wife and baby daughter experienced before and after his daughter was born on November 19, 2020,” the lawsuit says. “These medical consultations involved sensitive, private matters that are entirely irrelevant to the work of the Select Committee,” the lawsuit goes on to say.

The document then rails against “the Select Committee’s intrusive and unjustified attempt to violate the privacy rights that Mr. Miller and, potentially, the other members of the Miller family” should enjoy, according to the lawsuit itself.

It then accuses the Committee of “lack[ing] the authority” to obtain the desired records.

“The Subpoena is overly broad and seeks information that is unrelated to the purposes whereby Congress established the Select Committee as set forth in H. Res. 503,” the document goes on to allege. “Moreover, the Subpoena violates Mr. Miller’s protections under the First and Fourth Amendments to the United States Constitution, as well as federal law.”

Elsewhere, the plaintiffs say they “do not dispute the legitimacy of the Select Committee’s investigation into the facts and circumstances surrounding the events at the United States Capitol on January 6.”  That is a move separate and distinct from some of the similarly situated cases — notably Stone’s, according to some reports.

Rather, Miller seeks to differentiate his claim from a previously decided case — Trump v. Thompson in the U.S. Court of Appeals for the D.C. Circuit — which held that Trump could not validly assert executive privilege over materials requested by the Jan. 6 Committee. (The U.S. Supreme Court left that ruling intact when challenged but noted the limits of its scope.) The difference, the plaintiffs say, is that the Committee subpoena for Miller’s records is not “related to, and in furtherance of, a legitimate task of the Congress” and therefore “should be quashed.”

“Mr. Miller was engaged in constitutionally protected activity, as well as sensitive, personal communications with medical professionals concerning the health and well-being of his wife and new-born daughter,” the lawsuit continues. “The Select Committee cannot demonstrate that the records it is seeking from T-Mobile would further its legislative mission, nor can it show that Mr. Miller’s personal and business communications for more than two months prior to January 6, 2021, and nearly a month after that date, are relevant to its authorized purpose.”

That is an assertion that the Committee is gobbling up large swaths of data via an overbroad investigation.

The lawsuit then raises the constitutionally protected rights to speech and association:

By seeking information about Mr. Miller’s personal and professional communications, Chairman Thompson and the Committee are improperly attempting to obtain information about Mr. Miller’s free speech and association activities that are protected by the First Amendment to the U.S. Constitution. Worse, the Chairman and the Select Committee are misusing their authority to investigate political adversaries, painting their opposition with a broad brush as insurrectionists and domestic terrorists. The Select Committee cannot demonstrate a compelling justification that would justify this intrusion.

Elsewhere, Miller, et al. say that Miller’s “cellular telephone and text message ‘call-detail’ records are the modern-day equivalent of a membership list” that may divulge “personal communications” and may also “provide records of calls and messaging with other senior Trump campaign officials.”

The document also argues Miller did nothing wrong: “there are no facts that show that Mr. Miller had any role in what happened there or otherwise engaged in any unlawful efforts to interfere with the peaceful transfer of power to the Biden administration.”

To conclude, the document alleges the subpoena violates the Fourth Amendment and other federal laws, including the Stored Communications Act.

The lawsuit seeks a bevy of declaratory judgments in favor of the plaintiffs and against the defendants. It also seeks an order which quashes the subpoena and bans its enforcement, an injunction which would prohibit the defendants from imposing sanctions for noncompliance, and the recompense of costs and fees.

Read the full paperwork below: