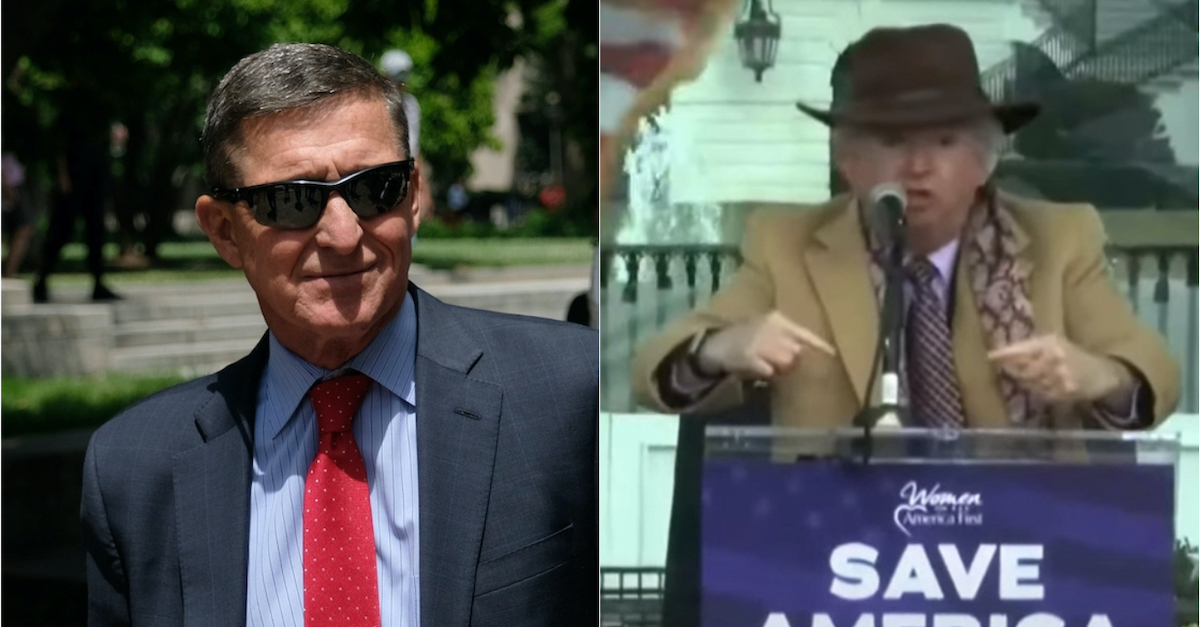 The Select Committee to Investigate the Jan. 6 Attack on the U.S. Capitol papered Donald Trump’s so-called “war room” with subpoenas on Monday, in order to find out more about the machinations of the former president’s allies inside a Washington, D.C. hotel on the days surrounding the riot.

Two of the most high-profile recipients of the subpoenas are John Eastman, the author of the so-called “coup memo,” and retired Lt. Gen. Michael Flynn, the ex-National Security Advisor who was prosecuted during the Russia investigation and subsequently pardoned by Trump.

“The Select Committee’s investigation and public reports have revealed credible evidence that you know about, and may have participated in, attempts to encourage the Vice President of the United States to reject the electors from several states or, at the very least, to delay the electoral college results to give states more time to submit different slates of electors,” the letter to Eastman states. “In fact, you reportedly wrote two memoranda offering several scenarios for the Vice President to potentially change the outcome of the 2020 Presidential election.”

“The day before, you did an interview on Newsmax TV during which you talked about seizing voting machines, foreign influence in the election, and the purported precedent for deploying military troops and declaring martial law to ‘rerun’ the election,” the letter to Flynn states.

“In the days before the January 6th attack, the former President’s closest allies and advisors drove a campaign of misinformation about the election and planned ways to stop the count of Electoral College votes,” Thompson wrote in a statement. “The Select Committee needs to know every detail about their efforts to overturn the election, including who they were talking to in the White House and in Congress, what connections they had with rallies that escalated into a riot, and who paid for it all. The Select Committee expects all witnesses to cooperate with our investigation as we work to get answers for the American people, recommend changes to our laws that will strengthen our democracy, and help ensure nothing like January 6th ever happens again.”

Like Steve Bannon—whom the Jan. 6 Committee referred to the Justice Department for contempt of Congress—the recipients of the committee’s latest subpoenas are said to have convened at the luxury Willard Intercontinental Hotel at 1401 Pennsylvania Avenue, a block away from the White House, which reportedly served as a pro-Trump “command center.” Some, but not all, were prominently featured in a Washington Post article picking apart what happened inside that building.

Citing Bob Woodward and Robert Costa’s book “Peril,” the committee noted in Bannon’s contempt referral: “It has been reported that the participants in the meetings at the Willard Hotel discussed plans to stop or delay the January 6th counting of the election results and persuade Members of Congress to block the electoral count.”

Self-described dirty trickster and Trump clemency recipient Roger Stone, who was seen leaving the hotel with Oath Keepers bodyguards, and post-election conspiracy theorist Russell Ramsland, Jr. were also said by the committee to have gone to the hotel.

(Image of Eastman via YouTube screengrab; photo of Flynn via Alex Wroblewski/Getty Images)