Trump Lawyer: The ‘Calvary Is Coming’ Tweet Referred to a ‘Public Display of Christ’s Crucifixion,’ Not a ‘Cavalry’ 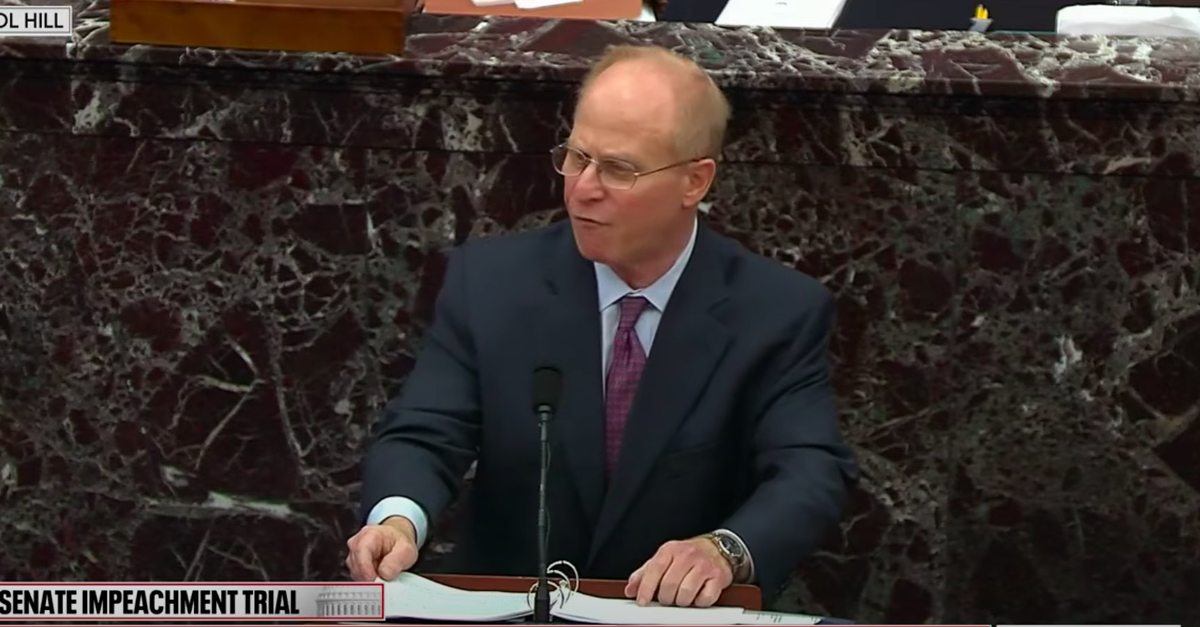 One of the attorneys representing Donald Trump in his second impeachment trial on Friday attacked House managers for supposedly creating “false representations” of the former president’s words, accusing Democrats of manipulating evidence in eyebrow-raising fashion.

Attorney David Schoen cited to a tweet that then-President Trump re-tweeted in advance of the Jan. 6 “Stop the Steal” rally that preceded the Capitol riot. House managers showed the tweet in an attempt to bolster their claim that Trump’s rhetoric incited his supporters to violence. The original tweet, posted by mega-Trump supporter Jennifer Lynn Lawrence, which also tagged “Stop the Steal” organizer Kylie Jane Kremer, read: “It has been an honor to stand up and fight for you and our nation. We will be standing strong on Jan 6th in DC with you! We are bringing the Calvary Mr. President.”

While House managers used the tweet to reflect the militarized language being used by Trump and his supporters, they did so under the presumption that Lawrence meant to write “cavalry,” not “Calvary,” an extremely common typographical error made a few times by the aforementioned Kremer.

Notably, the above tweet @s Brandon Straka, who faces charges in the Capitol riots.

The term “cavalry” refers to a group of soldiers that are easily mobile, typically on horseback (see: cavalier), while “Calvary” refers either to the place where Jesus was crucified (when capitalized) or an open air representation of the Crucifixion.

But according to Schoen, both Lawrence and Trump intentionally meant to use the latter word and definition.

“He expressly led you to believe that President Trump’s supporters believe that the president wanted armed supporters at the Jan. 6 speech, paramilitary groups, the cavalry ready for physical combat,” Schoen said. “The problem is, the actual text is exactly the opposite. The tweeter promised to bring the Calvary, public display of Christ’s crucifixion, a central symbol of our Christian faith with her to the president’s speech, a symbol of faith, love and peace. They just never want to see to read the text and believe what the text means.”

Lawrence on Thursday claimed to John Solomon that she was in fact referring to a supposed prayer vigil she planned to host while in Washington:

Lawrence, a Christian conservative activist and former Breitbart writer, said her tweet on Jan. 3 carefully chose the religious word “Calvary” — which means a public display of Christ’s crucifixion — as a reference to a prayer vigil they were hosting in Washington, and Swalwell distorted it to convey she was organizing a military cavalry, which is spelled differently and means a military brigade on horses.

“That’s exactly what I meant,” Lawrence told Just the News. “I did not mean we were bringing the cavalry. I wasn’t going to hop on horseback and come riding into D.C. with my horses and my cavalry. … And you know what we did on January 5? We held a prayer event at Freedom Plaza, and we prayed, and we brought Jesus Christ back into Washington, D.C.”

Trump allies quickly boosted this as proof that Trump was being unfairly maligned.

“"we are bringing the Calvary" was a clear reference to a prayer vigil organized by churchgoers supporting Trump and not a call for military-like violence at the Capitol riot as portrayed by Rep. Eric Swalwell.” https://t.co/Lk85nS9FRN

But most others weren’t so easily convinced.

“What would it mean for Twitter users to say they’re ‘bringing the Calvary’? Calvary, or Golgotha, was the hill on which Jesus was crucified. It makes no sense (unless they’re implying crucifixion of their opponents). No Christian I’ve ever met says, ‘We’re bringing the Calvary,’” he wrote.

What would it mean for Twitter users to say they're "bringing the Calvary"? Calvary, or Golgotha, was the hill on which Jesus was crucified. It makes no sense (unless they're implying crucifixion of their opponents). No Christian I've ever met says, "We're bringing the Calvary." https://t.co/jFKkJPvaEu

Conservative attorney Ed Whelan, who you may remember from the Brett Kavanaugh confirmation hearings, similarly said he hasn’t heard the phrase “bringing the Calvary”:

I have never heard the phrase "bringing the calvary."

OTOH, I have often seen the amusing confusion of "calvary" and "cavalry." https://t.co/KRhzAEewbu

Bryan A. Garner, the editor and chief of Black’s Law Dictionary, similarly marveled that the cavalry v. Calvary debate was a thing:

Who might have guessed that this point of English usage (cavalry/calvary) would come to the fore in the impeachment? @jaketapper #Impeachment #ImpeachmentTrial2 pic.twitter.com/UknrkGc7ox

As Washington Post fact-checker Glenn Kessler pointed out, even Merriam-Webster had previously “trolled” Trump for mixing up the words in December.

Funny: Trump defense team mocks House managers for mixing up calvary and cavalry but Trump himself retweeted the same mistake ….which promoted Merriam-Webster to troll him pic.twitter.com/piwkII7KCa

this was the Merriam-Webster report: https://t.co/xuOziKJjyQ