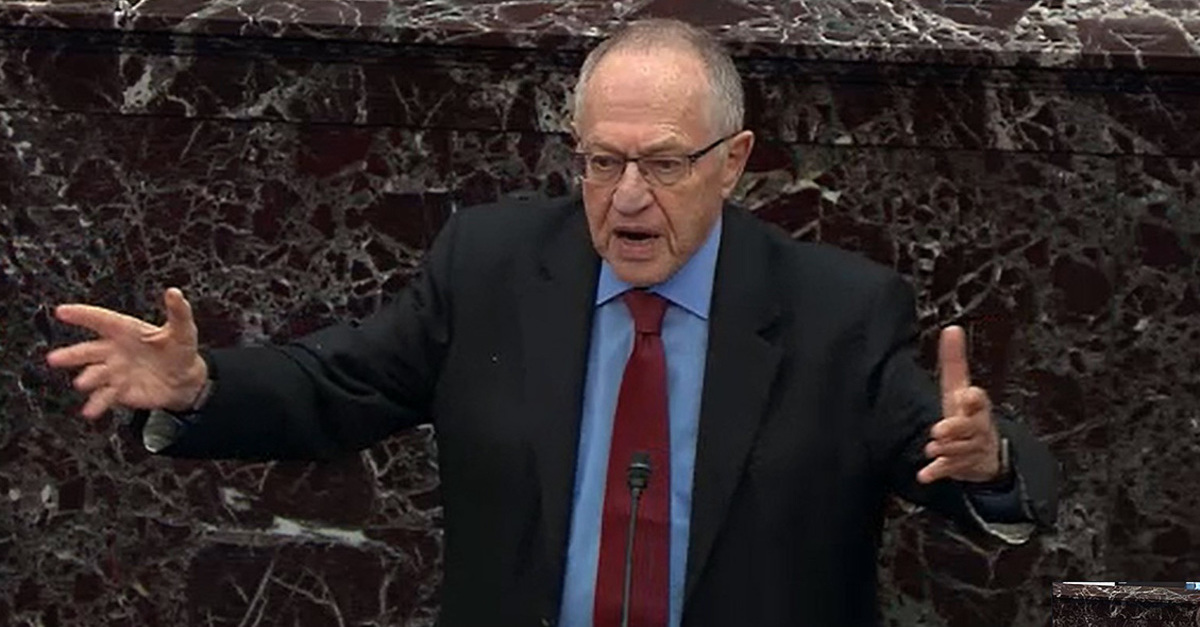 It was a freewheeling sort of day on the floor of the U.S. Senate as a question-and-answer session between politicians and President Donald Trump‘s defense team/House Managers led to a series of interesting and relatively surprising exchanges. Here are a few of the most notable.

Harvard Law Professor Alan Dershowitz torched a few boundaries and norms during his second appearance in support of the president. He started off by reciting a previous hypothetical.

Trump attorney Alan Dershowitz: "If a president does something which he believes will help him get elected in the public interest, that cannot be the kind of quid pro quo that results in impeachment." https://t.co/jKErQcS1Iy pic.twitter.com/zo4rL6Zbla

“What if a Democrat president were to be elected, and Congress were to authorize much money to either Israel or the Palestinians and the Democratic president were to say to Israel, ‘No, I’m going to withhold this money unless you stop all settlement growth’; or to the Palestinians, ‘I will withhold the money Congress authorized to you unless you stop paying terrorists’ and the president said, ‘Quid pro quo–if you don’t do it, you don’t get the money–if you do it, you get the money,'” he began with a Faulknerian wind-up. “There’s no one in this chamber that would regard [the Israel-Palestine example] as in any way unlawful. The only thing that would make the quid pro quo unlawful is if the quo were, in some way, illegal.”

Dershowitz then went in for the kill:

Miss the point? Dershowitz was essentially arguing that any action by a president–if done with an eye toward reelection–is definitionally not an impeachable act, because every politician believes their reelection is in the public interest. Reaction to Dershowitz’s argument was all-but unanimously negative.

Here’s a very small sampling of the outrage:

This would of course would mean that a president could not be impeached for doing literally anything in the service of his own reelection. https://t.co/tSO9pxCHuf

it's worth underlining just how completely bananas this argument is. Nobody but Dershowitz believes this. https://t.co/h7wga0p3YR

– When Dersh suggested reelection concerns fit in national interest, Bernie turned to Schatz, who mouthed either "WHA" or "WOW"

Accepting this argument would put us on a short path toward dictatorship, benevolent or otherwise. It’s incompatible with government of, by, and for the people. It’s government by egomania. https://t.co/yGRa7afsLk

Wait, sorry. That’s a real one.

II. So, what about Barack Obama? Would he have been impeached for this?

“Let’s use that analogy and make it more comparable to today and see how you feel about this scenario,” Schiff said. “President Obama, on an open mic, says to Medvedev. ‘Hey Medvedev, I know you don’t want me to send this military money to Ukraine because they’re fighting and killing your people. I want you to do me a favor though. I want you to do an investigation into Mitt Romney. And I want you to announce you found dirt on Mitt Romney. And if you’re willing to do that–quid pro quo–I won’t give Ukraine the money they need to fight you on the front line,’ Do any of us have any question that Barack Obama would be impeached for that kind of misconduct? Are we really ready to say that that would be okay?”

"Do any of us have any question that Barack Obama would be impeached for that kind of misconduct?" https://t.co/fGLWCMjIXu pic.twitter.com/4bRhVoX9fW

Sen. Ted Cruz (R-Texas) and Sen. Lindsey Graham (R-S.C.) huddled together to craft a response to Schiff’s Obama hypothetical. The duo submitted a question–read aloud by Chief Justice John Roberts–invoking the specter of the events at the heart of the current impeachment scandal. Namely: Joe Biden‘s son Hunter Biden and his unearned position on the board of serially corrupt Ukrainian petrochemical firm Burisma Holdings Limited.

21ST QUESTION, submitted by GOP Sens. Graham & Cruz: "In Schiff's hypothetical, if Pres. Obama had evidence that Mitt Romney's son was paid $1M per year by a corrupt Russian company & Romney had acted to benefit that company, would Obama have authority to ask for investigation?" pic.twitter.com/Q12mQx2Kk3

“In Mr. Schiff’s hypothetical, if President Obama had evidence that Mitt Romney’s son was paid $1 million per year by a corrupt Russian company and Mitt Romney had acted to benefit that company, would Obama have authority to ask that that potential corruption be investigated?” Cruz and Graham inquired.

“The hypothetical is a bit off because it presumes that in that hypothetical that President Obama was acting corruptly or there was evidence he was acting corruptly with respect to his son,” Schiff answered. “Would it have been impeachable if Barack Obama had tried to get Medvedev to do an investigation of Mitt Romney, whether it was justified or unjustified? The reality is for a president to withhold military aid from an ally or in the hypothetical to withhold it to benefit an adversary, to target their political opponent, is wrong and corrupt, period. End of story.”

He said the president could have sought investigations through a “legitimate law enforcement process,” but that’s not what happened here.

MSNBC host Chris Hayes wondered why Sens. Cruz and Graham didn’t raise questions about “the Burisma issue” in the past.

I’ll keep banging this drum until it bursts: Cruz and Graham WERE IN THE SENATE AT THE TIME and never raised the Burisma issue. Not once as far as we can tell. https://t.co/sn8yxKyidL

This part of the could be summed up in a question: Is the House’s obstruction charge against Trump without precedent given Democrats did not fight this tooth and nail in the courts (i.e. failed to even attempt to enforce their own subpoenas)? That’s essentially the issue here and one that even defenders of impeachment process have largely admitted Democrats ought to have extended their efforts and time on—at least a little. But now the partisan fog is thick and heavy, so maybe even the idea of an honest question is a bit naive at this point.

Sen. Chuck Grassley (R-Iowa) who also submitted a question via Roberts, gave it a go, asking: “Does the House’s failure to enforce its subpoenas render its ‘obstruction of Congress’ theory unprecedented?”

To which White House deputy counsel to the president Patrick Philbin replied, at length:

The answer is, Yes. As far as I’m aware, there’s never been a prior instance in which there’s been an attempt–even in the House, as in the Nixon proceeding, never mind in the Clinton proceeding, which actually left the House and came to the Senate–to suggest there can be obstruction of Congress when there hasn’t been anything beyond simply issuing a subpoena, getting resistance, and then throwing up your hands and giving up and saying: “Oh, well, that’s obstruction.”

Trump supporters had a field day with that call-and-response:

Philbin's answer is to once again AVOID the question of exec privilege, and try to defend the President's blanket and unlawful rejection of House oversight power.

The House didn't "choose not to challenge" that, THEY IMPEACHED HIM FOR OBSTRUCTION OF CONGRESS!

Somewhat related to the lingering fact of Democrats’ lackluster subpoena enforcement efforts is the question of executive privilege. Or, rather, and more accurately, the lack thereof.

“Why did the House of Representatives not challenge President Trump’s claims of executive privilege and/or immunity during the House impeachment proceedings?” asked a dishonest or confused trio of Republican senators via the chief justice.

Former GOP Rep. Justin Amash (I-Michigan) caught the upshot of Wednesday’s various discussions about subpoenas and privilege and courts and whatnot:

So that everyone is clear, Trump’s team is simultaneously arguing that the House should enforce its subpoenas in court *and* that it is unconstitutional for a court to enforce the House’s subpoenas.

Enter Sen. Lisa Murkowski (R-Alaska), an occasional voice of moderation and restraint in a caucus not much known for that. You may remember her for being the lone GOP vote against then-Supreme Court nominee Brett Kavanaugh. (In spirit, at least.)

Joining her in posing the question was Sen. Susan Collins (R-Maine).

“Witnesses testified [that] President Trump consistently expressed the view that Ukraine was a corrupt country,” Murkowski and Collins asked via Roberts, “Before vice president Biden formally entered the 2020 presidential race…did President Trump ever mention Joe or Hunter Biden in connection with corruption?”

Philbin was left with no choice in his answer.