‘This Is the Defense Argument? Whining About Process?’: Trump Impeachment Lawyers Ridiculed for Weak Case 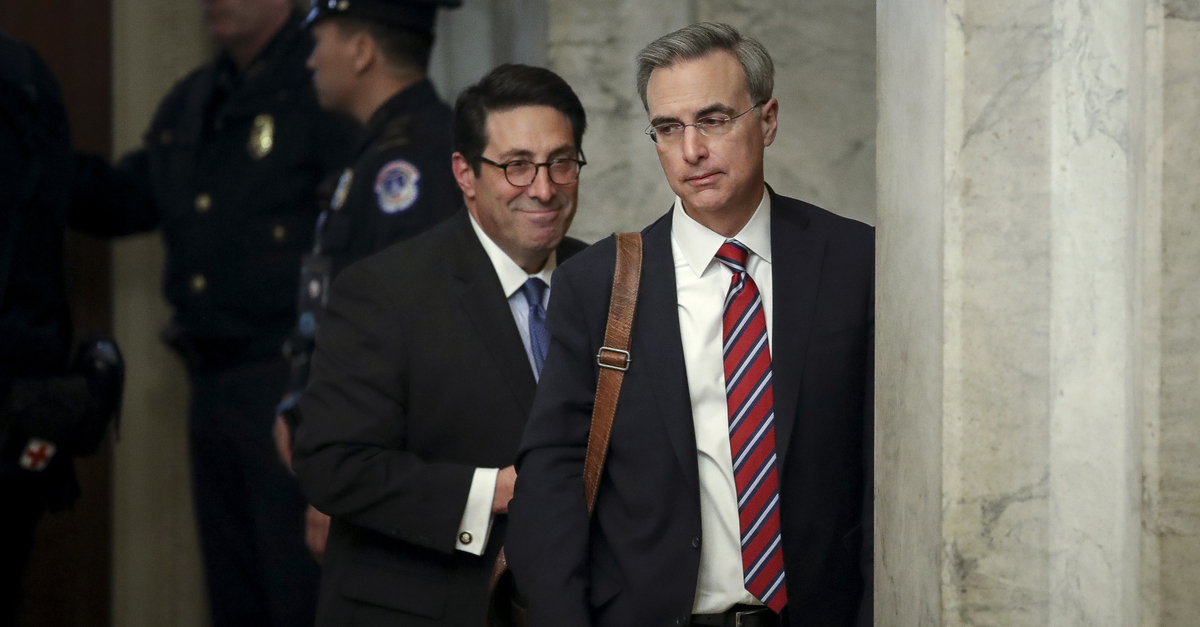 President Donald Trump‘s defense team began making their case in the U.S. Senate on Saturday morning. And, if the immediate response was any indication, the 45th president wasn’t sending his best.

White House Counsel Pat Cipollone stuck largely to the mechanics of the impeachment process so far–somewhat curiously taking issue with the procedure laid out in the U.S. Constitution.

After an extended period of evidence-free assertions that impeachment is an effort to take Trump off the ballot in 2020, Cipollone took up process concerns which largely focused on the idea that Democrats had not addressed the previously little-discussed concept of “burden sharing” during their prosecution of the president.

“They didn’t tell you that burden sharing was discussed in the call–in the transcript of the call–why?” Cipollone question-begged before reading aloud from a portion of the memo outlining Trump’s July 25, 2019 discussion with Ukrainian President Volodymyr Zelensky.

Per Cipollone, Democratic Party impeachment managers prosecuting the president unfairly made their own case by not relaying context said to be favorable to the defendant-president.

“They didn’t bother to read the key evidence of the discussion of burden sharing that’s in the call itself,” Cipollone noted. “Now that’s emblematic of their entire presentation.”

Cipollone then gave a long-winded defense of process concerns:

With each example, ask yourself, why am I just hearing about this now after 24 hours? Why? And the reason is, we can talk about the process, we will talk about the law, but today, we are going to confront them on the merits of their argument. Now, they have the burden of proof. They have not come close to meeting it. In fact, and I want to ask you to think about one issue regarding process–beyond process. If you were really interested in finding out the truth, why would you run the process the way they ran? If you were really confident in your position on the facts, why would you lock everybody out of it? From the president’s side. Why would you do that? We will talk about the process arguments but the process arguments also are compelling evidence on the merits because it’s evidence that they themselves don’t believe in the facts of the case. The fact that they came here for 24 hours and hid evidence from you is further evidence that they don’t really believe in the facts of their case.

Common Dreams senior editor Eoin Higgins pronounced the initial proceedings in favor of the defendant a dud. “This is the defense argument?” he tweeted. “Whining about process?”

This is the defense argument? Whining about process?

And the hits kept rolling in.

Pat Cipollone is seriously arguing that removing a president through impeachment — which is literally the remedy for presidential misconduct written into the Constitution — would violate the Constitution.

Cipollone criticizes House managers because they did not “give you all of the facts.” So does he now support calling Bolton and Mulvaney and producing all the White House and State Department records that Trump has blocked? I mean, if wants “all the facts”…. #ImpeachmentTrial

But it wasn’t just Cipollone who was criticized for his Saturday performance.

“Mister [Adam] Schiff and his colleagues told you the intelligence community assessment, Russia was acting alone, responsible for election interference implying this debunked the idea there might be interference from other countries including Ukraine,” Sekulow said. “Mister [Jerrold] Nadler deployed an argument saying Donald Trump thought, quote, Ukraine, not Russia, interfered in our last presidential election. This is basically what we call a straw man argument. Let me be clear. The house managers in a 23 hour period kept pushing this false dichotomy that it was either Russia or Ukraine but not both.”

“The whole defense is about process–it’s wrong on the merits but it also completely fails to deny or address the facts that Democrats have proven,” Rocah told Law&Crime via email. “It’s supposed to be a hook for Republicans to hang their hat on and say we don’t need to vote for more evidence. It’s a cop-out.”

National security attorney Bradley P. Moss was similarly none-too-wowed by the case coming from all the president’s men:

You get what you pay for, and in this case, the president is getting a defense that would charitably be viewed as whining about snitches.