Alan Dershowitz in 1999: If I Were in Charge of Defending Bill Clinton, I’d Say Fire Dershowitz 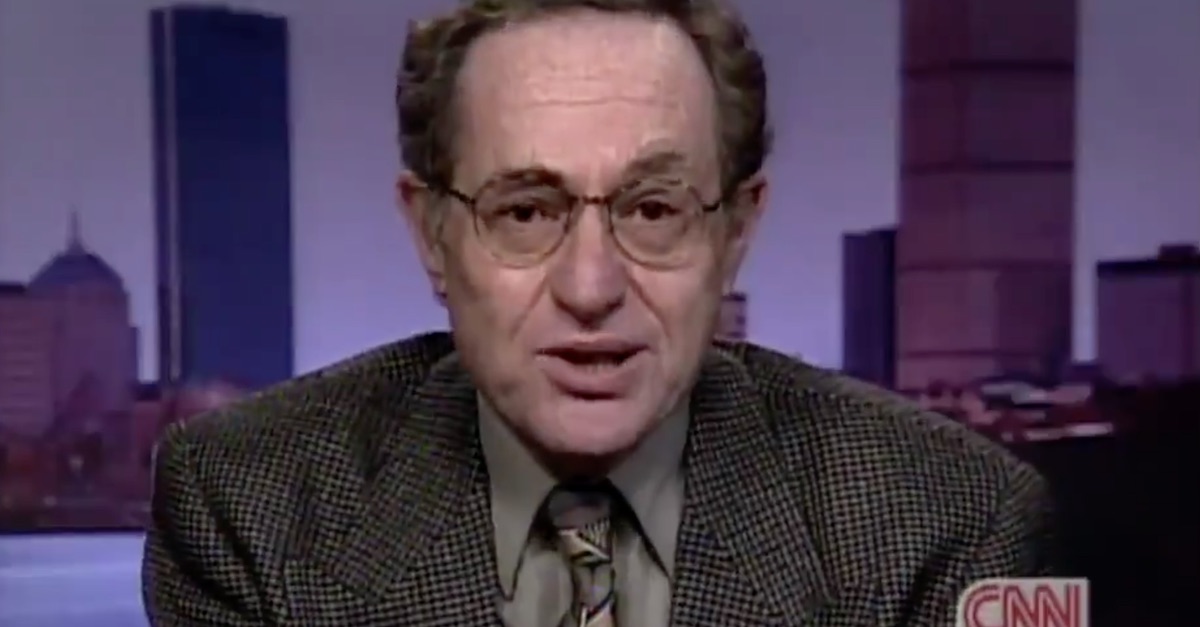 In recent days, there hasn’t been any shortage of two-decade-old videos of key players in impeachments then and now talking about the “issues.” Whether these videos related to Ken Starr and Brett Kavanaugh, Lindsey Graham (R-S.C.), or Donald Trump well before he was president, these videos have been eye-opening for self-explanatory reasons. You can add this video below of Harvard Law professor emeritus Alan Dershowitz to the mix.

Dershowitz, putting on his criminal defense attorney hat for a CNN appearance in 1999, was asked how he would approach defending Bill Clinton in the Senate. His answer? “The first thing I would is say, ‘Fire Dershowitz.’ We don’t want to get involved with people saying, ‘O.J.’s lawyer is representing the president.'”

Speaking of O.J. Simpson’s and Jeffrey Epstein’s lawyer acting as a defense attorney for the president, Dershowitz denies that this is what will be happening at President Trump’s impeachment trial. Instead, Dershowitz says–and a number of his legal peers disagree with the distinction–he will merely be defending the Constitution in a way that is favorable to the president, not acting as a “full-fledged member” of Trump’s impeachment team.

The video above hasn’t been the only one to recirculate over the last day or so. After Dershowitz said days ago that “Abuse of power, even if proved, is not an impeachable offense,” Dershowitz’s pro-impeachment Harvard Law colleague Laurence Tribe quoted remarks from another interview back in 1998.

“It certainly doesn’t have to be a crime if you have somebody who completely corrupts the office of president and who abuses trust and who poses great danger to our liberty,” Dershowitz said at the time.

Then the video popped up.

A Twitter spat ensued when Dershowitz said there was “no inconsistency between what I said during the Clinton impeachment and what I am saying now.”

Oy vey! Now “criminal-like” is supposed to be a thing?! And anyway what’s charged in Article I is as “criminal-like” as anything imaginable. Bribery, extortion, illegal impoundment, campaign finance violations, election cheating, going after political opponents. Mob-like too! https://t.co/6uq4t4o5oD

Tribe is trying to sensor my arguments . The headline of Tribe’s article says it all: “Trump’s lawyer shouldn’t be allowed to use bogus arguments on impeachment.”

Oh for g-d’s sake, @AlanDersh, you’ve gotta be kidding! I’m not trying to “sensor” — or censor — anyone. Have you even lost the ability to get a figure of speech? Go ahead and keep talking. The more you say, the weaker your pretense to speak as Counsel for the Constitution gets. https://t.co/KAbJv50j8r

Tribe so afraid of the Senate hearing my constitutional arguments that he actually says, I “should not be allowed” to make them. Is that the American way?