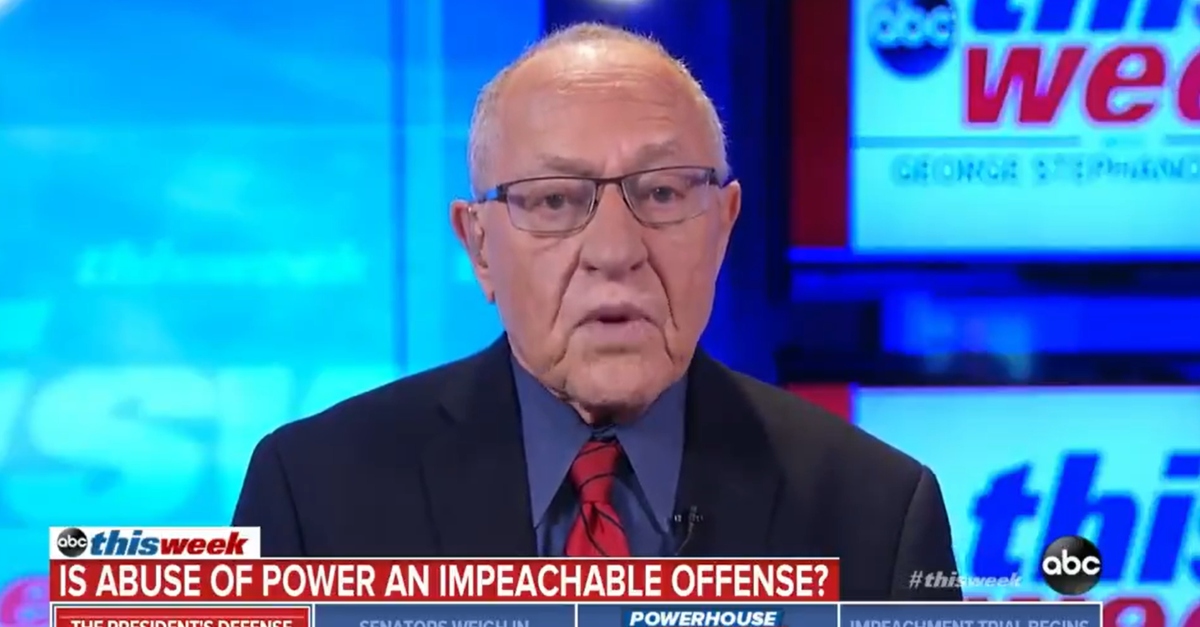 “There is no sound basis for Alan Dershowitz to claim that abuse of power is not an impeachable offense,” he wrote at the beginning of a lengthy tweet thread. “In addition to being at odds with common sense, this claim is contradicted by a clear and consistent body of historical evidence.”

He had been asked to weigh-in on the other professor’s stance.

“Abuse of power, even if proved, is not an impeachable offense,” Dershowitz said. “That’s what the framers rejected. They didn’t want to give Congress the authority to remove a president because he abused his power.”

President Donald Trump was impeached last month for abuse of power, and obstruction of congress.

Mikhail pointed out the history of Warren Hastings, Britain’s first Governor-General of India. Parliament member Edmund Burke wrote impeachment charges against the official in 1786, and this case (which ended in a 1795 acquittal) overlapped with the writing of the U.S. Constitution and the creation of the federal government.

Mikhail said that the Hastings situation informed the Founders’ drafting of Article II, Section 4 of the U.S. Constitution:

“Burke’s celebrated speeches and reports against Hastings—widely reprinted in US newspapers at the time—often accused him of abuse of power,” wrote Mikhail, a constitutional and criminal law professor.

In his speeches, Burke argued that abuse of power was still impeachable even if it didn’t violate the law as written.

Burke’s argument continued through the lifetime of the case.

Indeed, abuse of power was on the minds of the Founders during the 1787 Constitutional Convention.

Finally, there is the text of the Constitution itself, which imposes solemn obligations of “faithful execution” on the President in exercising all of his executive powers. Abusing delegated powers is the antithesis of faithfully executing them. /12

Then again, you don’t have to go back over 200 years to see that lawmakers thought abuse of power was impeachable. Lawmakers during the impeachments of Presidents Andrew Johnson and Bill Clinton, and almost-impeachment of Richard Nixon thought so.

“All of these sources and others like them (e.g., Hamilton’s remark on the ‘abuse or violation of some public trust’ in Federalist 65) suggest that Dershowitz – and Trump – will have a hard time making a persuasive case that ‘abuse of power’ is not an impeachable offense,” Mikhail wrote. “For at least some GOP Senators, Republican voters, or others who profess to be originalists, however, Burke’s impeachment of Hastings may be the most relevant and instructive precedent confirming what should be obvious: grave abuses of power can be impeachable.”

Dershowitz continued his controversial defense of Trump on Sunday.

.@GStephanopoulos: “Is it your position that President Trump should not be impeached even if all the evidence and arguments laid out by the House are accepted as fact?”

Dershowitz is set to make an argument on the president’s behalf regarding the “constitutional criteria” for impeachment.