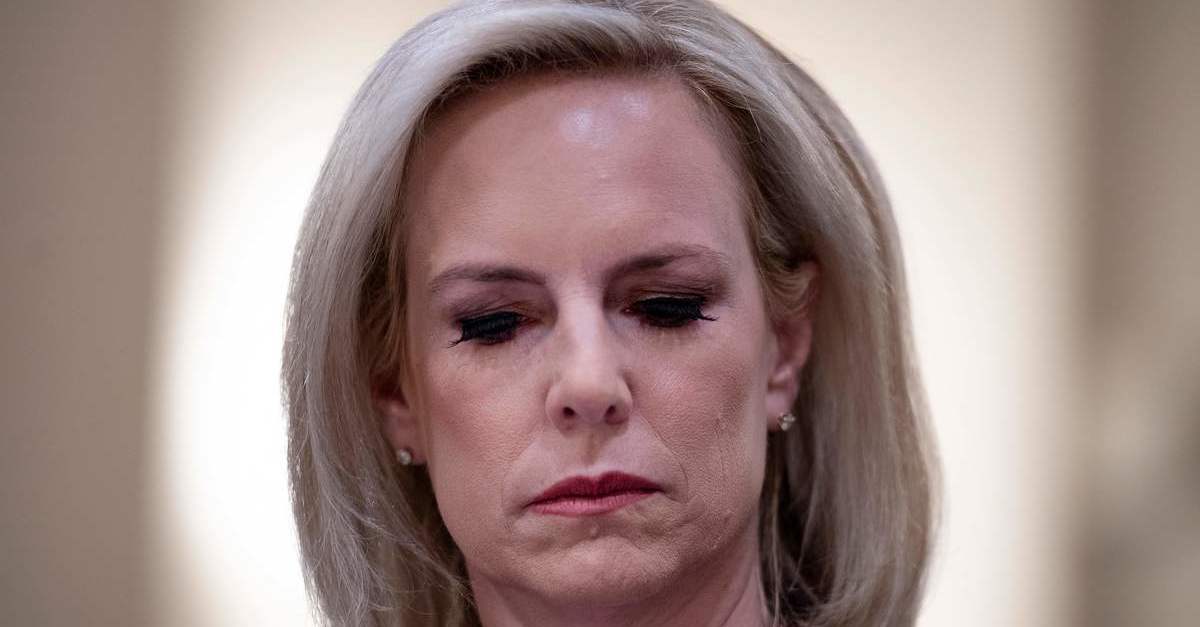 Former Department of Homeland Security (DHS) secretary Kirstjen Nielsen will no longer appear at Atlantic Fest, according to activists opposed to her participation and the event’s organizers.

Her publicized appearance was a lightning rod from the jump–progressive activists and anti-Trump resistance figures questioned the move by the centrist magazine to feature Nielsen on the lineup for their annual ideas-and-thought-leaders-focused symposium.

Nielsen was scheduled to be interviewed by an Atlantic journalist regarding the Trump Administration’s family separation policy–which was implemented by Nielsen during her tenure as DHS secretary.

According to the magazine, however, “Nielsen’s team has let [the magazine] know that she is no longer able to participate in the interview” but didn’t elaborate on why Nielsen could no longer make the high-profile gig.

Although it appears Nielsen is dealing with an undisclosed family matter and is therefore unable to make it to the event, activists are nonetheless claiming victory.

“Public pressure from thousands of CREDO members and grassroots activists forced Kirstjen Nielsen to withdraw from the Atlantic Fest, which is a huge victory and should set a precedent for not putting profits over morals when it comes to Trump administration alumni,” CREDO Action campaign director Nicole Regalado said in a statement obtained by Law&Crime. “No one from Trump’s administration should get a soft landing to sanitize their actions while supporting and pushing forward a white nationalist, fascist agenda.”

Regalado also said that her organization was emboldened by the win:

Atlantic Media isn’t off the hook–we will continue to lean on media conglomerates and other corporations to think twice about providing a platform to people who worked hand-in-hand with Trump to separate families, lock babies up in cages, and terrorize communities of color. Public backlash will be swift and powerful for anyone who tries to help rehabilitate the reputations of Trump’s top henchmen.

During the height of criticism aimed at the family separation policy, members of CREDO Action protested outside Nielsen’s house and played audio of crying immigrant children who had been caged after being separated from their families by U.S. immigration agents.

The activist group also told Law&Crime they planned to use “a mobile billboard [to] circle the event venue to call out how the Atlantic was allowing Nielsen use them to clean up her image after separating migrant children and putting them in baby jails.”