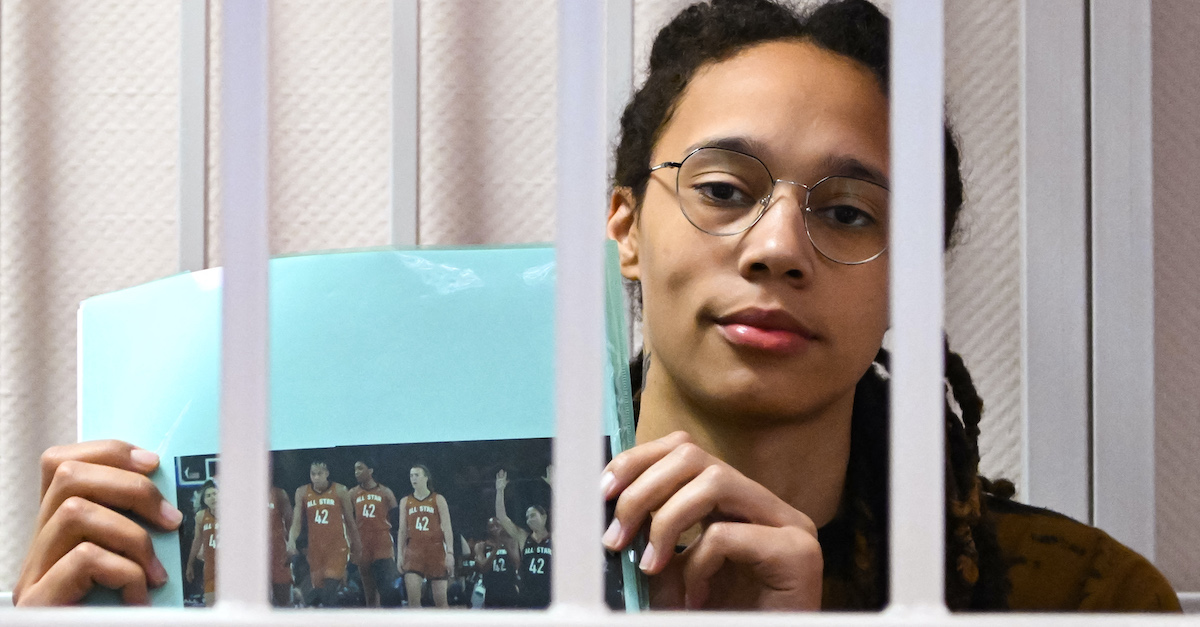 U.S. WNBA basketball superstar Brittney Griner sits inside a defendants’ cage with a picture depicting her WNBA fellow players wearing jerseys with her number, 42, during the leagues All-Star Game, during a hearing at the Khimki Court in the town of Khimki outside Moscow on July 15, 2022.

As WNBA star Brittney Griner faces the possibility of 10 years in a Russian prison, that country’s government reportedly hopes to swap her for a notorious arms trafficker locked up in a U.S. prison.

The latest episode of Law&Crime’s podcast “Objections: with Adam Klasfeld” looks into the global phenomenon of “hostage diplomacy” and the difficult choices governments face when an authoritarian regime detains one of their citizens.

“We don’t want to continue to put ourselves in situations where Americans are just taken at will so that Russians or other countries that have somewhat of a hostile relationship with the United States are able to negotiate for things that they want,” noted attorney Adrienne Lawrence, a TV host and the author of the book Staying in the Game: The Playbook for Beating Workplace Sexual Harassment.

Shortly before Russia’s invasion of Ukraine, Griner found herself detained at Moscow’s Sheremetyevo Airport, where customs officials said they found vape cartridges with trace amounts of hashish oil. The timing of her arrest and detention raised eyebrows because Russia would enter Ukrainian territory and launch their attacks roughly a week later.

Griner pleaded guilty to the drug charges in a Russian court, but Lawrence interpreted that as a strategic decision, rather than an admission of a crime.

“The reality is that when we look at the Russian courts and the rate of conviction, we’re looking at 99.75 percent,” Lawrence noted, adding that the rate “harkens back to the Soviet era.”

She also pointed out that certain authoritarian governments have been known to plant drugs on opposition journalists and other designated political enemies, a trend known to be a longtime tool in Vladimir Putin’s Russia. Contesting the charges in court stands vanishingly long odds of succeeding.

As a result, Lawrence said that Griner might rightly suspect: “They have found me guilty from the moment that they slapped handcuffs on me and brought these charges, and so falling at the mercy of the court is likely in her best interest.”

Since her arrest, reports have surfaced that Russia is interested in trading Griner for Viktor Bout, a Russian arms trafficker frequently described as the “Merchant of Death.” Authorities believe that Bout armed dictators, despots and warring factions around the globe, including in Afghanistan, Angola, the Democratic Republic of the Congo, Liberia, Rwanda, Sierra Leone and Sudan.

“The fact that the Biden administration now has to consider whether it will actually contemplate letting go of this individual who has been designated the ‘Merchant of Death’ is a very difficult position to be in,” Lawrence noted. “I don’t necessarily know that it is something that the U.S. would do.”

In 2008, Bout global trade came crashing down when federal agents posed as Colombian guerrillas for a sting operation, organizing a meeting for a fake sale of weapons of mass destruction in Thailand. They swooped in to arrest Bout when he shook hands on the deal.

A federal jury convicted him of all charges in 2011, finding he planned to sell the guerrillas surface-to-air missiles, guns, ammunition, explosives, mines and weapon-ready airplanes.

Sentenced to 25 years in a U.S. prison, the now-55-year-old Bout is currently scheduled for release in 2029, but Russia may hope to accelerate that timeline with a trade. Investigative journalist Douglas Farah, who helped expose Bout’s activities, and former U.S. ambassador to Russia Michael McFaul reportedly expressed support for such an arrangement.

“Letting go of Viktor Bout may be the best thing,” Lawrence said.

The risk of such a trade may be reinforcing the dynamic of what some experts call “hostage diplomacy,” the practice where authoritarian regimes execute dubious arrests for foreign policy goals. The trend has been denounced before in Turkey’s since-dropped charges against U.S. evangelical pastor Andrew Brunson and North Korea’s arrest of Otto Warmbier, whom a U.S. court ruled was tortured to death by the regime.

“The reality is, if you are willing to give things up in order to get back individuals who are a value to your country — who you do not necessarily believe deserve the punishment that they are doled out in these nations — then it puts you in a position where you can always be extorted,” Lawrence noted.

On Tuesday, President Joe Biden issued an executive order respond to “hostage diplomacy” intended to ratchet up the costs on the countries that practice it.