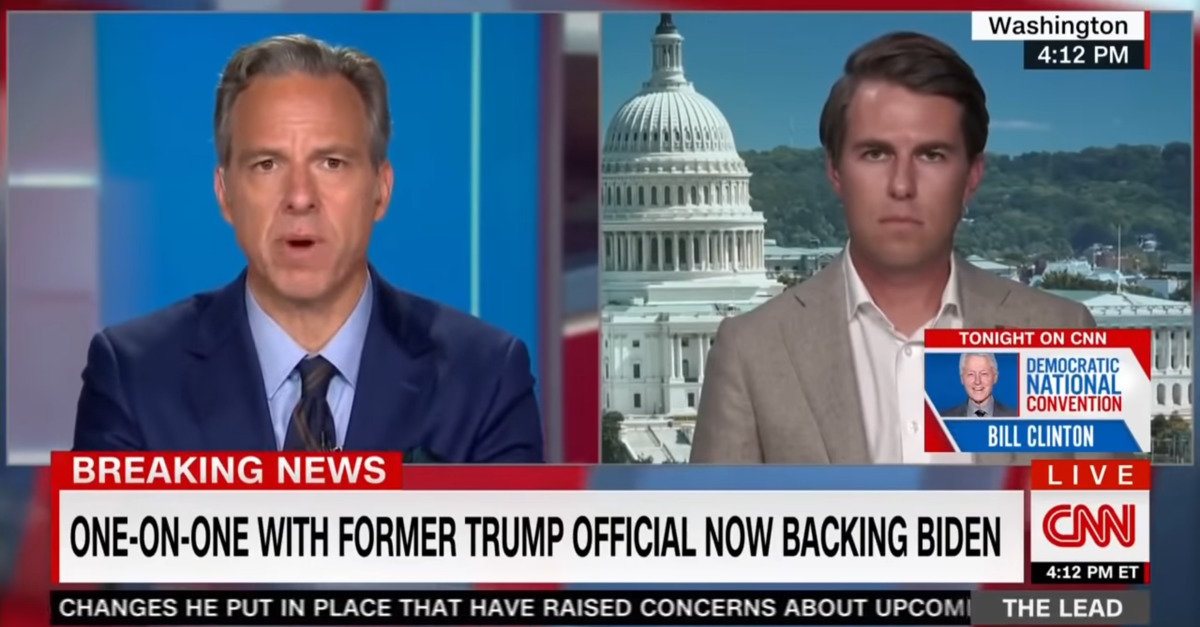 Yet another whistleblower complaint threatens to roil the White House amid President Donald Trump’s reelection bid.

At the root of the complaint are multiple allegations that current and high-ranking Trump administration figures doctored intelligence reports to align with administration propaganda–and then worked to ruin the whistleblower’s career after he spoke out.

On Tuesday, September 8, former Department of Homeland Security (DHS) Office of Intelligence and Analysis (I&A) acting under secretary Brian Murphy filed a 24-page complaint with the DHS Office of Inspector General (OIG) alleging multiple “violations of federal law and regulations, as well as abuses of authority.”

Those violations, per Murphy, were committed by former DHS Secretary Kirstjen Nielsen, Acting DHS Secretary Chad Wolf and Deputy DHS Secretary Kenneth Cuccinelli. According to the complaint, Murphy made legally protected disclosures about the alleged illegality and was subsequently retaliated against.

Notably, former DHS deputy chief of staff and recently hired CNN contributor Miles Taylor also appears as one of the culpable parties in the complaint–as both one of the officials who allegedly doctored intelligence reports and who took part in the retaliation campaign against Murphy when the whistleblower complained.

Mr. Murphy reasonably believes in good faith that the relevant RMOs –Messrs. Wolf and Taylor and Ms. Grady, in particular – were not only aware of the details of Mr. Murphy’s refusal to engage in what he viewed as manipulation and improper administration of an intelligence program, but also that Mr. Murphy was the individual who had filed the first OIG complaint who would have been present in the meetings where the information was discussed that underlay the allegations in the first OIG complaint. Both Mr. Glawe and Mr. Hanna are aware Mr. Murphy was the individual who submitted the two anonymous OIG complaints, as Mr. Murphy informed them of that fact.

“These efforts to terminate Mr. Murphy’s employment occurred in the context of Mr. Murphy’s protected disclosures,” the complaint notes.

The initial story about the whistleblower complaint published by CNN and written by Zachary Cohen does not mention Taylor’s high-profile role in the Murphy complaint. Law&Crime reached out to Cohen and CNN for comment on this story but no response was forthcoming at the time of publication.

Taylor made a couple of statements on aspects of the complaint.

Miles Taylor, elaborating on one small part of the new whistleblower complaint pic.twitter.com/v5bv2LaB95

Taylor said in the statement to the Daily Beast that it was “false” that he was involved in a pressure campaign.

Taylor recently claimed that a White House smear campaign was launched against him.

Also of note is that Murphy is being represented by Mark Zaid, a lawyer who represented the Ukraine whistleblower.

“The retaliatory actions were taken and/or threatened to be taken in light of at least five sets of protected disclosures made by Mr. Murphy between March 2018 and August 2020,” the complaint claims. “The protected disclosures that prompted the retaliatory personnel actions at issue primarily focused on the compilation of intelligence reports and threat assessments that conflicted with policy objectives set forth by the White House and senior Department of Homeland Security (DHS) personnel.”

The first set of protected disclosures concerns alleged perjury before the U.S. Congress committed by Nielsen on two separate occasions.

According to Murphy, Nielsen provided inaccurate and inflated claims of known or suspected terrorists (KSTs) entering the country through the U.S.-Mexico border. The complaint terms this alleged subterfuge a “knowing and deliberate submission of false material information.”

In testimony on December 20, 2018, Nielsen told members of Congress that 3,755 individual KSTs had been documented crossing the border. That number, in actuality, was “no more than” three such individuals. Murphy believes that Nielsen intentionally conflated the numbers of KSTs with another form of undocumented immigrant and later filed an anonymous OIG complaint–which was apparently never acted upon in any serious manner.

On March 6, 2019, Nielsen testified before Congress again. And, for the second time, Murphy believes she perjured herself.

On March 5, 2019, Mr. Murphy participated in another preparation session with Secretary Nielsen, this time in advance of her testimony before the House Committee on Homeland Security. Messrs. Wolf and Taylor were also present. During the session, Mr. Murphy provided Secretary Nielsen with documentation reflecting that the number of documented KSTs crossing the southwest border only consisted of no more than three individuals, not 3,755 individuals as she had previously attested to in her testimony on December 20, 2018. Mr. Wolf and Mr. Taylor responded by saying Secretary Nielsen should claim the details were classified, state any KST crossing was one too many and deflect away from addressing the significant discrepancy in the data. Mr. Murphy advised Secretary Nielsen that he did not believe that was appropriate, and noted that the few “known” KSTs who were apprehended were derivative contacts, in so much as they merely had a name or phone number of a person who was known to be in contact with a terrorist. At that point, Mr. Murphy was removed from the meeting by Mr. Wolf.

“It is Mr. Murphy’s good faith belief that the testimony Secretary Nielsen delivered on March 6, 2019, regarding KSTs again constituted a knowing and deliberate submission of false material information,” the complaint continues. “Mr. Murphy outlined that assessment in his anonymous May 13, 2019, OIG complaint.”

The complaint also alleges that Taylor and others pressured Murphy “to ensure” that intelligence assessments “produced for” Nielsen “supported the policy argument that large numbers of KSTs” were infiltrating the country via its southern border.

Murphy declined those instructions, apparently viewing it as improper and that “what was being requested was a felony.”

When Murphy provided his un-doctored assessments to Nielsen, however, “there subsequently would be e-mail or phone calls from Mr. Taylor” and other administration officials “seeking to have the underlying intelligence data reinterpreted to fit the White House’s policy.”

Murphy’s complaint goes on to document repeat modification of intelligence assessments to fit the White House’s preferred narratives on topics including the threat posed to the country by white supremacists (which the administration downplayed), the threat posed to the country by adherents of so-called “ANTIFA” tactics (which the administration played up), and an effort to whitewash data about Guatemala, Honduras, and El Salvador “outlining high levels of corruption, violence, and poor economic conditions in the three respective countries.”

Mr. Murphy made several protected disclosures between March 2018 and August 2020 regarding a repeated pattern of abuse of authority, attempted censorship of intelligence analysis and improper administration of an intelligence program related to Russian efforts to influence and undermine United States interests. The relevant officials at issue were Secretary Nielsen and Messrs. Wolf, Cuccinelli, Taylor, and Acting Deputy Director for the Office of the Director of National Intelligence, Kash Patel. The majority of the information underlying these protected disclosures is classified and cannot be provided in this unclassified submission.