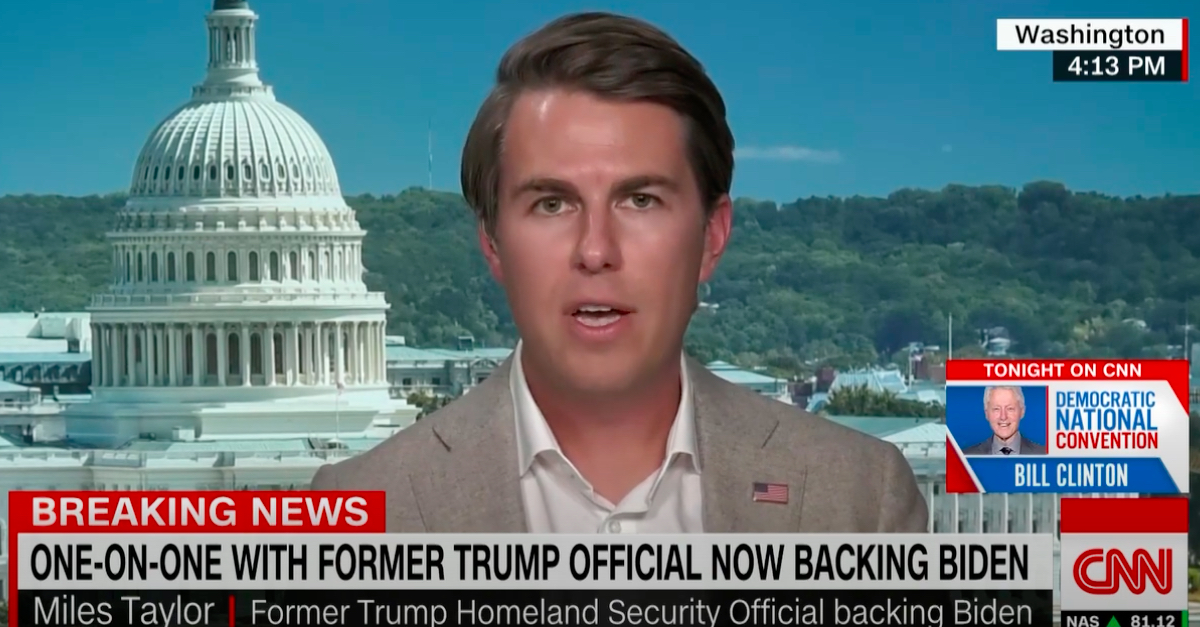 Miles Taylor, the former Trump administration official who on Monday renounced his former boss as “dangerously chaotic” while endorsing Democratic nominee Joe Biden for president, now claims his former colleagues are digging up dirt on him for criticizing President Donald Trump.

Appearing on CNN’s The Lead  Tuesday afternoon, the former Department of Homeland Security official told host Jake Tapper that because of his public rebuke of the president, the White House had instructed staffers to look into his past for damaging information that could be used to discredit his damning account of working in Trump’s executive branch.

Asked about Trump’s willingness to exploit the power of his office, Taylor offered the alleged character assassination directive as an example.

“I just got word within the past hour that a White House liaison employee at the department has been directed to go around to dig up dirt on me. Now, look, I’m fine with that. I can handle it,” Taylor said.

“But here’s the point: the administration, within hours of me speaking out about this, is already using taxpayer dollars for political purposes at the department. That just goes to show you that they can’t break out of this cycle,” he added.

In the two-minute television ad released to coincide with the start of the Democratic National Convention on Monday, Taylor said that what he saw in his two-and-a-half years at DHS was “terrifying.”

“We would go in to try to talk to [the president] about a pressing national security issue – a cyber-attack, terrorism threat – he wasn’t interested in those things. To him, they weren’t priorities. But the president wanted to exploit DHS for his own political purposes and to fuel his own agenda,” Taylor says directly to the camera.

The ad clearly reached President Trump, who unleashed a barrage of tweets Tuesday morning claiming he didn’t know who Taylor was while simultaneously maligning him as nothing more than a “disgruntled employee.”

“Many thousands of people work for our government. With that said, a former DISGRUNTLED EMPLOYEE named Miles Taylor, who I do not know (never heard of him), said he left & is on the open arms Fake News circuit,” Trump tweeted. “Said to be a real ‘stiff’. They will take anyone against us!”

Many thousands of people work for our government. With that said, a former DISGRUNTLED EMPLOYEE named Miles Taylor, who I do not know (never heard of him), said he left & is on the open arms Fake News circuit. Said to be a real “stiff”. They will take anyone against us!

In an earlier interview with Good Morning America’s George Stephanopoulos that aired just prior to Trump’s tweet, Taylor also claimed that he would not be the last former Trump administration employee to speak out against the president.

Taylor described his growing frustrated with the president, saying he consistently told agency officials to do things that were “inappropriate, unethical, or illegal,” before saying he fully expected others to renounce the administration.

“I can’t get into too much detail on it George, but I’m going to tell you this. The president hasn’t heard the last of us,” Taylor said, adding, “In fact, me speaking out yesterday – you can think of it as an opening salvo.”

"In fact, me speaking out yesterday—you can think of it as an opening salvo." https://t.co/M6vf1bC3Je pic.twitter.com/jaLOCQTPPc