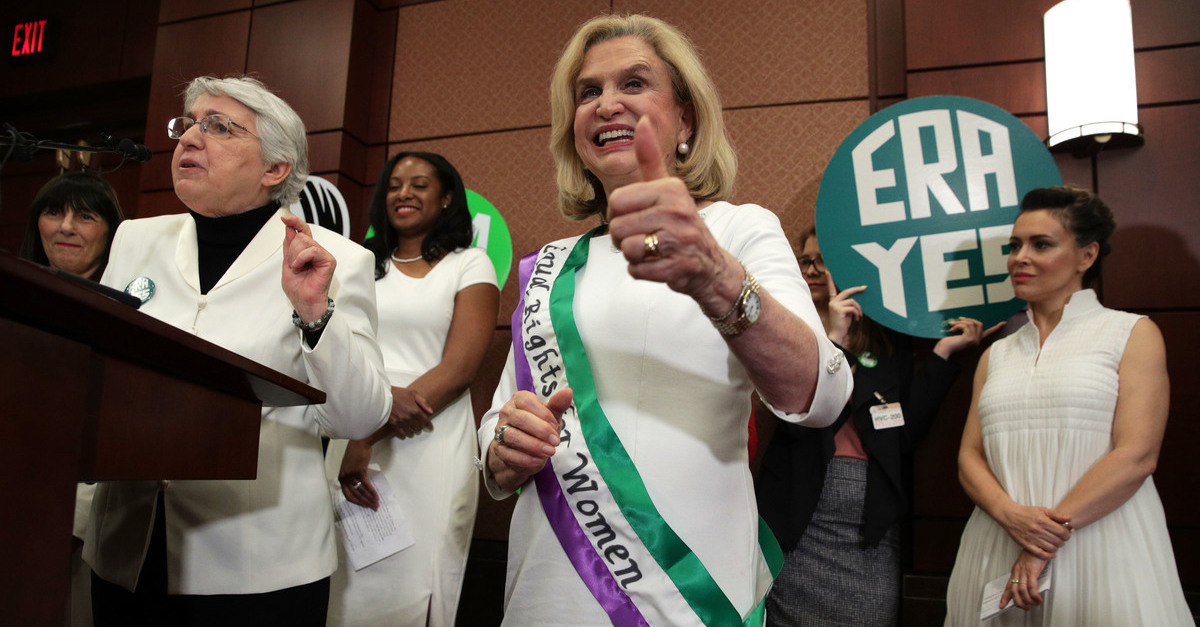 The history of the ERA is long and winding. To understand the significance of today’s hearing, context is important.

The Amendment, in its own words:

The ERA is an amendment to the United States Constitution, which, as proposed would read as follows:

Section 1. Women shall have equal rights in the United States and every place subject to its jurisdiction. Equality of rights under the law shall not be denied or abridged by the United States or by any State on account of sex.

Section 2. Congress and the several States shall have the power to enforce, by appropriate legislation, the provisions of this article.

Section 3. This amendment shall take effect two years after the date of ratification.

If the U.S. Constitution were amended to include this Article, it would establish equality for women as a matter of federal law, and would eradicate any suggestion that states can determine for themselves what (if any) level of gender discrimination will be tolerated.

The ERA is not a new concept; it was first introduced by suffragist Alice Paul in Seneca Falls in 1923, in conjunction with the 75th anniversary of the 1848 Woman’s Rights Convention. At that time, it was named the “Lucretia Mott Amendment,” and was supported by many professional women, the National Woman’s Party, and even high-profile women including Amelia Earhart. Despite being associated with the successes of the women’s movement, the ERA faced opposition.  Some of those adversaries were social conservatives, but others were progressive labor reformers who worried that an amendment establishing universal equality would thwart their efforts to create labor laws protecting women.

By the 1940s, the ERA was included in the party platforms of both Republicans and Democrats; it was renamed the “Alice Paul Amendment” and was slightly edited to better parallel the language of the 15th and the 19th Amendments. Through the 40s and the 60s, there wasn’t much significant movement on the Amendment. However, following the climax of the civil rights movement in the late 1960s, the momentum for ERA support began to build.

Wide Support and a New Opponent

Rep. Martha Griffiths (D-Mich.) re-introduced the Amendment in 1971, where it was approved by both the House and the Senate. Then, in accordance with Constitutional rules in Article V, it was submitted to statute legislatures for ratification, where, despite wide bipartisan support from both political parties, both houses of Congress and three presidents, it would ultimately languish.

The Amendment was given a March 1979 deadline for ratification by the states; by 1977, it had 35 of the needed 38 ratifications. While passage of the ERA appeared imminent, many underestimated the power of what became known as the “anti-feminist” movement.

Constitutional scholar and conservative activist Phyllis Schlafly spearheaded the “STOP ERA” campaign, arguing that passage of the ERA would mean the end of gender-specific privileges like alimony, preference in child-custody cases, dependent-wife benefits, separate restrooms, and exemption from military draft. The movement to defeat the ERA worked. Five of the 35 states that had ratified it actually rescinded their ratifications, leaving the final count eight states short of the necessary ¾.

Although then-President Jimmy Carter and Congress signed a joint resolution extending the ratification deadline to June 1982, it failed when that deadline came around. Congress immediately re-introduced the Amendment, and has continued to re-introduce it prior to every session of Congress thereafter.

A Tale of Two Laws

The story of the ERA, and particularly that of opposition to the Amendment, cannot be fully understood outside the context of the Civil Rights Act (Titles VII and IX specifically). While the ERA was being re-introduced in the early 1970s, women’s rights advocates scored a separate, but significant victory. Congress passed Title IX, which mandated equality for women in the world of education. Any educational institution or program receiving federal funding was thereafter prohibited from gender-based discrimination of any kind. Title VII was already implemented to prohibit employment discrimination on the basis of gender.

Like many arguments against socially-progressive legislation, modern critics of the ERA lament over bathroom use and the military draft. But another important anti-ERA argument focuses not on misogyny, but on efficiency. Because women are already protected, the ERA is unnecessary and therefore, inefficient – or so goes the argument.

Women don’t need the #EqualRightsAmendment. The beauty of the American Constitutional system is that it protects liberty for us all, regardless of sex. The only thing the #ERA can add to that protection is a fast track for the progressive agenda. #ERAHearing #IWpol

Today, the ERA has legal hurdles that transcend simple yea or nay votes. Should the ratifying states reach the ¾ threshold, there is sure to be litigation over whether the law allows states to rescind their ratifications, as some did back in the 70s. Another open question remains about which ERA has actually been ratified – the original one, or some amended or revived iteration thereof?

On Tuesday, April 30, the House Judiciary Committee held a hearing on restarting the process to ratify the ERA – the first time ERA discussions have occurred on Capitol Hill in 36 years.

The hearing resulted from a resolutions sponsored by Reps. Jackie Speier (D-CA) and Carolyn Maloney of (D-NY), which aim to eliminate the Congressional deadline and move forward to the Amendment process. “Women and men made history today by demanding equality and justice at the first congressional hearing to ratify the ERA in 36 years,” said Rep. Jackie Speier about Tuesday’s proceeding.

Rep. Maloney called the momentum toward passage of the ERA “louder than ever before,” and remarked that the climate for women’s rights have changed. “The #MeToo and Time’s Up movements have shined a light on the discrimination that persists in this country. And it is up to us to harness the energy of these movements to break through the final barrier to finally ratify the ERA,” she said.

The ERA hearing was attended by many high-profile women’s rights activists, including Alyssa Milano and Patricia Arquette.

The absence of the Equal Rights Amendment is a stain on our Constitution and our country. Women deserve to see their equality recognized. We’re seizing our power and demanding the #ERANow! #ERAHearing

“Women have waited 232 years to be enshrined as full and equal citizens. Why? Because in 1787 women were left out of the Constitution intentionally.”@PattyArquette speaks in front of a House committee during a hearing on the Equal Rights Amendment. pic.twitter.com/QHRk7Sm0Rx

Whether Tuesday’s hearing will eventually culminate in a Constitutional Amendment is far from certain. Still, the event itself is both historic in its own right and potentially influential as the 2020 election approaches.

Virginia state lawmaker Jennifer Carroll Foy (D) warned her state’s representatives, ”If we can’t change their minds, we will absolutely change their seats.”

Video of the hearing can be accessed here.

Editor’s Note: This piece was updated to include additional information regarding the resolutions discussed during Tuesday’s hearing.