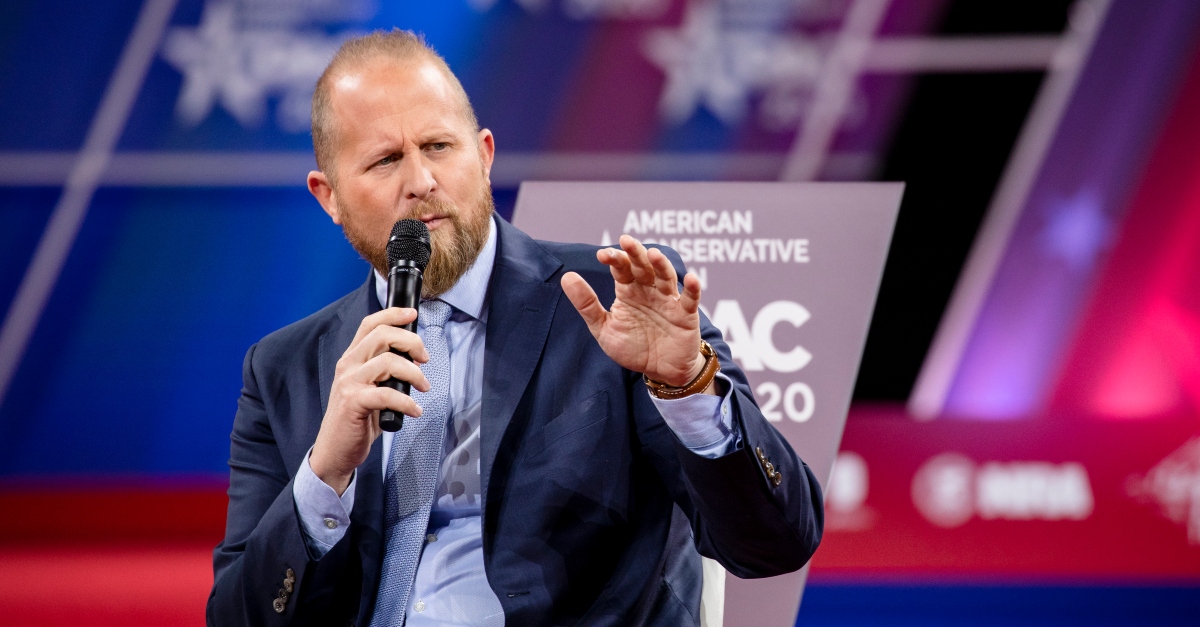 Brad Parscale, the former campaign manager for President Donald Trump, was detained on Sunday night after his wife reported him threatening suicide, police in Florida said. Authorities said he was detained under the state’s Baker Act, a law that lets authorities take people into custody if they are considered a potential danger to themselves or others.

Parscale’s wife said he was armed and threatening to hurt himself, cops said in a South Florida Sun Sentinel report. Police said they reached him and got him to step out of the home. He was brought to the Broward Health Medical Center.

“We went out and it was very short,” Fort Lauderdale Police Chief Karen Dietrich said. “We went and got him help.”

The police report obtained by Local 10 described a contentious situation. Parscale’s wife told cops that he had made statements about shooting himself. She had bruises on her arms and face, scratches on her face, which she said were from a physical altercation with her husband from several days before, according to police.

In this story, she said they got into an argument on Sunday, and that Parscale “manipulated his slide to the rear loading his firearm in front of her.” She fled the home, and she heard “a loud bang,” police said.

Cops said an officer got in touch with Parscale on the phone: the man slurred his speech as if drunk, and he appeared to be crying. Crisis negotiators were called in because he refused to exit the residence, police said.

Parscale’s wife said he had been stressed for the previous two weeks, and made suicidal statements for a week, authorities said. She said he drinks and lives with post-traumatic stress disorder, according to this story.

Christopher Wilson, an officer who is friends with Parscale, managed to get him out of the residence, but another officer did a “double leg take down” when Parscale didn’t follow orders to get on the ground, cops said in the Local 10 report.

The heart of the Baker Act is involuntary commitment, Professor H. Scott Fingerhut told Law&Crime in an interview conducted via phone and email on Monday.

The law gives police the ability to make a determination that individuals should be held at a mental health facility for up to 72 hours.

Frequently, people are analyzed by mental health experts and are not held for the full amount of time, said the professor, who teaches criminal procedure, trial advocacy, and civil and criminal pretrial practice at Florida International University. Patients usually calm down, show they are not a danger to themselves or others, and they get a treatment plan.

It is possible though rare for people to actively seek to be committed under the Baker Act, Fingerhut said. As an example, he described a scenario in which someone with resources could afford to go to a facility where they can be treated but not as an involuntary patient.

Chief Dietrich in the Sun-Sentinel report said that Parscale went with police willingly.

“Hardly sounds like a ‘voluntary’ situation to me,” said Fingerhut, responding to the allegations in the Local 10 report.

Cops said that they took possession of 10 guns Parscale had at the home. The professor said he would not be surprised if the state started proceedings to remove the firearms from his possession.

Police did not announce charges.

“He’s lucky he wasn’t arrested for misdemeanor battery on his wife, and felony battery on a police officer and felony resisting arrest with violence,” Fingerhut said.

Police don’t need a court order or doctor’s analysis to get people detained for the initial 72 hours, the professor said. That’s why the law can be dangerous. For example, at its worst, it would be used to gain an advantage in litigation. At its best, it can help put people on a path to better health.

The question is what happens by the time the patient reaches the 72-hour limit for detention. There is no problem if the patient wants to stay, or submits to voluntary outpatient treatment. But if the patient refuses, then the facility has to let the court know, and the patient has to have access to an attorney. The judge would preside over a hearing in which witnesses are examined and cross-examination. The court would then issue a ruling.

Parscale could not be reached for comment. A reporter for the Sun Sentinel went to his home on Sunday evening. No one initially answered, but a woman opened as the reporter was stepping away. She looked at the reporter, then shut the door.

“Brad Parscale is a member of our family and we all love him,” Trump campaign communications director Tim Murtaugh told the Sun Sentinel in a statement. “We are ready to support him and his family in any way possible. The disgusting, personal attacks from Democrats and disgruntled RINOs have gone too far, and they should be ashamed of themselves for what they’ve done to this man and his family.”

The Baker Act explicitly says that patients can vote if they are otherwise eligible under Florida law.

“It’s not like a felony conviction of a crime,” Fingerhut noted.