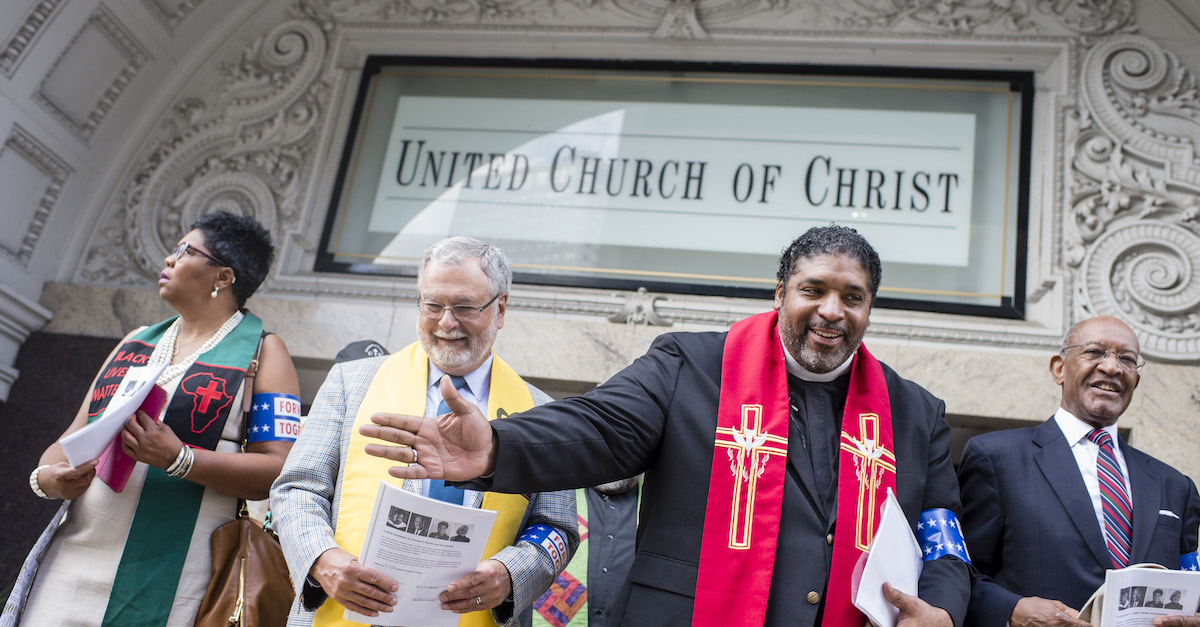 A July 11, 2016 file photo shows a group of leaders of various faiths, including the Rev. Dr. William J. Barber, II, preparing to lead a march from The United Church Of Christ in Cleveland, Ohio, to deliver a ‘Higher Ground Moral Declaration’ to RNC headquarters. The declaration called on then-presumptive 2016 Republican presidential nominee Donald Trump and political candidates of both parties to embrace a ‘higher moral ground agenda.’

The United Church of Christ (UCC), a vast collection of mainline Protestant Christian churches representing nearly one million parishioners across the United States, is taking precautions after receiving “credible” threats of violence against so-called “liberal churches.”

A message posted to the UCC’s website on Saturday and addressed to the denomination’s almost 5,000-strong local churches reads:

While we are hesitant to raise the alarm and/or overreact, recent events compel us to inform you about what we are hearing regarding possible threats that have come to our attention. There are reports that “liberal” churches will become targets of possible attacks in the coming week, with the dates of Jan. 17 and Jan. 20 featured more prominently. We strongly encourage you to be attendant to all safety concerns for ministers and congregants, even if it means meeting in a way that is other than in person at a church building this week.

“We posted this statement after credible threats against government buildings and liberal institutions were received by a couple of Conference Ministers and one of our ecumenical partners,” the UCC goes on to note. “Mainline churches are among the entities that have been identified by law enforcement as potential targets.”

The Matthew Shepard and James Byrd, Jr. Hate Crimes Prevention Act of 2009, which is codified at 18 U.S.C. § 249, makes it a federal crime to willfully cause bodily injury, or attempt to do so using a dangerous weapon, because of the victim’s actual or perceived race, color, religion, or national origin. The Shepard-Byrd Act, named after a gay man who was beaten to death while he was tied to a fence outside of Laramie, Wyoming, and a Black man who was lynched by being dragged from the bumper of a car in Jasper, Texas, also prohibits crimes committed because of the actual or perceived religion, national origin, gender, sexual orientation, gender identity, or disability of any person if the crime also affected interstate commerce.

The Damage to Religious Property and Church Arson Prevention Act, codified at 18 U.S.C. § 247, makes it a federal crime to deface, damage, or destroy religious real property because of the religious nature of the property if the crime affects interstate commerce, or because of the race, color, or ethnic characteristics of the people associated with the property.

Additional federal laws which protect worshipers include: (1) prohibitions that make it a crime “to use, or threaten to use force” against someone because of their religion; and (2) prohibitions against any effort “to conspire to injure, threaten, or intimidate a person” attempting to exercise religious freedom under the First Amendment.

“Erring on the side of caution and noting the previous attacks on our churches in the West and, in recent weeks, against like-minded churches in D.C., we decided to ask our congregations to be extra vigilant going into inauguration week,” the UCC’s statement continues. “We do not want to cause undue alarm, but if the threats prove credible, silence would be difficult to reconcile. Let us hold ourselves and our churches in prayer.”

In recent days, UCC leaders from Washington and Texas have spoken out against the pro-Trump mob which ransacked the U.S. Capitol Complex on Jan. 6.

The Jan. 6 attack on the U.S. Capitol has stoked cries for unity. However, there is a difference between being unified as American citizens and being one as citizens of the kingdom of heaven, which Martin Luther King, Jr. called the beloved community — the creation of which, he said, “will require a qualitative change in our souls, as well as a quantitative change in our lives.”

Jesus’ prayer wasn’t concerned with the preservation of normalcy and acquiescence to that status quo; it yearned for the culmination of God’s peaceable kingdom, where all of creation is bonded unto itself by faith, hope and love. That vision — of faith in a world where all people are in right relationship with one another, of hope in a society steered and strengthened by compassionate neighborliness and humble servanthood, and of love for all people, no matter who they are or where they come from — asks for more than passive peace. It asks that we change.

The UCC is considered among the “most accepting” Christian groups of LGBTQ individuals, thus putting its beliefs at odds with more conservative denominations.  It engaged in litigation to allow same-sex marriage in Tennessee.  It also joins most Christian groups to oppose the death penalty.