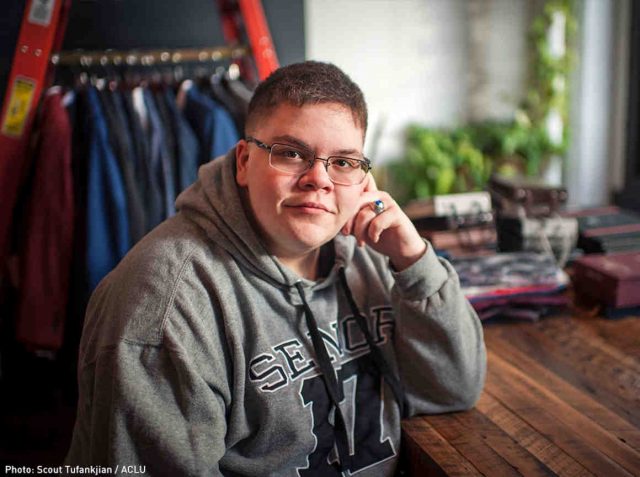 As the Gavin Grimm case heads to oral arguments, some of the amici curiae (“friends of the court” who file briefs in support of one side or another) tried to get cute with the U.S. Supreme Court. And it didn’t work.

Briefs filed by conservative groups like Liberty Counsel, the National Organization for Marriage, and the Center for Constitutional Jurisprudence argue against Grimm’s right to use the men’s bathroom, and against an interpretation of Title IX that would require schools to recognize students’ gender identity for bathroom and locker room purposes. To underscore their position that Gavin Grimm isn’t really a boy, the amici identified the case caption as follows (emphasis mine)

G.G., BY HER NEXT FRIEND AND MOTHER, DEIRDRE GRIMM

The Supreme Court, and all lower court filings caption the case this way:

G.G., BY HIS NEXT FRIEND AND MOTHER, DEIRDRE GRIMM

Slate writer Mark Joseph Stern picked up on the inconsistency and telephoned the SCOTUS press office to ask what it thought of the change. SCOTUS was not pleased. The Court’s rules for case-captioning require any filing to “bear on its cover … the caption of the case as appropriate in this Court.” Turns out, calling Gavin Grimm “her” isn’t so appropriate. SCOTUS clerk Scott Harris immediately sent letters to attorneys for Center for Constitutional Jurisprudence and Liberty Counsel reprimanding them for their error and asking that they, “please ensure careful compliance with this requirement in this and other cases in the future.”

Those hell-bent on de-legitimizing the gender identities of transgendered people will surely complain that SCOTUS’ preference for pronouns is just the kind of snowflake mentality that Neil Gorsuch will surely put to an end. But anyone actually familiar with federal courts knows that they can be sticklers for correctness. And in fact, this isn’t about political correctness, but about actual correctness.  Whether or not the folks over at Liberty Counsel think Gavin Grimm is a boy or a girl, the official case filing uses masculine pronouns. It sure isn’t up to a non-party to make a change.

Let’s face it: these amici didn’t accidentally change the case caption. They did it purposefully and with specific and significant meaning. Briefs that are filed with the Supreme Court are read and re-read, proofed and re-proofed. And if there’s any group of words guaranteed to undergo scrutiny for font size, spelling, and spacing, it’s the case name. Using a feminine pronoun to describe the subject child of the proceeding wasn’t an oversight – it was a deliberate message to the Court that the writers refuse to acknowledge Gavin Grimm as a boy.

I have no problem with Liberty Counsel’s lawyers, or any other lawyers, weaving their legal arguments in to all that they do. Detailed and pervasive advocacy is the job of any good lawyer. However, rules are rules. Lawyers for Gavin Grimm couldn’t exceed the page limit on their filings just because they really, really thought they should win. Litigants can’t use red lettering on their briefs to draw attention to the parts they think are most credible. And amici cannot change the case name to suit their purposes. Their attempt to do so is not only incorrect and uninformed, but it is flat-out disrespectful to the Supreme Court (not to mention the seventeen year-old child the case involves). These groups’ willingness to flout court rules are a microcosm of the larger issue in the Grimm case. Many of those who refuse to recognize gender identity prioritize their bigotry over all else – even rules and laws.

The raging debate over bathroom usage is as much about fact as it is about fiction. So was the case when Jim Crow segregated bathrooms to “protect white people from disease,” and when homophobes warned that gay men would spread AIDS by molesting boys in bathrooms. While there are complex questions in need of answers with regard to the rights of transgender people, there is no place in that analysis for the arguments of those who disrespect the process itself. If SCOTUS is to weigh in on transgender rights, it cannot be subject to the nuisance of propagandists who believe rules do not apply to them. With one misused pronoun — just three small letters– these amici have proven that their bigotry outweighs their respect, their obligations, and their credibility.