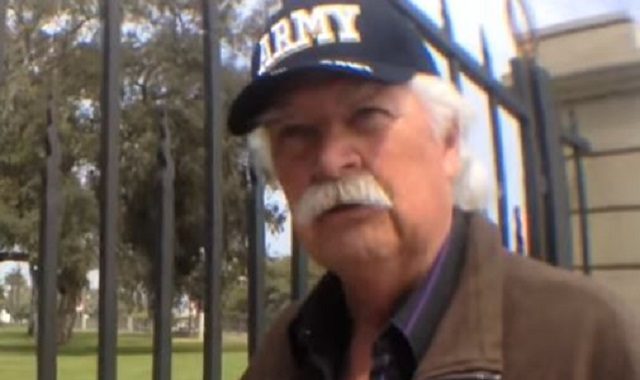 Robert Rosebrock is a 74-year-old U.S. military veteran who has his share of grievances with the Department of Veterans Affairs. Not least of them is the fact that VA Police arrested him for placing two small American flags on the fence of Los Angeles National Veterans Park, and taking photos.

Rosebrock and others have been demonstrating against the VA there nearly every Sunday and Memorial Day since 2008, according to court documents. They are upset that the large area of federal land that the VA controls is not used to care for veterans, but for other facilities, including a UCLA baseball stadium, a school, a theater, and laundry facilities for a hotel. Two of those demonstrations from last year stand out, however, because they resulted in Rosebrock getting arrested, leading to an upcoming trial.

The first incident, in May, occurred after another protester was handcuffed from displaying an American flag on the fence. Rosebrock took pictures of what was going on, and found himself getting arrested and charged for unauthorized photos of a VA Police officer, which is apparently a thing. The other protester? He was let go without charges.

The second incident took place the following month, when Rosebrock had placed two napkin-sized American flags on the fence. A VA officer cited him for placing the flags on the property, and for again taking pictures of the police activity.

Rosebrock, who is now being represented by the watchdog organization Judicial Watch, claims that he and others have been placing flags — larger than the ones he got in trouble for — on the fence for years. The officer cited him under a statute prohibiting placing placards or posted materials, that his attorneys claim are too vague. The law doesn’t mention flags, and the items expressly prohibited under the law (18 C.F.R. 1.28(a)(9)) are printed materials like pamphlets and flyers. Rosebrock says in court documents that years ago an officer said flags were allowed. He also acknowledges that he’s been cited for violating the statute by displaying flags in the past, but that the charges were always dismissed.

As far as the charges for taking photos, there is a statute prohibiting unauthorized photographs and video for advertising or commercial purposes without written consent, or for news purposes outside of designated areas. The arresting officer wrote in his report that he recognized Rosebrock as someone who takes photos of the area that end up in news articles.

Indeed Rosebrock admittedly writes articles for various publications as a contributor, but in his motion to dismiss, he insists that he is not a news reporter, and “does not write about ‘the news,'” he just engages in advocacy for issues about which he is passionate.

Regardless of the merits of the case, Judicial Watch believes that prosecuting Rosebrock is uncalled for. “No public good can be served by prosecuting a 74-year-old veteran over the placement of two small American Flags at the entrance to a park honoring veterans on Memorial Day,” Judicial Watch President Tom Fitton said in a statement obtained by LawNewz.com. The organization is calling on the Justice Department to call off the case.

A hearing is scheduled for March 7 for Rosebrock’s motions to dismiss the charges.