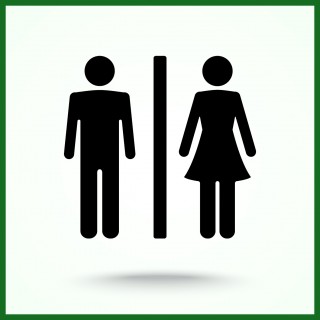 For any apocalyptics looking for a sign of the end of days, this is it.

On Wednesday, eleven states filed a lawsuit against the federal government, alleging that the recent guidance to school districts about bathroom use violates Title IX of the Civil Rights Act.

As much as this lawsuit is a flagrantly irresponsible waste of taxpayer funds, I would love to see it get to Ruth Bader Ginsburg’s desk, so she could unceremoniously shove it up the asses of the bigoted governors named as plaintiffs. It’s bad enough that nearly a quarter of our states simply cannot handle the idea of following federal law. But it’s abhorrent for anyone to use the Civil Rights Act as a means of justifying bigotry against a minority group.

The Civil Rights Act of 1964 sought to rectify decades of discrimination against black Americans. The road to passing the act was a hard-fought battle, rooted in opposition to backward and often violent practices in the American South.   In a funny-not-funny coincidence, one major source of recurring discrimination against blacks had been the legalized segregation of bathrooms. Ultimately, the passage of the Civil Rights Act was a triumph of justice, for which Americans have long been rightfully proud. The idea of using this law to justify the very discrimination it was drafted to end spits in the face of those who fought for its passage.

The plaintiff-governors sacrificed their scraps of integrity by feigning ignorance of the long legal history of bathroom bigotry. Apparently, there is just something about bathrooms that captivates The American Bigot. In the Jim Crow era, Segregationists warned of the terrifying dangers of mixing races in bathrooms. White women, they argued, would surely catch venereal diseases from black women.   Blacks, as a people, were sexual deviants – and the public bathroom was the only refuge for innocent white women in an integrated world. Sound familiar?

Five decades later, the protectionist veneer has worn off to reveal a core of race-based extremism; we now see laws separating races in bathrooms for what they always were – repulsive signs of backward thinking by an ignorant and repressed society. After racial integration became the norm, bathrooms continued to be a favorite meeting place of regressive thinkers. During the 1970s, the slippery-slope brigade warned that granting women equal rights would necessarily require mixed-gender bathrooms. That, they warned, would mean be the end of our civilized society; sexual violence against women and children would go unchecked in a new, gender-neutral world. Sigh.

When the world failed to end as a result of women wearing pants and using the title “Ms.”, LGBs took their turn as the center-stage target of hatred.   In the 80s and 90s, garden-variety biblical-brand homophobia found its soul mate in the AIDS epidemic and modern segregation was born. It wasn’t long before the LGB discrimination found its way into the toilet. “Gay men are all perverts who will molest our boys in the bathrooms!” cried the angry mob.  “Think of the children!” went the call to action.

But then people got used to Ellen DeGeneres, and laughed at Will & Grace, and hating on gays wasn’t as stylish as it once had been. And when presidents, senators, and courts started reminding us that ostracizing gays and lesbians was pronounced, “illegal discrimination,” it was time for the haters to pick a new target.

Which brings us to now. Transgender people are the perfect target of 2016-style discrimination, possessing all the best characteristics: it includes a relatively small minority; it’s confusing and unfamiliar; and best of all, it is closely-tied to genitalia.  Plus, it’s very efficient for politicians to piggyback their aspirations onto transphobia; conveniently, the voters who support this bathroom nonsense are the same people who opposed same-sex marriage.  And that issue is a tried-and-true election winner.  An angry mob of homophobes became a solution in search of a problem, and their elected leaders were happy to point them in the direction of transgender high schoolers.

Modern haters are determined to do things bigger and better than ever before. The Jim Crow South may have passed local train-car and lunch-counter segregation laws. But this group will take on the entire federal government. They will threaten to impeach the president, override federal directives, and reinvent federal statutes for their own extremist use.

And a damn Title IX lawsuit?

Give me a break. Title IX is the part of the Civil Rights Act included to protect women from gender-based discrimination. It’s what forces colleges to give scholarship funds to female athletes and what gives people federal protection from sexual harassment. In recent years, collegiate rape victims have used Title IX as a basis for suing universities that fail to create a safe campus environment.

Title IX is pretty clear in its purpose:

“No person in the United States shall, on the basis of sex, be excluded from participation in, be denied the benefits of, or be subjected to discrimination under any education program or activity receiving Federal financial assistance.”

It actually sounds like a great statute under which the transgender students who are the victims of discrimination could sue, doesn’t it?

In a feat of interpretive acrobatics that could only be accomplished by Southern governors, Title IX is now being twisted to create a cause of action for the oppressors. They are being denied their gender-based rights. They are the victims. Kafka is apparently alive and well out in Texas.

No reasonable reading of Title IX gives state governors the right to use it as a basis for violating a federal non-discrimination directive. The fact that discrimination against transgender people differs from other kinds of discrimination is irrelevant; this law is a shield, not a sword.

Is it possible that this lawsuit isn’t motivated by bigotry, and the federal directive is simply impractical to follow?

The federal directive doesn’t require school districts to build new bathrooms, or change their existing bathrooms. It just requires districts to allow students to use the bathroom with which they feel most comfortable. Nothing about letting a transgender boy (born a girl, now looks like a boy) pee in a stall in the boys’ room “wreaks havoc on our schools,” as Jeff Landry, the attorney general for Louisiana warns. The argument, “we can’t stop discriminating, because it’s too much trouble” was wrong in Brown v. Board of Education of Topeka (when people wanted to keep blacks out of white schools), and was wrong in United States v. Virginia, (when people insisted that letting women into the Citadel would be cataclysmic); it is wrong now.

Good people of Texas, Alabama, Wisconsin, West Virginia, Tennessee, Arizona, Maine, Oklahoma, Louisiana, Utah, and Georgia: wake up. You’re being used. Your government has been hijacked. Your own citizens are being sacrificed in the name of “states rights” and “public safety.” Discrimination against any group is despicable; but something even more sinister is at work here.

Our political leaders should be setting examples to our citizens. They should be leading the charge for justice, and using their influence to encourage equality. Most of all, they should be using our money to make the world better—not to rile up a base of bigoted constituents to start some pointless trouble with our own federal government. They don’t care about schools or public safety. They probably don’t even care all that much about displacing transgenders; they care about their own re-election. Rallying people in hatred against minorities is always a tantalizing campaign strategy. Throwing in some “Obama ain’t gonna force us to do nothing,” is too tempting for these vultures to resist.  Really, though, people.  We can do a lot better.