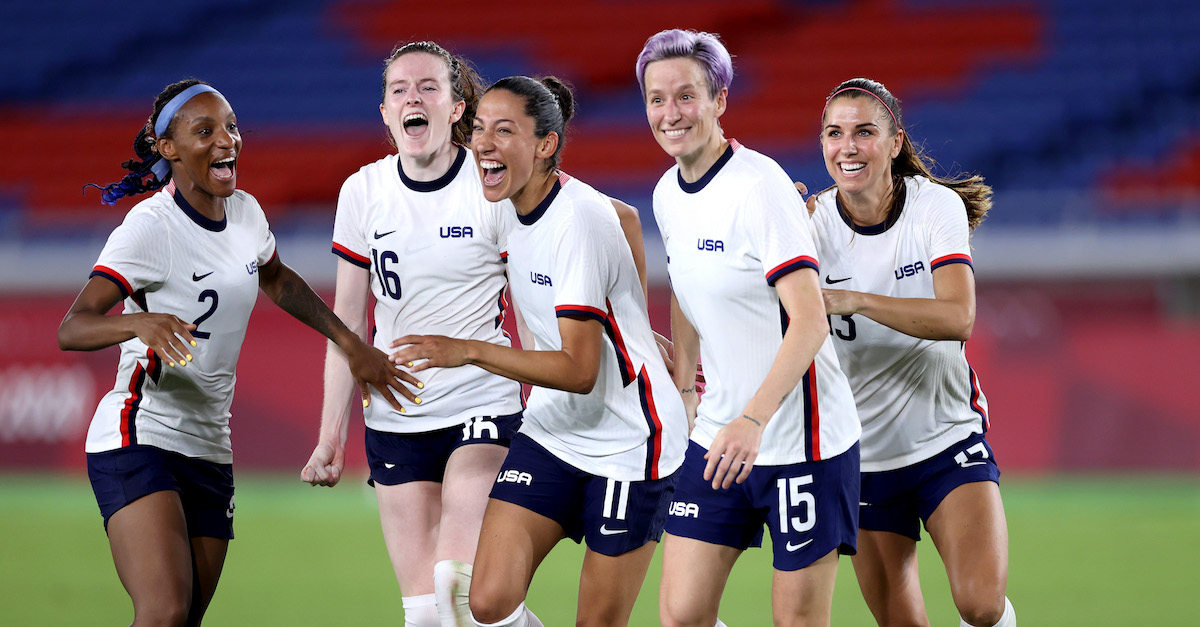 The men’s U.S. soccer labor union has weighed in on the dispute between members of the women’s team and the U.S. Soccer Federation, and the men’s position is unequivocal: U.S. Soccer has discriminated against the U.S. Women’s National Team for decades, and equal pay is long overdue.

In a strongly-worded amicus brief filed in the Ninth Circuit Court of Appeals on Friday, the United States National Soccer Team Players Association (USNSTPA) sided with the women players, who have appealed a lower court’s decision dismissing their pay discrimination case.

The USNSTPA is the labor organization for current and former members of the men’s national soccer team. An amicus brief, also known as a “friend of the court” brief, is filed by a non-party with an interest in the case with the intent of influencing the court’s decision.

The men’s amicus brief was filed Friday, one week after litigants from the women’s team—including superstars Megan Rapinoe, Alex Morgan, Becky Sauerbrunn, and Carli Lloyd, and Christen Press—filed an appellate brief. From the start, it was clear whose side the men were taking.

In its statement of interest in the case, the USNSTPA said that it has a “keen understanding of the Federation’s long-standing discrimination against the Women’s National Team and its players.”

“The Association has a strong interest in ensuring equal and fair compensation for the elite athletes, male and female, who represent the United States in international soccer competition,” the brief continued, adding that the “men stand with the women in their fight to secure the equal pay they deserve.”

The brief itself opens with an unequivocal assertion that U.S. Soccer has spent decades discriminating against the women players, despite top-level performances from the women’s teams.

The United States Soccer Federation markets the United States Men’s and Women’s National Teams under the slogan, “One Nation. One Team.” But for more than thirty years, the Federation has treated the Women’s National Team players as second-class citizens, discriminating against the women in their wages and working conditions and paying them less than the Men’s National Team players, even as U.S. Soccer has enjoyed a period of extraordinary financial growth. The Federation has never offered or provided equal pay to the women, and the district court’s holding to the contrary cannot be squared with the facts.

The members of the Women’s National Team are elite athletes who have dedicated their lives to establish the Team as a force of unparalleled dominance on the international soccer stage. But rather than rewarding the women’s effort and success with equal compensation, the Federation has spent more than three decades treating the women as an afterthought, discriminating against them through inferior wages and working conditions, and forcing the women to struggle for the equal pay and fair treatment they deserve.

The USNSTPA criticizes the reasoning of judge R. Gary Klausner, of the U.S. District Court for the Central District of California, who dismissed the women’s equal pay claims in May 2020. In his ruling, Klausner essentially bought U.S. Soccer’s argument that it had actually paid the women players more during the years considered in the lawsuit.

However, U.S. Soccer made this calculation comparing bonus money that went to the women’s team, that had won the World Cup, while the men hadn’t even qualified that year—a calculation that the men’s amicus brief strongly criticized.

“[T]he women only managed to get the same total per game pay by having extraordinary success on the field, while the years relied on by the district court were the first time the men did not qualify for the World Cup in more than thirty years,” the men’s brief said (emphasis in original), calling the judge’s math “oversimplified.”

“A woman’s rate of pay is not equal to a man’s if the woman must consistently achieve better outcomes merely to get to the same place. If the women had won fewer games, or if the district court had analyzed a more representative period of the men’s performance as a point of comparison, the per-game disparity would have been obvious, glaring, and undeniable.”

The brief also said the lower court’s reasoning was “further flawed” because it compared the women’s pay under the 2017 agreement to the men’s pay in their 2011-2018 agreement, which was made “in the shadow of the financial crisis.” Citing a recovering economy and increased sponsorship interest in both the men’s and women’s team, “true equality should have led to the women in 2017 being paid more than the men were paid under their 2011 agreement.”

In fact, according to the brief, the men were “stunned” to learn that U.S. Soccer hadn’t agreed to pay the women more than what the men had negotiated in 2011, saying that, given the Federation’s “dramatically improved financial circumstances, the women were due at least triple the compensation provided for in the men’s agreement.”

According to the men’s brief, U.S. Soccer financial records showed $28 million in annual combined cash revenue from games, sponsorship, television, and licensing revenue associated with both the men’s and women’s teams, along with $50 million in net assets. By the time U.S. Soccer negotiated its agreement with the women, it had over $100 million in annual combined cash revenue, and $168 million in net assets. The men cited growing interest in the women’s team as accounting for a “significant portion” of the increased revenue and assets.

The men’s team is currently in contract negotiations with U.S. Soccer, and, in the brief, criticized the Federation for unfairly lowering wages of both men and women players.

“As the governing body for soccer in the United States, the Federation has complete control over which athletes will be permitted to represent the United States at the international level—and over the terms of their compensation,” the men’s brief says. “This places enormous pressure on National Team players to accept the Federation’s offers in collective bargaining, even if unfair or unequal. The Federation has consistently used that advantage to place National Team players—male and female—in an untenable bargaining position and depress their wages.”

Klausner did not dismiss the women’s teams claims of unequal working conditions, which settled in December 2020.

The women’s lawsuit dates back to 2016, when five players filed a wage discrimination complaint with the Equal Employment Opportunity Commission.

U.S. Soccer has until Sept. 22 to respond to the women’s appellate brief.

Read both the women’s appellate brief and the men’s amicus brief, below.