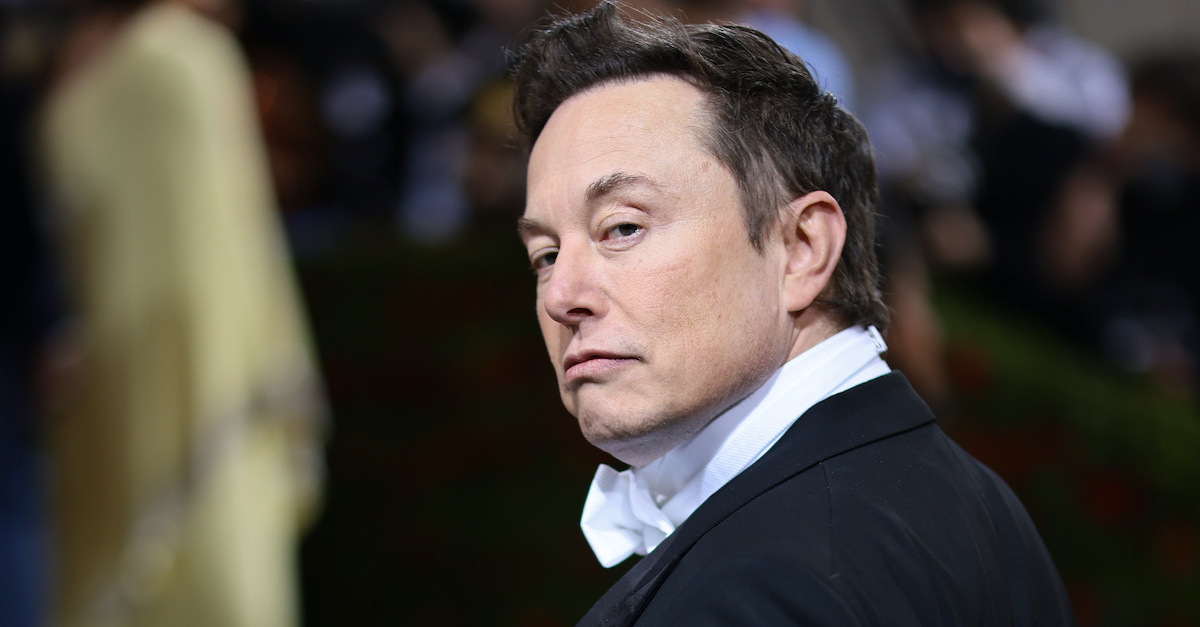 Elon Musk attends The 2022 Met Gala Celebrating “In America: An Anthology of Fashion” at The Metropolitan Museum of Art on May 2, 2022 in New York City.

Twitter will not seek releases from its remaining employees until at least the first week of December, according to an agreement in a class-action lawsuit by workers who say owner Elon Musk violated federal and state law in a recent spate of company-wide mass layoffs.

The order came Friday in the form of a docket entry which said that Twitter had agreed, via stipulation, not to ask employees to sign documents that would release Twitter from certain legal claims pending an order from the court.

“The parties’ proposed briefing schedule on the protective order motion, Dkt. No. 14, is adopted with the understanding that Twitter will not seek employee releases pending further order,” the docket said. “A hearing is set for December 8, 2022, at 3:00 p.m.”

As Law&Crime previously reported, a group of Twitter employees have sued the company on Nov. 4 in a class action complaint over the way it allegedly notified workers that they were being laid off. The employees say that Twitter failed to follow both state and federal Worker Adjustment and Retraining Notification (WARN) Acts that require employers to give 60 days’ notice to employees before “plant closings” or “mass layoffs.

Friday’s order stems from the plaintiffs’ Nov. 9 emergency motion for a protective order that would “prevent Defendant Twitter, Inc. from seeking releases from employees it is laying off without notifying them of the pendency of this lawsuit, the claims brought here on their behalf, and contact information for Plaintiffs’ counsel.” The motion alleges that earlier in 2022, Tesla engaged in mass layoffs in violation of the state and federal WARN Acts and a federal court issued a similar protective order after finding that Tesla’s conduct was “misleading.”

The day after filing the protective order request, the plaintiffs moved to expedite the hearing on the motion. Days later, on Nov. 14 — with no response from Twitter having been filed, according to the federal docket — Donato ordered the social media company to respond by Nov. 21.

On Wednesday, Nov. 16, the parties filed a stipulation indicating that they had worked out an agreement on how to proceed on the protective motion.

“Due to the significant interests and expectations of the employees impacted by the reduction in force, and Twitter’s desire to minimize the impacted employees’ continued uncertainty regarding the severance they will be offered, Twitter is agreeable to have Plaintiffs’ Motion resolved on an expedited schedule,” the stipulation says.

In substance, the parties agreed that Twitter will respond to the protective order request on Monday, Nov. 21, and the plaintiffs will have until Wednesday, Nov. 23 to comply. The parties offered Nov. 29 as a hearing date on the motion “or as otherwise convenient for the Court” during the week of Nov. 28 to Dec. 2.

“If the Court adopts the Parties’ proposed schedule in material substance, Twitter will not seek releases until after the Motion is heard and decided,” the stipulation also said.

With Friday’s docket entry, U.S. District Judge James Donato, a Barack Obama appointee, indicated that he would accept and abide by the parties’ agreed-upon briefing schedule, although by setting the hearing date for Dec. 8, the judge delayed hearing the motion by a week beyond what the parties had requested.

Donato did not issue a separate written order.

“This is the first in what we hope will be a series of victories for workers who were mistreated by Elon Musk,” plaintiffs’ attorney Shannon Liss-Riordan said in a statement. “Twitter cannot seek releases from employees until the Court has heard our arguments. This will allow more time for workers to understand their rights under the law, without being duped into signing away their rights and waiving their ability to pursue claims against Twitter for its shocking violations of worker protection laws over the last couple of weeks. Workers should not be living in fear of retaliation or further midnight ultimatums issued by Musk.”

Liss-Riordan indicated that she is ready to do legal battle with Musk, the billionaire owner of Tesla and SpaceX whose takeover of Twitter has been highly controversial.

“I look forward to representing Twitter workers in court and outlining the various ways Musk has violated their rights and failed to honor his commitments and legal obligations,” Liss-Riordan said in the statement. “No one, not even the richest man in the world, is above the law.”

Twitter, which reportedly lost most of its communications team to layoffs, did not immediately respond to Law&Crime’s emailed request for comment.

[Photo by Dimitrios Kambouris/Getty Images for The Met Museum/Vogue.]