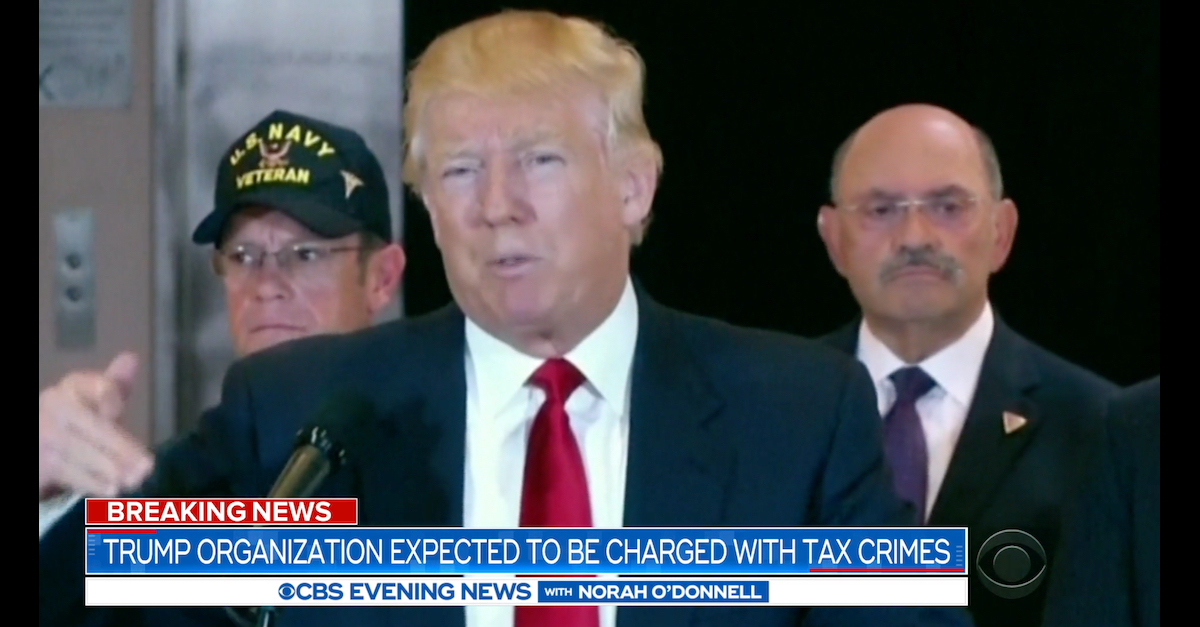 The Trump Organization’s chief financial officer and trusted lieutenant of the former president for nearly half a century reportedly surrendered to criminal authorities early on Thursday morning, marking a dramatic opening shot in a prosecution that follows a three-year investigation.

A large press scrum waited outside Manhattan Federal Court in the early morning hours in anticipation of the arrival of Allen Weisselberg, the Trump Organization’s CFO whose cooperation is widely seen as crucial to any potential prosecution of former president Donald Trump.

His charges are reportedly expected to be unsealed at 2 p.m. Eastern Time.

The Trump Organization responded in characteristic fashion, which has been on view whenever it faces government scrutiny or investigation—with a counterattack.

No information has been publicly confirmed by the Manhattan District Attorney’s office about the nature of the charges. Reported to be “tax charges” by the New York Times, the Trump Organization claims the matter simply involves “employee benefits” in a type of prosecution “neither the IRS nor any other District Attorney would ever think of bringing.”

“This is not justice; this is politics,” the statement concludes.

Manhattan District Attorney Cyrus Vance, whose political career is ending as he declined to seek reelection, has remained silent so far, at least publicly. His office began its investigation in 2018, escalating to a subpoena of the Trump Organization’s accounting firm Mazars in a battle that reached the Supreme Court, twice. Trump lost both of those fights. The first lopsided ruling in Vance’s favor established that the then-president of the United States was not absolutely immune from criminal investigation, and the second time, a Supreme Court stacked with Trump appointees declined to stay the subpoena on the grounds that was overbroad.

The CFO’s fierce loyalty to Trump is said to be legendary.

According to a lengthy profile of Vance published by the New Yorker in March, Weisselberg acted more loyal to Trump than to his then-soon-to-be daughter-in-law at a family event. Trump reportedly pulled up in his limousine to a Jewish mourning ritual known as a shiva inside Weisselberg’s home at Long Island. As Jennifer Weisselberg recalled it in the profile, Trump quickly started showing pictures of naked women on a yacht to the attendees and started hitting on her.

Weisselberg reportedly responded by humoring Trump rather than defending his then-soon-to-be daughter in law.

Jennifer Weisselberg subsequently married and divorced the CFO’s son Barry Weisselberg, according to the report.

The Times echoed those thoughts Wednesday evening. It described Weisselberg as “a man whose unflinching devotion to Mr. Trump will now be put to the test” after “nearly a half-century of service” to the former president’s business.