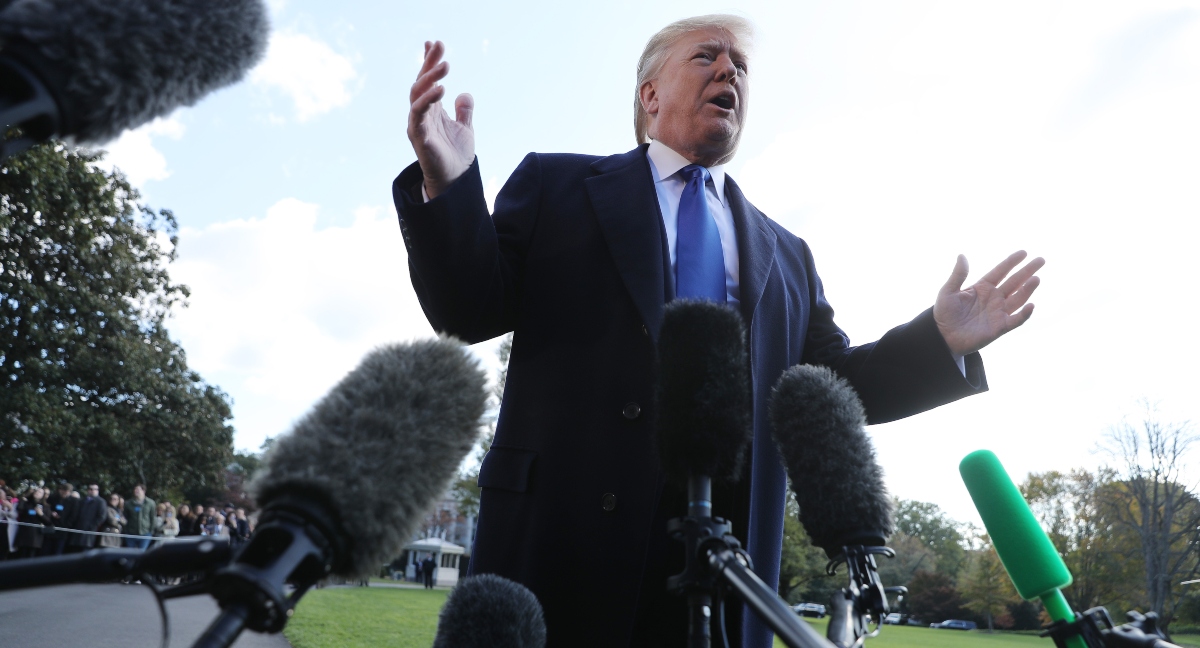 Political appointees of President Donald Trump feted themselves at the Trump International Hotel in Washington, D.C. last month–raising multiple layers of ethical concerns due to the source and destination of the money spent at the Old Post Office Pavilion-cum-gauche lodge.

According to 1100Penn, an investigative journalism newsletter dedicated to various goings-on at the 45th president’s monument to the Gilded Era, unnamed Trump picks were wined and dined at a celebration in the hotel’s presidential ballroom on November 21.

An invitation to event promised “a cocktail reception” which offered attendees the opportunity “to connect with fellow President Trump appointees and celebrate [their] continued dedication and service.”

The newsletter notes that the reception was hosted by “a non-profit funded at least in part by a dark money group and the Republican National Committee [(RNC)],” but reportedly that non-profit “has not replied to inquiries asking who paid for [the November 21] event.”

Financial records, however, clear up some of those questions.

According to publicly-accessible Federal Election Commission (FEC) filings, the RNC gifted The 45 Alliance with $75,000 in December 2018.

The purpose of that cash infusion was listed simply as a “Donation.”

The 45 Alliance is a self-described “social welfare organization” (under the tax code) which claims to have been “established to support Executive Branch appointees during your public service.”

Also filling the non-profit’s coffers is America First Priorities (AFP)–another pro-Trump non-profit which has been described by campaign finance transparency outlet Open Secrets as a political “dark money” group. Tax returns filed by AFP describe a $150,000 contribution to The 45 Alliance as “issue support” made sometime in 2018.

Burke is a fixture of the D.C. establishment and conservative movement who most recently worked on Mitt Romney‘s unnecessary presidential transition team–after a stint as White House liaison to Health and Human Services under George W. Bush.

She also served as a high-up functionary within the RNC for six years. Prior to that, Burke worked for the conservative Heritage Foundation where she developed a leadership training project created by former congressman and vice-presidential nominee Jack Kemp. Additionally, Burke is currently a board member of the American Conservative Union–the oldest right-wing lobbying organization in America.

Per 1100Penn, additional staff of The 45 Alliance include:

One of the alliance’s two listed board members is [F]ormer White House Deputy Chief of Staff and current partner at a consulting group focused on “public policy and government relations,” Rick Dearborn. Josh Pitcock, a former chief of staff for Vice President [Mike] Pence who’s now the vice president of government relations for Oracle, is the other board member mentioned.

“None of the three leaders of The 45 Alliance replied to inquiries asking about who paid for this cocktail reception and why the Trump Hotel D.C. was chosen to host it,” the newsletter continued.

The dizzying revolving doors between the White House, pro-Trump non-profits and the president’s family-owned hotel have government accountability advocates sounding the alarm bells.

“Aside from being another example of Trump profiting off the presidency, this raises a question about how Trump appointees were able to accept this gift under the government’s gift rules,” noted Citizens for Responsibility and Ethics (CREW) in Washington‘s Walter Shaub.

“Once again, President Trump is personally financially benefiting from a pro-Trump organization hosting an event at his property,” said CREW Executive Director Noah Bookbinder in a message to Law&Crime. “45 Alliance’s decision to host a reception honoring political appointees at the President’s property raises serious concerns about potential conflicts of interest and questions about whether attendees could have violated federal gift and ethics rules. When it comes to the Trump administration, people paying for access and influence is an ever present possibility.”

One of the speakers at The 45 Alliance-sponsored cocktail reception was Housing and Urban Development Secretary Ben Carson. According to an Instagram post, Carson said: “Through hard work, perseverance and a faith in God, you can live your dreams.”