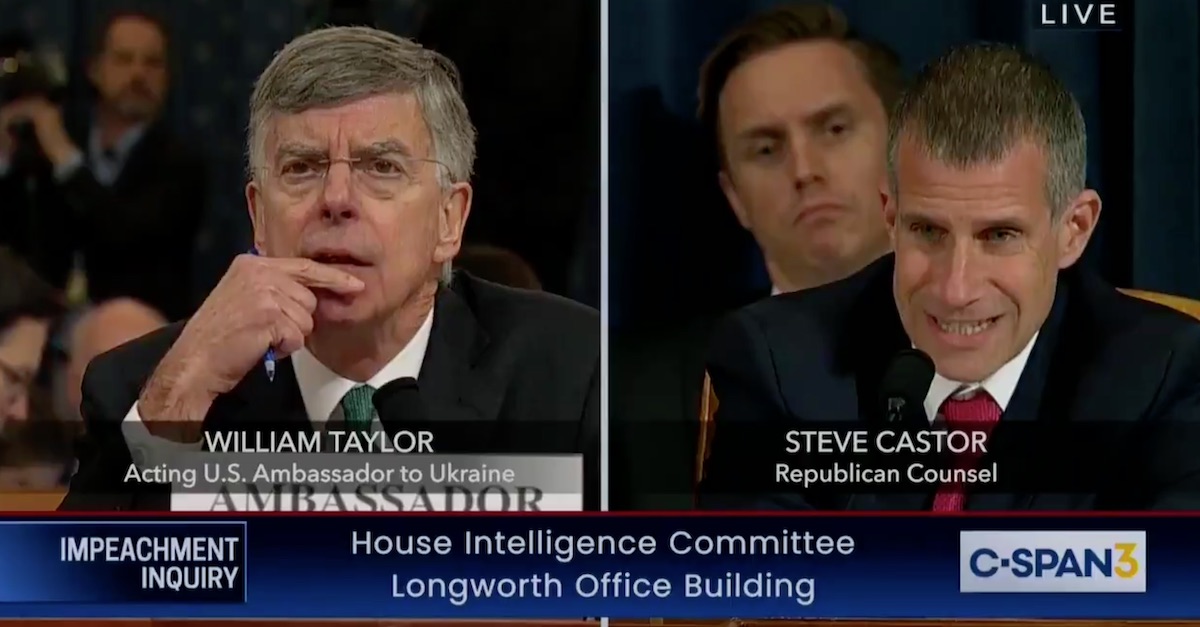 Top U.S. diplomat to Ukraine Bill Taylor at some points on Wednesday was visibly befuddled by House GOP attorney Steve Castor’s line of questioning. Taylor said in some cases that he didn’t know what Castor was asking about. The same was true for State Department official George Kent. The meandering nature of Castor’s questioning led a number of attorneys to levy sharp criticism.

Castor, during the first public impeachment hearing about President Donald Trump’s conduct, spent a significant amount of time asking about Hunter Biden and Burisma. In one instance, Castor asked Kent if he could speak to Biden’s qualifications to sit on Burisma’s board. Kent replied, “I have no idea what Hunter Biden studied at university or what his CV says.”

Castor, in another instance, successfully (?) got Taylor to admit the Rudy Giuliani-led “irregular” policy channel regarding Ukraine was outlandish, but could have been more outlandish than it was.

Bill Taylor laughed when the GOP counsel asked him if the irregular policy channel is "not as outlandish as it could be." Then concedes that it could possibly be more outlandish.

Steve Castor: "This irregular channel of diplomacy it’s not as outlandish as it could be, is that correct?”

Ambassador Taylor: "It’s not as outlandish as it could be — I agree."

Is he really the best people?

Is Steve Castor really the best lawyer the GOP could get??

Line of questioning is an implicit admission there is no defense.

What the Republican counsel’s use of much of his time on Hunter Biden and Burisma tells me, is that his members know there is no actual defense to the facts, this morning’s powerful witnesses, and the central act of abuse of office.

The goal of the Republicans on the committee is the same goal of any defense attorney when there is overwhelming evidence and no real defense: confuse and distract.

This was a “trainwreck for the GOP.”

Castor had a few minutes in which he found his footing while drawing out Kent's concerns about Burisma. Not really relevant to impeachment, but he had some momentum. But before and after, he faltered. All in all, that was a trainwreck for GOP.

What else can Castor say, really?

To be fair to him, he doesn't have much to work with. https://t.co/fLQYqBqfGR

Bro, did you even prosecute?

I don’t believe Mr. Castor is a former prosecutor. Does it show?

As Law&Crime noted before of Castor, he has largely worked behind the scenes for the House Oversight and Government Reform Committee since 2005. He was a “top attorney” during the GOP’s investigations of Benghazi and the IRS targeting scandal. He currently serves as the panel’s chief investigative counsel.

Castor has been described as a “Hidden Hand,” the “GOP’s Get-Obama Lawyer,” the Obama “White House[‘s] Bane” and a “Pit-Bull Prober.” Castor, as former federal prosecutor Daniel Goldman did for House Democrats, conducted questioning during closed-door depositions.

Castor has been praised for his institutional knowledge by former Republican lawmakers who worked with him.

“He has the longest-running institutional knowledge of most anybody on our side of the aisle. He’s been through several of these fights in the past,” former Rep. Jason Chaffetz told the Daily Beast on Tuesday. Chaffetz, who previously spent three years serving as chairman of the Oversight Committee, said Republicans could be optimistic knowing Castor is leading the charge.

“From Tom Davis to Darrell Issa to me to Jim Jordan to Trey Gowdy, he’s always had everybody’s confidence and we are an eclectic group of oversight chairs and ranking members,” he said, adding, “And the fact that he’s had all of our confidence is saying something.”

Those sentiments were echoed by the aforementioned Issa, another former Oversight chairman Castor served under with excellent results.

“He’s a very dedicated institutionalist,” Issa said. “He’s one of those people you see on the Hill that you know he could have left a long time ago and made a lot of money in any number of places.”