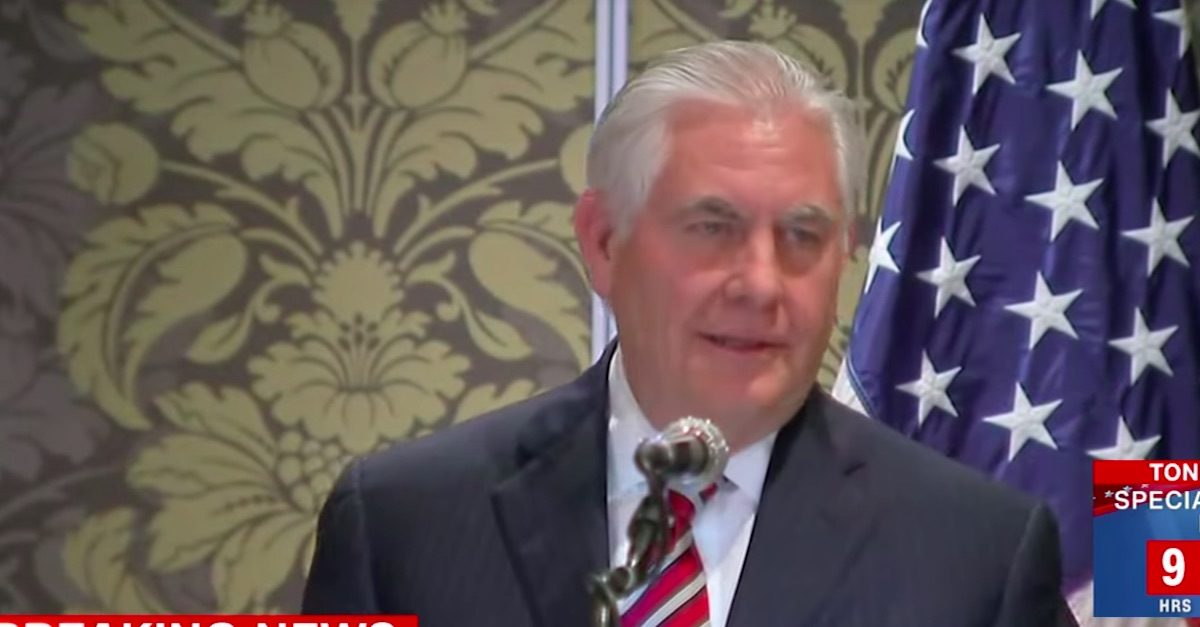 In a closed-door meeting last month, the House Foreign Affairs Committee interviewed former Secretary of State Rex Tillerson about his time as the head of the State Department. In his testimony, a transcript of which was released Thursday, Tillerson candidly recounted a number of eyebrow raising incidents and anecdotes that unfolded during the first year of the Trump presidency.

But for those who don’t have time to read the full 145-page transcript, we’ve listed five takeaways from the Tillerson interview.

Early on in the interview, Tillerson recounts an incident where he was eating dinner at a local Washington restaurant when the owner informed him that the Mexican Secretary of Foreign Affairs was also dining at the establishment, asking if Tillerson would like to say hello.

“And so, I did. I walked back,” Tillerson said, “And Mr. [Jared] Kushner, and I don’t remember who else was at the table, and the Foreign Secretary were at the table having dinner. And I could see the color go out of the face of the Foreign Secretary of Mexico as I very — I smiled big, and I said: Welcome to Washington. And I said: I don’t want to interrupt what y’all are 108 doing,” Tillerson said.

“I said: Give me a call next time you’re coming to town. And I left it at that. As it turned out later, the Foreign Secretary was operating on the assumption that everything he was talking to Mr. Kushner about had been run through the State Department and that I was fully on board with it. And he was rather shocked to find out that when he started telling me all these things that were news to me, I told him this is the first time I’m hearing of it.

Tillerson detailed another instance in which the Crown Princes of Saudi Arabia and the United Arab Emirates told Kushner and Trump advisor Steve Bannon about a secret plan to impose a blockade on U.S. ally Qatar during a private dinner. Neither Tillerson nor Secretary of Defense James Mattis were told about the planned blockade until he was asked by an interviewer.

“It makes me angry,” Mr. Tillerson said, adding, “I didn’t have a say. The State Department’s views were never expressed.”

Tillerson testified that he confronted Kushner regarding his role in foreign policy, asking him to stop making trips overseas without first consulting the State Department. Kushner promised Tillerson he would “try to do better,” but ultimately remained “in charge of his own agenda.”

Tillerson seemed careful not to insult the president, and would not address the rumor that he once referred to him as a “fucking moron,” but the description he did give was far from praise, saying he had difficulty explaining things to Trump and was often forced to dumb down complex topics.

“When we would talk about treaties…I just — I would just say I think, as a broad comment, as I characterized, you know, I think, you know, the President was on a steep learning curve around what governs certain activities,” he said.

Toward the end of the interview, a committee member asked Tillerson if he could describe Trump’s value system to the panel.

“No. I cannot,” Tillerson responded. One of his lawyers immediately stepped in to shift the conversation to a new topic for questioning.

The Trump Administration did not exactly seem pleased with Tillerson’s testimony, blaming him rather than Jared Kushner for lapses in communication.