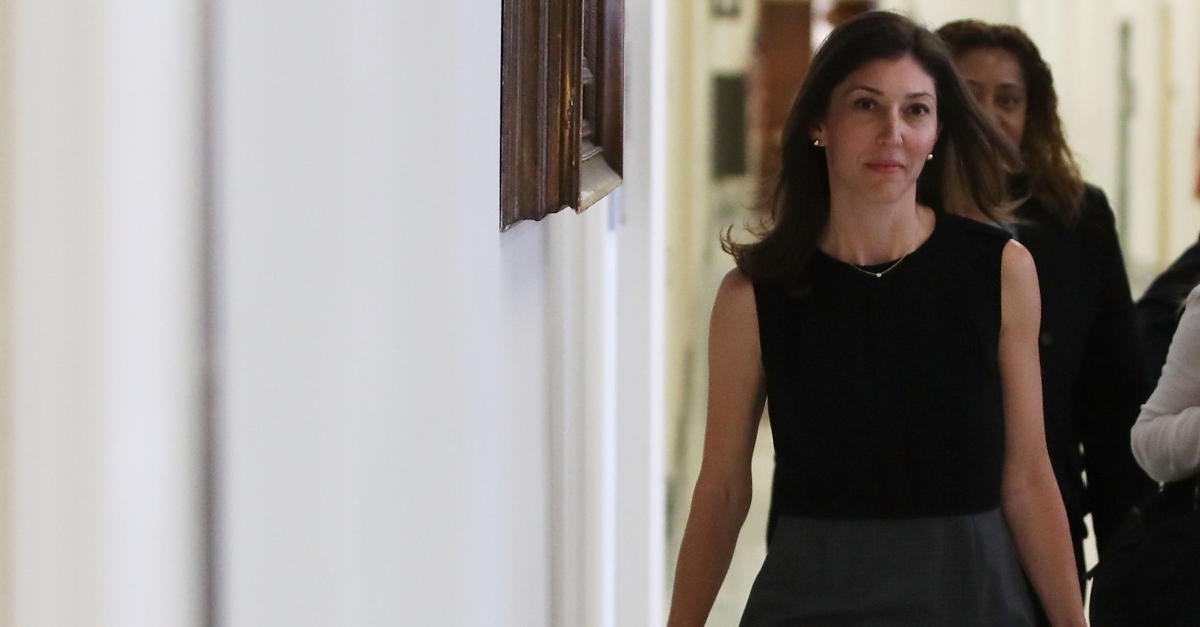 Peter Strzok and Lisa Page believe they were targeted by the Trump administration and had their lover’s walks and quarrels aired for all to see in some form of retributive humiliation. A little-known and generally unreported Nov. 18 court filing shows the Department of Justice (DOJ) claimed otherwise—that release of those infamous text messages was largely just a matter of procedure.

During a recent interview with the Daily Beast, Page alleged she was singled out to help fuel President Donald Trump’s oft-repeated charge that deep state bureaucrats were out to upend his political fortunes.

Page rubbished the tawdry nature of those messages:

Those texts were selected for their political impact. They lack a lot of context. Many of them aren’t even about him or me.

As for why, exactly, the DOJ went along with the headline-generating release and revelation of her affair with Strzok—Page lays the blame at the feet of former DOJ spokesperson Sarah Isgur Flores, who now works as a CNN political analyst.

As the report noted, according to Flores, DOJ’s Office of Inspector General (OIG) signed off on the release of the text messages so that members of Congress could inspect them—but when faced with an increasing series of leaks, some messages were provided directly to certain beat reporters.

“As we understand now, some members of the media had already received copies of the texts before that—but those disclosures were not authorized by the department,” Flores said in 2017.

As described in the OIG Report, the text messages at issue were collected as part of the OIG’s investigation into various actions by the FBI and the Department in connection with the Midyear investigation that [Strzok] led. The purpose of that investigation—consistent with the OIG’s statutory mandate to “prevent and detect fraud and abuse,” 5 U.S.C. § App. 3, § 2—was to respond to public and congressional concerns regarding the FBI’s handling of that investigation. Assuming [Strzok’s] texts were contained in an OIG system of records, the Department’s disclosure of the text messages to the public pursuant to the OIG’s routine use was consistent with that purpose by increasing public transparency into the Department’s official actions.

Essentially, the Trump administration is arguing that since the text messages were sent and stored via FBI-issued devices, they ultimately ended up on file with the DOJ’s OIG. And, because of their custodian—as well as the fact that Strzok worked on an issue of great public importance—the DOJ’s hands were tied by the Freedom of Information Act (FOIA).

Strzok, however, claims that even were the text messages between himself and Page discovered and prepared for release in line with with regular OIG procedures and FOIA, certain Privacy Act restrictions should have kept the details of his affair from ever reaching the public eye. But, according to the DOJ, that just wasn’t a possibility.

“As [Director of Office of Privacy and Civil Liberties and Acting Chief Privacy and Civil Liberties Officer Peter] Winn explains, he considered that both [Strzok] and [Page] were both high-ranking officials within the FBI, and that the text messages exhibit very strong opinions about a then-ongoing FBI investigation—an investigation in which both [Strzok] and [Page] were personally involved,” the filing notes later on—citing an accompanying affidavit filed by Winn. “The communications between [Strzok] and [Page] place, not on personal devices, but on Department-issued mobile devices, which contained clear banner warnings that inform users of the lack of any reasonable expectation of privacy.”

“While the Department permits limited personal use of its equipment, this policy does not exempt mobile devices from Department monitoring and oversight, and Department employees receive regular training and notices that any activity and content on Department is subject to being monitored. [Strzok] and [Page] knew, or should have been aware, that these texts would have been subject to review by others in the Department and possibly even the subject of a FOIA request or disclosed in connection with criminal prosecutions.”

But how did the mere existence of those messages become a matter of public concern in the first place? Enter: The New York Times.

The DOJ’s Assistant Attorney General for Legislative Affairs Stephen Boyd also submitted a declaration which explains the order of events.

“My understanding is that, at or around the time of the publication of the New York Times article, the Office of the Deputy Attorney General requested from the OIG, and the OIG provided, an initial subset of the total universe of discovered text messages between Mr. Strzok and the FBI attorney that the OIG considered particularly troubling,” Boyd’s affidavit says.

And after that, it was off to the races. Members of Congress quickly demanded to see the text messages and that was accommodated. Aforementioned media releases followed soon thereafter.

It’s an argument that’s unlikely to ring true with many critics of the usually information-and-leak-averse Trump administration but it’s the story the DOJ is going with in federal court to push back against Strzok’s various claims against Barr and DOJ.

”Even if the Court were to find that the disclosures made by the Department were not permitted under the Privacy Act, Plaintiff would not be entitled to damages because he cannot prove that the disclosure was ‘intentional or willful.’ [under] 5 U.S.C. § 552a(g)(4),” the DOJ filing states.

To hear Trump and Barr tell it: the DOJ was hamstrung by the necessity of public access and the text messages weren’t ever really in their hands to begin with. Count Page and Strzok a bit skeptical on such claims.