Things Are Getting Weird at El Chapo Trial | Law & Crime 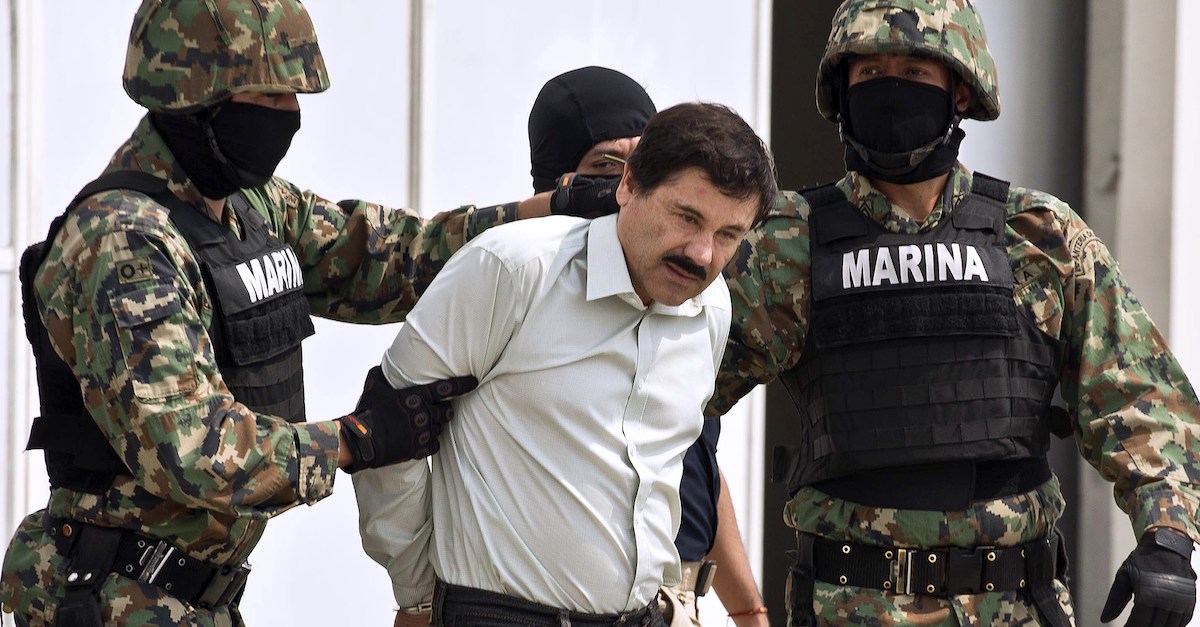 As accused Mexican drug lord Joaquin “El Chapo” Guzman Loera‘s fate hangs in the balance of a jury on the fourth day of deliberations, a couple of bizarre occurrences raised eyebrows on Thursday.

One of them happened at Brooklyn Federal Court, where a man identified as Rene Rivera Martinez showed up and claimed to be a family member of El Chapo’s. Rivera was immediately arrested and handed over to ICE.

“You cannot tell me who my family is,” Rivera was quoted by the New York Daily News.

One of El Chapo’s defense attorneys, Jeffrey Lichtman, completely distanced El Chapo from Martinez and told him who his family was not.

“The family doesn’t know him, no relation,” he said. “The family disavows him completely — he is an imposter.”

Speaking of El Chapo’s defense attorneys, the Twitter account for the law firm Balarezo Law tweeted out an image of a tequila bottle fashioned in the form of a gun.

A. Eduardo Balarezo is a Washington, D.C.-based attorney who has represented El Chapo. He hails himself on his website as a “nationally and internationally recognized” criminal defense attorney who has represented people charged with “racketeering, federal narcotics conspiracies, international narcotics distribution, homicides, [and] sex offenses.”

El Chapo’s defense team maintains that their client was the scapegoat by associates in a conspiracy, but they didn’t spend a whole lot of time presenting their own defense. He faces a life sentence if convicted on drug trafficking charges. He denies the allegations against him. El Chapo is accused of smuggling cocaine, heroin, and more into the United States. Witnesses testifying against Guzman are also facing charges of their own, and the defense has maintained that they are trying to frame Guzman to better their own situations.

The only witness Lichtman called was FBI agent John Roberts, because of what was described as sloppy note-taking. Roberts was the only defense witness, while the government had produced 56 witnesses.

Roberts was grilled about statements he made about “Colombian narco” Jorge Cifuentes, particularly the misstatement that Cifuentes received a flash drive with “sensitive information on the Sinaloa Cartel,” which was “provided to Cifuentes by a U.S. Navy officer.” Lichtman also said Jorge’s younger brother Alex Cifuentes didn’t confirm how much debt El Chapo had accrued from 2007-2013.

After that, Lichtman rested his case. All told, it took about 30 minutes.

Other eye-popping moments at trial included El Chapo’s mistress Lucero Guadalupe Sánchez López taking the stand and admitting that she moved drugs for her ex and the Sinaloa Cartel.

Sánchez, a former legislator in Mexico, previously described how she came to be in a relationship with El Chapo and how she came to be arrested for running drugs on his behalf. She was arrested in San Diego back in 2017 because police suspected she was a drug smuggler and money launderer. Sánchez pleaded guilty in October 2018 and faces 10 years to life in prison at the age of 29. She testified that she and El Chapo had a complicated relationship — one that included her being a drug runner for him.

She said there were times she moved 400 kilos of marijuana for the cartel. She also described El Chapo’s infamous “naked” escape from custody through an underground tunnel.

El Chapo is married to Emma Coronel Aispuro, and has been since 2007. Her presence in court has remained a topic of conversation throughout the trial, and she reportedly played with her hair when the “other woman” testified in court.