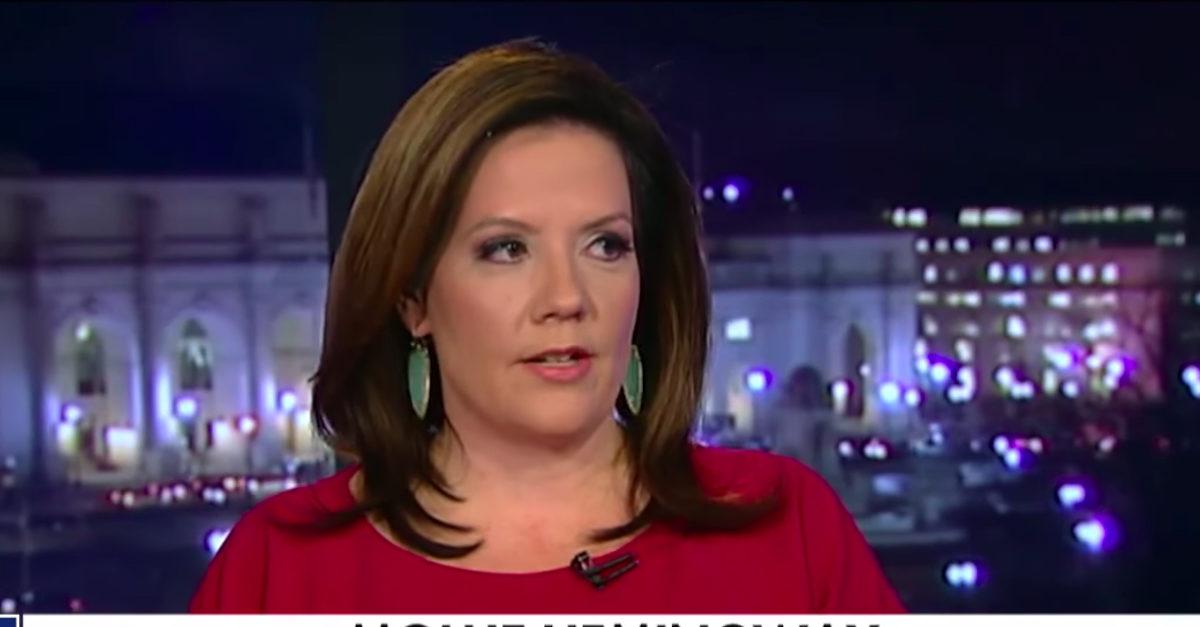 The Federalist’s senior editor Mollie Hemingway on Monday attempted to defend President Donald Trump’s talking points about the whistleblower by erroneously citing to the U.S. Constitution. While Hemingway chose to further propagate a false constitutional argument that has been increasingly echoed by conservative pundits and lawmakers in defense of the president, several legal experts were quick to point out her clear misunderstanding of the basic principles she was addressing.

In responding to a statement from Rep. Justin Amash (I-Mich.) espousing his support for protecting whistleblowers who expose government corruption, Hemingway put forth an argument devoid of substance.

“AKSHUALLY [sic] the Constitution specifically provides for the right of the accused to meet his accuser,” Hemingway tweeted. “Whistleblower protection has never — could never — mean that accusations are accepted without question. He of course must testify. To say otherwise is silly.”

It seems obvious that Hemingway, who has no formal legal experience or education, is referring to the Confrontation Clause enshrined in the Constitution’s Sixth Amendment. It also seems obvious that she didn’t read the amendment before tweeting, as it provides that “in all criminal prosecutions, the accused shall enjoy the right […] to be confronted with the witnesses against him.”

Amash, who was a practicing corporate attorney prior to joining Congress, corrected Hemingway.

“Yeah, at *trial* in a *criminal* prosecution,” Amash responded. “To say otherwise is silly. The best argument one could make is that it also should apply at trial in the Senate, despite not being a criminal prosecution, following impeachment in the House.”

Hemingway then proceeded to claim Amash himself had called for the whistleblower to testify, taking his previous statement calling for the release of the whistleblower’s complaint out of context.

“Whistleblowers are protected through anonymity,” he said. “There may be a later stage where due process for the accused means confronting the whistleblower directly. That would be at trial (though it specifically applies to criminal prosecution). That’s how our constitutional system works.”

Steve Vladeck, a constitutional law professor at the University of Texas Law School, jumped in and corrected Hemingway’s misconception.

“The Sixth Amendment literally says, ‘In all _criminal_ prosecutions, the accused shall enjoy the right … to be confronted with the witnesses against him.’ Courts have long and consistently held that _no_ other legal proceedings trigger that clause,” he tweeted.“But what do I know?”

“See, the House’s impeachment vote isn’t a ‘criminal prosecution.’ The House has the ‘sole power of impeachment,’ which is language that SCOTUS has said, in other contexts, gives Congress unreviewable discretion as to how to run the proceeding,” he explained. “Moreover, even if impeachment is ‘criminal’ in nature, the House’s impeachment power is preliminary and pre-trial; it’s the Senate that holds what is comparable to a criminal trial. The House is holding what is analogous to a grand jury proceeding or preliminary hearing.”

Attorney Mark Zaid, who is part of the legal team representing the whistleblower, saw Hemingway’s remarks and denounced them.

“It is a sad state of American affairs that so many people do not understand #whistleblower laws or policies,” he wrote. “Please do not allow ideological demagogues to distort reality with their fantasy application of how they prefer the system to be.”

Kentucky Sen. Rand Paul (R), who yesterday called for the press to print the name of the whistleblower despite laws protecting their anonymity, repeated Hemingway’s bogus constitutional argument Tuesday.

Question: "Your colleagues, Republicans, say that it's irresponsible and dangerous for your call to out the whistleblower."