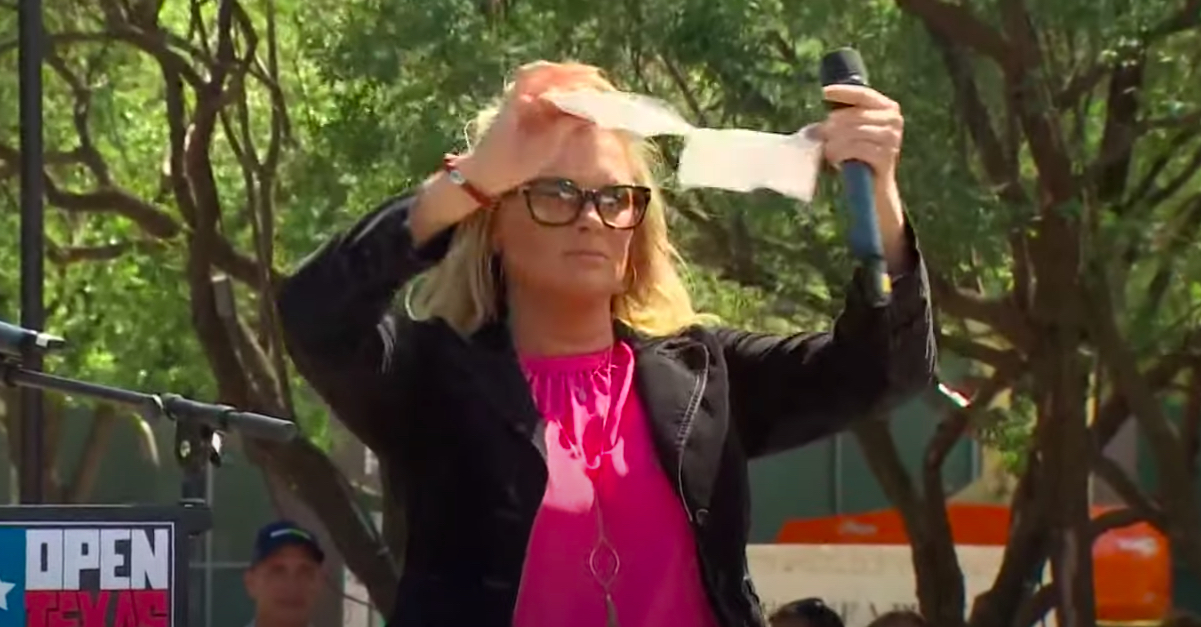 Shelley Luther tears up a cease and desist order during a protest against Texas pandemic restrictions.

The Texas Supreme Court on Thursday ordered the release of a salon owner who was jailed after refusing to shut down her business in accordance with the state’s emergency health order to prevent the spread of the COVID-19 coronavirus.

The court ordered Shelley Luther to be released on personal bond – meaning, no money was required – as all nine of the Justices consider a legal challenge to her incarceration.

Luther was arrested by Dallas County police this week after flouting Gov. Greg Abbott’s executive order directing all “non-essential” businesses to remain closed. Luther kept her salon opened to customers and was not shy about her defiance, even going so far as to tear up a cease and desist letter in front of TV cameras during a protest of the emergency measures.

A Dallas County judge later found Luther in contempt of court and sentenced her to one week in jail after she refused to issue an apology to the elected officials she offended.

The Supreme Court’s order immediately followed Gov. Abbott amending his executive order on Thursday to eliminate confinement as a punishment for violations of social distancing measures and business closures.

See the statements from @TXAG and me on the jailing of Dallas Salon Owner Shelley Luther. pic.twitter.com/wyOOllGXgj

Texas Attorney General Ken Paxton on Wednesday also issued a statement saying he found it “outrageous and out of touch” that a judge would order someone jailed for “an attempt to put food on her family’s table.”

“The trial judge did not need to lock up Shelley Luther. His order is a shameful abuse of judicial discretion, which seems like another political stunt in Dallas.”

However, it should be noted that Luther was jailed for being found in contempt of court, not for violating Abbott’s executive order.

Abbott’s updated order was issued the same day he was scheduled to travel to Washington to meet with President Donald Trump about reopening the state.

There have been more than 34,000 confirmed cases of COVID-19 in Texas and nearly 1,000 deaths as of Thursday morning.

Supreme Court of Texas Orde… by Law&Crime on Scribd