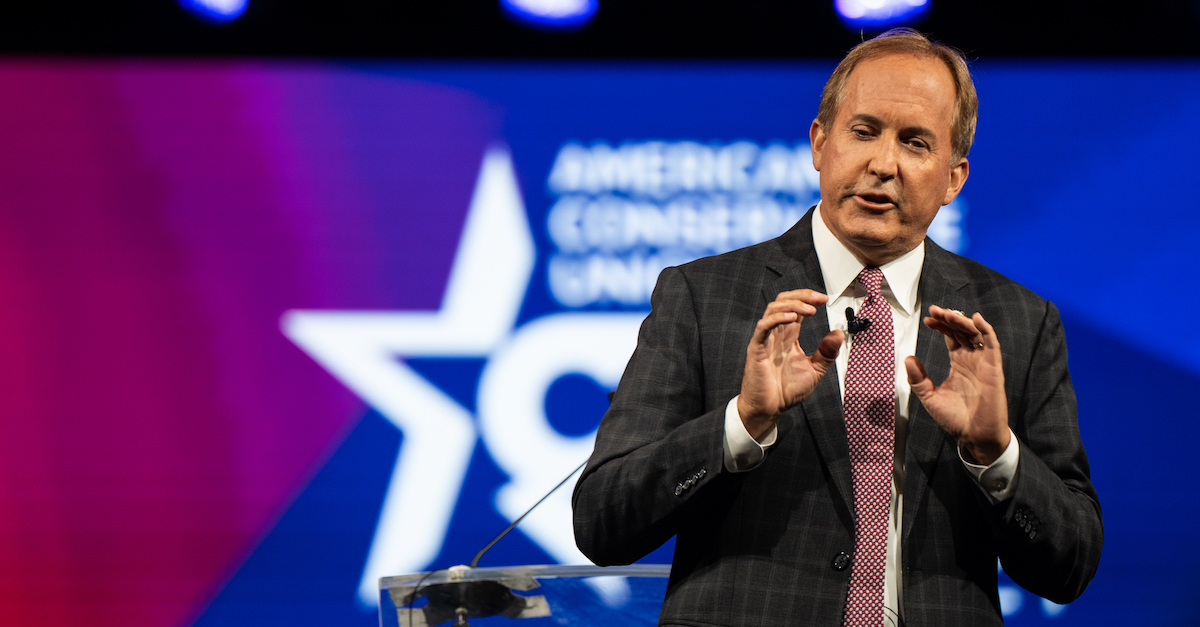 The State Bar of Texas has agreed to investigate an ethics complaint filed against Texas Attorney General Ken Paxton (R).

In a letter, the Office of Chief Disciplinary Counsel of the State Bar of Texas told complainant Gershon Gary Ratner, co-founder of Lawyers Defending American Democracy, that his late July ethics complaint–filed along with 15 other Lone Star State attorneys–contained facts alleging that Paxton had engaged in professional misconduct.

The letter notes that the Republican attorney general will, as part of the formal process, be provided a copy of the 31-page complaint, be “directed to file a response, and provide [Ratner] a copy of the response within thirty (30) days of receiving notice of the Complaint.”

The State Bar of Texas communication, however, does not contain any details about the nature of the complaint. The legal credentialing organization typically treats the complaint process as confidential until the end. The communication, obtained by Law&Crime, simply notes that the Bar has accepted the complaint is moving forward by alerting Paxton to the process and demanding his response.

“After receipt of the lawyer’s written response, the Office of the Chief Disciplinary Counsel shall investigate the Complaint to determine whether there is Just Cause to believe that the lawyer has committed Professional Misconduct or suffers from a Disability,” says the letter to Ratner from Office of Chief Disciplinary Counsel Deputy Counsel for Administration Royce LeMoine.

The letter also says the complainant will be “notified in writing of further proceedings” related to the Paxton grievance.

While the confirmation letter from the organization does not refer to the details of the allegations against Paxton, Ratner’s original complaint is focused on the conservative attorney general’s failed efforts at the Supreme Court to overturn the 2020 presidential election results in four states.

“The lawsuit that Mr. Paxton asked the Supreme Court to entertain was against Pennsylvania, Georgia, Michigan and Wisconsin,” the filing notes. “Former Vice President Joseph Biden had won the popular vote in the November election over then-president Donald Trump in all four of these states, and their electoral votes provided the critical margin of victory. Mr. Paxton’s lawsuit urged the Court to enjoin these four States from using the results of their presidential elections to appoint electors and, instead, to have the states’ legislatures appoint new electors to replace any electors the states had already appointed or to appoint no electors at all.”

The coalition of attorneys, including four previous State Bar of Texas presidents, claim Paxton’s pro-Trump lawsuit was unethical because it contained frivolous pleadings of fact and law as well as false, dishonest, deceptive or misleading statements.

“The standing to sue Mr. Paxton sought from the Supreme Court had no basis in law and would have been a prescription for an autocratic president to perpetuate his power indefinitely against the will of the voters,” Ratner said in a press release.

Under the Texas Rules of Disciplinary Procedure, the Office of Chief Disciplinary Counsel first determines whether to classify a written grievance as a “complaint” which is investigated, or as an “inquiry” which is dismissed. After determining that a grievance is, in fact, a complaint, an investigation will eventually determine whether there is Just Cause to believe that the lawyer has committed Professional Misconduct or suffers from a Disability.”

Ratner and his co-signatories are asking that Paxton be suspended or banned from practicing law in Texas.

“After its investigation, if the Bar finds that the allegations set forth in our complaint are valid, Mr. Paxton should be suspended from the practice of law or permanently disbarred based on his extreme misconduct,” Ratner said.

Law&Crime reached out to Paxton’s office for comment on this story but no response was forthcoming at the time of publication.