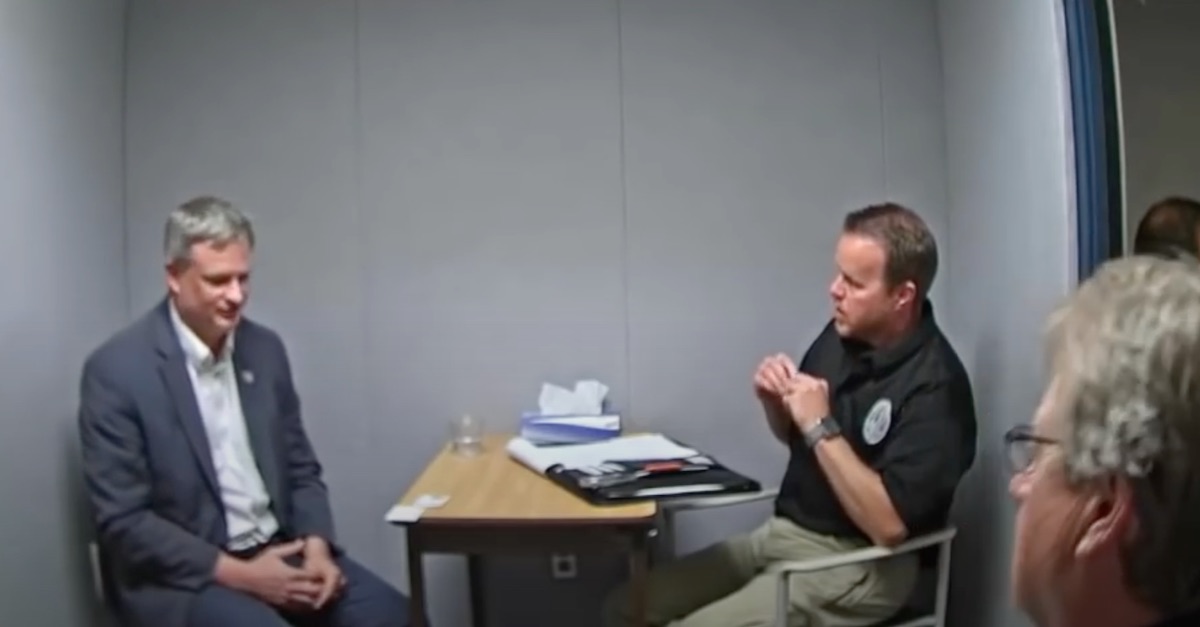 Embattled South Dakota Attorney General Jason Ravnsborg on Friday pleaded not guilty to three misdemeanors related to a deadly car crash in Sept. 2020. Ravnsborg struck and killed Joseph Boever, 55, but claimed he thought he hit a deer. Boever’s body wasn’t discovered until the next day.

Investigators confronted Ravnsborg, a Republican, with evidence he was reading websites containing conspiracy theories about President Joe Biden on his phone right before the impact. When authorities made that information public, the judge in the case, John Brown, ordered that state officials remove it from state-controlled internet sites. The judge’s order ultimately gave South Dakota Republicans an excuse to shut down Ravnsborg’s impeachment proceedings; they dubiously said they were afraid to violate the Attorney General’s due process rights. Ravnsborg was pleased with that move.

Law&Crime obtained audio of the initial appearance — which suddenly became a plea hearing — on Friday.

“Given the protections that are available here and just to aid in hearing, if you wish to remove your masks, you may,” the judge said to the attorneys gathered as the hearing started.

Ravnsborg signed papers to indicate he understood his statutory and constitutional rights. He is charged with (1) operating a motor vehicle while using a mobile electronic device; (2) improper lane driving; and (3) careless driving.

Each charge is a Class 2 Misdemeanor carrying a possible penalty of 30 days in a county jail and a fine of $500.

The hearing, which was supposed to be an initial appearance, went much further.

“At this point, it appears that Mr. Ravnsborg has indicated . . . that he intends to plead not guilty; I guess we can jump ahead to arraignment if that is the party’s wish at this time,” the judge said.

“It is; we might as well do that since we’re all here, your honor,” Rensch said.

But Ravnsborg wasn’t there, the Sioux Falls, S.D. Argus Leader reported. He wasn’t required to attend because the charges were lower-level misdemeanors. His attorney’s presence satisfied the matter.

“At this point, we’d enter a not guilty plea, and we would ask that the court set this matter out for a status hearing in 60 days so that we can go through the discovery. In some cases, there’s a mountain of discovery; in this case, there’s a mountain range of discovery. Literal computer drives and everything. So, it’s important for us to be able to go through all of that, and I would request a status hearing in 60 days, actually.”

“We have no objection to a 60-day time span for review of discovery and to have a status hearing at that point in time,” a prosecutor said.

The judge said he was retired and didn’t have control over the staff and the calendar.

“I think the best way to deal with this is just by email as to dates that will work for you. My dates are pretty open. So, I’ll be working with your schedules, primarily, to see what’s available. If, upon your return home, if you would look at your calendars and see what’s available in the middle part of May, we can schedule that for a status at that time.”

Neither party had any further matters. The judge declared the case was in recess.

Ravnsborg was traveling approximately 70 miles per hour when he collided with Boever, the Argus Leader reported. He reported the incident; the local sheriff personally showed up to investigate. The sheriff issued Ravnsborg a “deer tag” to account for damage to his vehicle and loaned the attorney general a personal car to continue on his way. Ravnsborg said he didn’t see Boever’s body until the next day when he was returning the car to the sheriff. The sheriff apparently didn’t see Boever’s body, either.