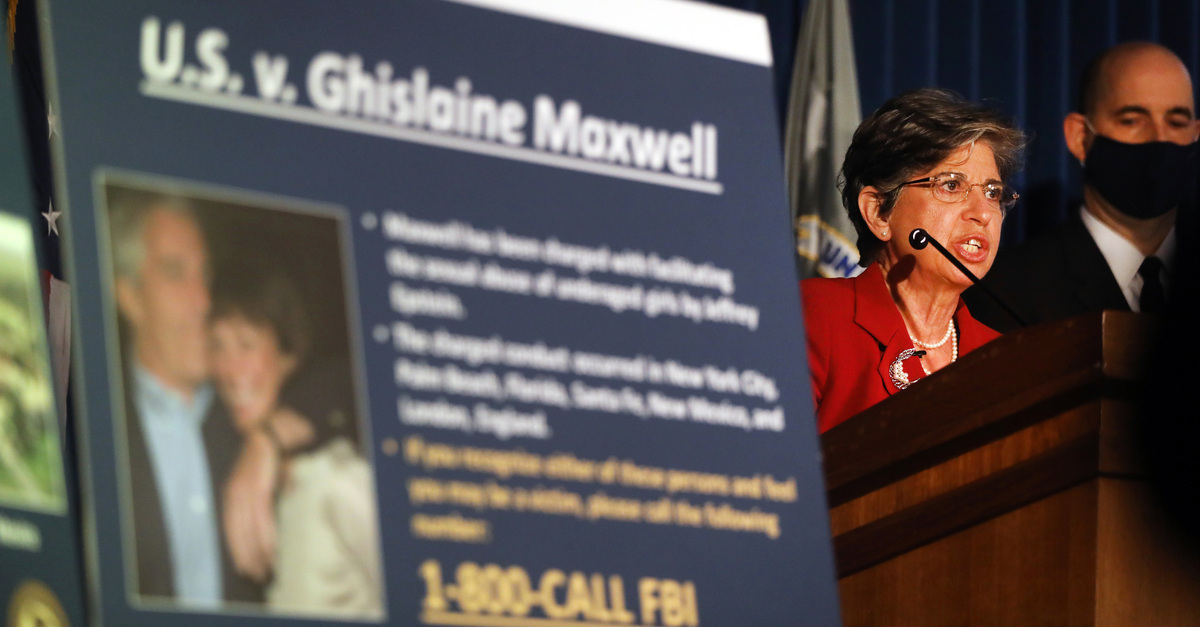 The U.S. Attorney for the Southern District of New York (SDNY) argued against Ghislaine Maxwell’s bail request in an aggressive motion filed with a Manhattan-based federal court on Monday.

The prosecution’s argument against pre-trial release for Jeffrey Epstein’s alleged sex-trafficking accomplice notably focused on one of the most visible, criticized and controversial aspects of case: the non-prosecution agreement (NPA) that infamously purported to shield “any” of Epstein’s “potential co-conspirators” from federal charges.

In 2007, as part of Epstein’s sweetheart deal inked with the Southern District of Florida—an office that was then led by President Donald Trump’s onetime labor secretary Alex Acosta–the mysteriously wealthy financier and alleged serial sexual abuser of young girls was able to secure a criminal justice bargain. In exchange for pleading guilty to state prostitution charges and a 13-month sentence with work-from-home privileges, Acosta immunized Epstein for any further associated crimes–along with his named and unnamed alleged co-conspirators.

Under the aegis of what most see as a self-evidently corrupt non-prosecution agreement, Maxwell sought shelter from the federal charges filed against her in late June—charges that were unsealed after she was arrested in early July.

Arguing the government’s case is “subject to significant challenges,” Maxwell defense attorneys Mark S. Cohen and Jeffrey S. Pagliuca said their client’s “prosecution is barred by Epstein’s September 24, 2007 non-prosecution agreement with the Department of Justice, which covers ‘any potential co-conspirators of Epstein.'”

The SDNY attempted to rubbish that line of argument in full.

“The defendant’s motion alludes to defenses in this case, all of which are legal or procedural in nature, and none of which pass muster, let alone counsel in favor of bail,” Monday’s detention support memo notes. “To begin with, the notion that the defendant is protected from prosecution by the Non-Prosecution Agreement (NPA) between Jeffrey Epstein and the U.S. Attorney’s Office in the Southern District of Florida is absurd. That agreement affords her no protection in this District, for at least three reasons.”

Per the prosecution’s 19-page anti-bail memorandum:

First, the defendant was not a party to that agreement nor named in it as a third-party beneficiary, and the defendant offers no basis to think she would have standing to claim any rights under the NPA. Tellingly, the defendant cites no authority for the proposition that an agreement she was not a party to and that does not even identify her by name could possibly be invoked to bar her prosecution. Second, and equally important, the NPA does not bind the Southern District of New York, which was not a party to the agreement. See United States v. Annabi, 771 F.2d 670, 672 (2d Cir. 1985) (per curiam) (“A plea agreement binds only the office of the United States Attorney for the district in which the plea is entered unless it affirmatively appears that the agreement contemplates a broader restriction.”)); United States v. Prisco, 391 F. App’x 920, 921 (2d Cir. 2010). This rule applies even when the text of the agreement refers to the signing party as the “Government.”

“Third, and perhaps most important, even assuming the NPA could be read to protect this defendant and bind this Office, which are both legally unsound propositions, the Indictment charges conduct not covered by the NPA, which was limited by its terms to conduct spanning from 2001 to 2007, a time period that post-dates the conduct charged in the Indictment, and to violations of statutes not charged in this Indictment,” the prosecution’s memo continues. “In this respect, the Government further notes that the Indictment brought in this District is entirely independent of the prior SDFL investigation, and two of the victims referenced in the Indictment were never approached or interviewed by the SDFL, and had never spoken to law enforcement until they met with our Office in 2019.”

“The SDNY is spot-on here and Maxwell’s argument stands essentially no real chance,” former SDNY assistant U.S. Attorney and current CNN legal analyst Elie Honig told Law&Crime in an email. “At least Epstein had the shred of an argument that he was a party to the NPA and could enforce it against the Government; Maxwell is neither a party to the agreement nor even one of the names beneficiaries. And, as the SDNY notes, the charged conduct falls entirely outside the time frame stated in the NPA.”

Julie Rendelman is a former homicide prosecutor and currently a defense attorney working in New York City. She also serves as a legal analyst on the Law&Crime Network. Rendelman agreed with the SDNY’s reasoning as to why Epstein’s NPA is inapplicable to Maxwell’s bail request, but noted that Maxwell’s defense attorneys are more or less bound to exhaust any plausible excuses to get their client out of jail.

“The attorneys for Maxwell are, for the moment, focused on getting her out on bail pending trial,” Rendelman told Law&Crime. “To that end, they are including every potential argument that either supports the position that she is not a flight risk or undermines the federal government’s case in general.”

“The raising of Jeffrey Epstein’s NPA is just one example of their effort to present potential cracks in the government’s case,” she added. “The problem for Maxwell is that the NPA, even if valid, seems to only bind the Southern District of Florida, not New York. Further, as Maxwell was not a party to the NPA nor named in it, it would seem a stretch to think this would save her from facing charges in New York.”