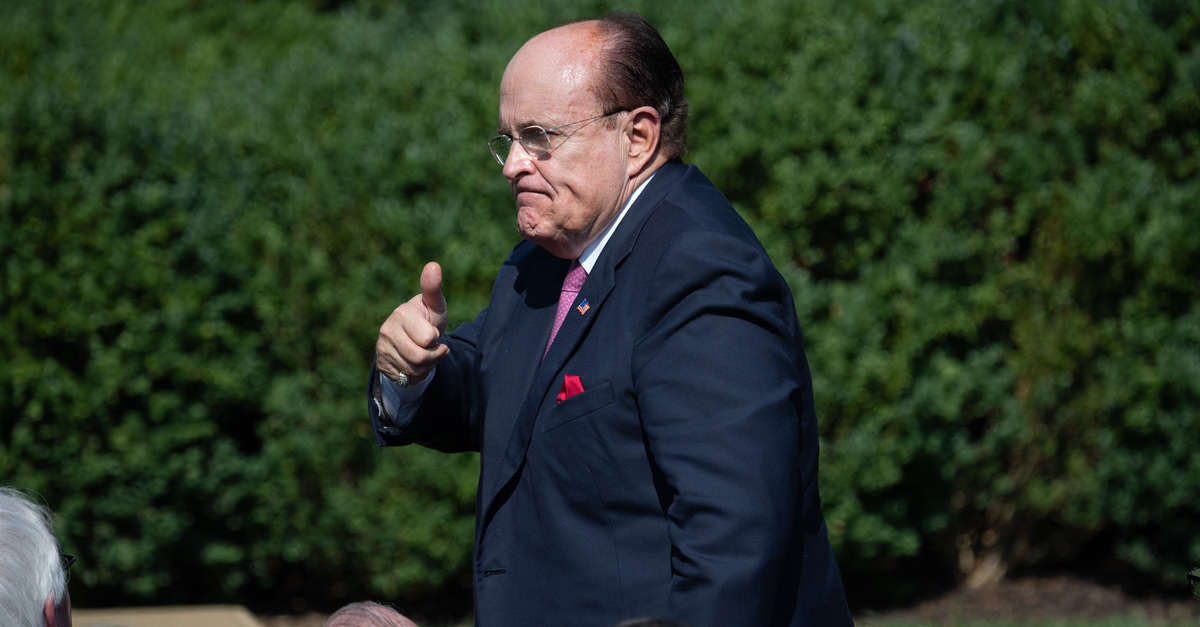 According to ABC News:

The investigation is being conducted by the FBI’s New York field office and prosecutors in the Southern District of New York, the same U.S. Attorney’s office Giuliani ran before he became mayor of New York.

The investigation has since been confirmed by multiple media outlets.

The contours of that investigation are said to include Giuliani’s business and professional relationships with two Soviet-born businessmen who were recently indicted on campaign finance and conspiracy charges in the Southern District of New York (SDNY).

Those two men, Lev Parnas and Igor Fruman, were emerging power players in the Trump-dominated Republican Party before their federally-hastened downfall earlier this week. Over the past few years, Parnas and Fruman showered several dozen GOP officials and conservative organizations with hundreds of thousands–if not millions–of dollars in controversially-sourced campaign cash.

Much of that money is now believed to have been Russian in origin–allegedly laundered by Parnas and Fruman over several years for the GOP’s benefit in marquee races like Florida Republican Governor Ron DeSantis‘s razor-thin victory over Democrat Andrew Gillum in 2018.

And Parnas and Fruman quickly exacted a return on their investment.

The Floridians met and dined with President Trump himself, Donald Trump Jr., various congressional Republicans and the co-chair of the Republican National Committee. They eventually found their way into Giuliani’s inner circle and began promoting their own business interests in the Ukraine under the imprimatur of official U.S. policy.

Eventually, Parnas and Fruman–with Giuliani’s help–successfully lobbied for the removal of former U.S. Ambassador to the Ukraine Marie Yovanovitch—who opposed their business schemes.

One such scheme, though unsuccessful, was described as a “shakedown” by a friend of the person targeted.

Two months after that failed effort, Yovanovitch was recalled by Trump. Giuliani has repeatedly said he played a key role in the career diplomat’s ouster–telling the Wall Street Journal he convinced the 45th president Yovanovitch harbored “anti-Trump bias.”

“The ambassador to Ukraine was replaced,” the former New York City mayor told the Associated Press. “I did play a role in that.” Yovanovitch was mentioned on the July 25 phone call between Trump and Ukrainian President Volodymyr Zelensky. Trump said she was “bad news.”

Yovanovitch on Friday told an impeachment committee in the House that Giuliani’s representations of her to Trump were “fictitious.”

“I do not know Mr. Giuliani’s motives for attacking me,” she said–but surmised that Giuliani’s business associates “may well have believed that their personal financial ambitions were stymied by our anti-corruption policy in Ukraine.”

Parnas and Fruman are, aside from criminal defendants, key witnesses in the U.S. House of Representatives impeachment inquiry. The two men are thought to have played instrumental roles in the Trump 2020 campaign’s ongoing efforts to discredit Democratic rival Joe Biden by way of digging up dirt on the business interests and allegedly corrupt activities of his son, Hunter Biden.

Little is known of the criminal probe into Giuliani’s own culpability or if the impeachment inquiry is likely to dovetail with the SDNY’s investigation into Giuliani’s relationships with Parnas and Fruman.

As Law&Crime previously reported, several former federal prosecutors immediately pounced on the news of Parnas’ and Fruman’s arrest–noting that his clients being scooped up by law enforcement did not bode well for Giuliani’s own legal fate.

Harry Litman, a former U.S. Attorney and former Deputy Assistant Attorney General who is a columnist for the Washington Post, said the whole scenario did not bode well for Giuliani.

“What a tangled web Rudy [Giuliani] weaves,” Litman tweeted minutes after the news broke. “To a prosecutor’s eye, this really looks increasingly like one big scheme, overseen by Trump and Giuliani, to obtain illegal assistance from Ukraine in the 2020 election.”

“It’s a total spider’s web,” Litman continued, “Congressman #1 [is] Pete Sessions. Giuliani headlined a fundraiser for him last year (he lost). What are the odds that the SDNY basically knows everywhere Rudy has been in the last month or so…”

The circumstances of how Parnas and Fruman were apprehended have also lent some credibility to suspicions that Giuliani was next on the SDNY’s food chain. The pair attempted to flee the country on a one-way flight to Vienna, Austria. Giuliani was also planning a trip to Vienna within hours of Parnas’ and Fruman’s failed flight attempt.

This is the president’s second personal attorney to be investigated in a criminal matter since Trump assumed office. The first was Michael Cohen. Cohen is currently serving out a three-year prison sentence in Otisville, New York after pleading guilty in the SDNY to campaign finance violations, tax evasion and bank fraud. The campaign finance violations were related to hush payments made to  Stormy Daniels and Karen McDougal. Those payments are still causing the president some agita in Manhattan.

Jerry Lambe and Matt Naham contributed to this report.