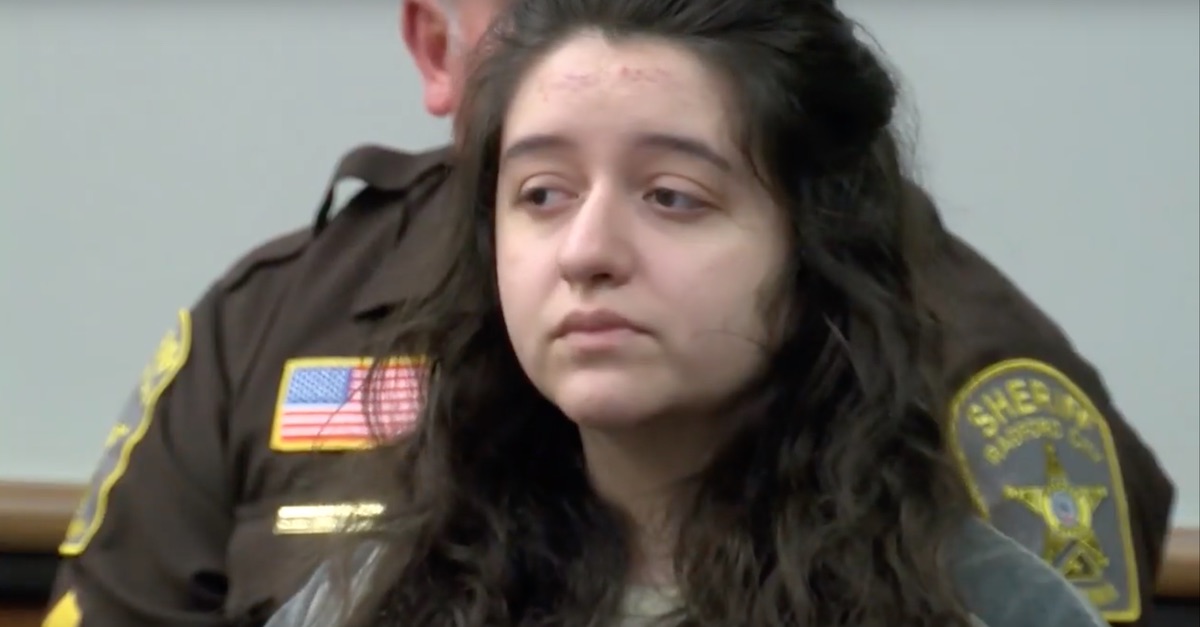 The college roommate from hell who thought she did “cocaine with the devil” and stabbed her “best friend” to death pleaded guilty to second-degree murder on Monday, meaning she will spend the next 20 years of her life behind bars.

Luisa Ines Cutting, 21, was arrested in January 2019 for the brutal stabbing murder of 20-year-old Alexa Cannon, a psychology major at Radford University in Virginia.

My heart hurts for Roanoke today.

Alexa overlapped two years with both my brother and me at PH. Very emotional, to say the least, to dig up these old yearbook photos (2013-2016, respectively).

Sending love to the entire Cannon family as it mourns — pic.twitter.com/un0DEtqGur

At the time, Law&Crime reported that authorities received multiple phone calls from neighbors at an apartment complex. They reported hearing screaming, and described it as a possible domestic incident. Upon arrival, officers found a woman dead from multiple stab wounds. That woman was Cannon. A search warrant said that Cutting, who was covered in blood, met officers at the door, and told them to arrest her because she “killed [Cannon].” Officers found Cannon on the floor with a butcher knife sticking out of her mouth.

The killing shocked and appalled. Past social media posts indicated that Cannon and Cutting were very close friends. A July 9, 2018 post from a Facebook account in Cannon’s name said as follows:

So incredibly proud of my best friend, Luisa Cutting for becoming Latinos Student Alliance’s President! I know you’re going to be amazing with everything you do! Love you more!!

A March 28, 2018 post from an Instagram account in Cannon’s name said “I met this girl two years ago online and somehow we ended up living across from each other for a year, this summer she was equivalent to my mom in Cancun. And unimaginably she still puts up with me and now we’re living together next year.”

“Love you more Lu and everyone pray that we don’t kill each other this year,” she added, chillingly.

We’ve since learned more about what led Cutting to stab her friend to death. Radford City Commonwealth’s Attorney Chris Rehak and defense attorney Blair Howard both cited Cutting’s extreme drug use as the primary factor.

On the night before the murder — after having not slept for several days — Cutting abused cocaine, Adderall, marijuana, alcohol, mushrooms, tobacco, and Xanax, WDBJ reported. Rehak said that Cutting was doing some seriously bizarre stuff, like attempting to shove her hands into her mouth. There was also the detail that Cutting said she did “cocaine with the devil.” Cutting’s behavior was so alarming that she had to be involuntarily admitted to a hospital for 11 days. Per The Roanoke Times:

The interrogation was a “rambling and bizarre series of episodes” that included Cutting’s statement that she had done drugs with the devil, Rehak said.

At various points Cutting prayed, talked about the Apocalypse and recited the Hail Mary prayer over and over in Spanish, Rehak said.

Howard would say there was little doubt Cutting underwent a “psychotic episode” that was fueled by drugs.

“I am absolutely convinced she was undergoing a psychotic episode, but that was brought about, unfortunately, by her use of drugs,” Howard said.

Cutting on Monday said that there were “no words for this tragedy,” adding that her heart was “filled with sorrow and grief.” “My heart goes out to the Cannon family,” she claimed. “I am so, so sorry.”

The silver lining cited by the Rehak was that the guilty plea spared Cannon’s family and friends from having the endure a trial.

“Perhaps more importantly, the agreement secured a murder conviction, avoided any appeals and spared Alexa’s family and friends the anguish and anxiety of trial,” he said in a statement.