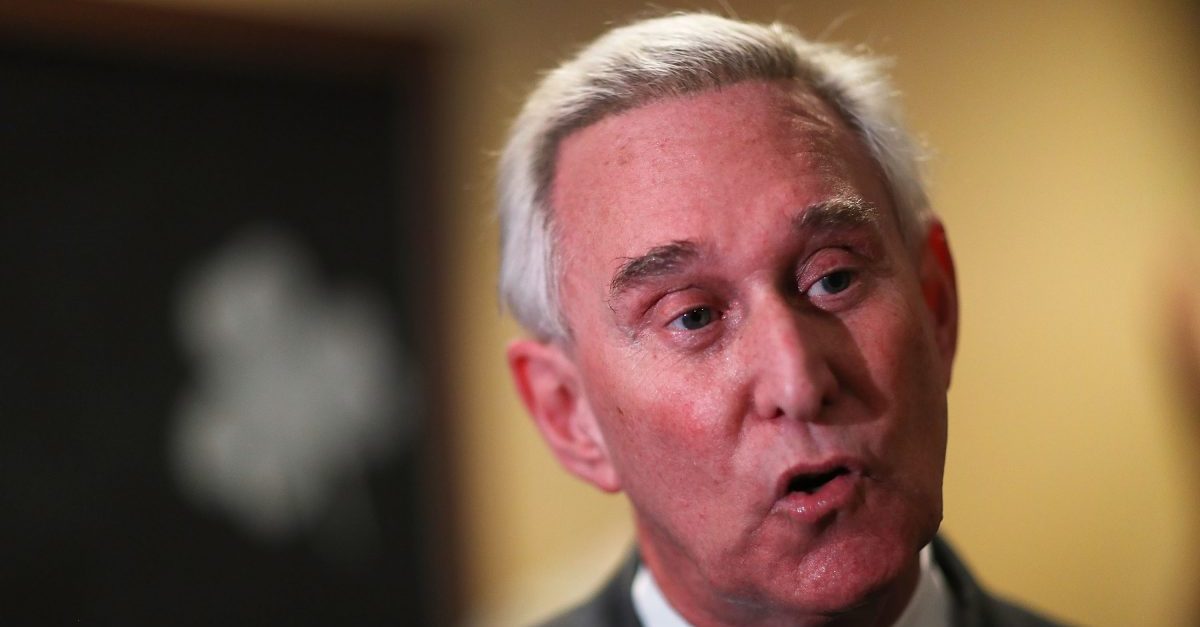 Republican political maven and former Trump campaign adviser Roger Stone would be the first to tell you that he believes Special Counsel Robert Mueller is going to “frame” him for a crime. In fact, he’s already told you that. It’s one thing to flippantly–and at times glibly–say “it’s a setup”; it’s another thing, however, to quietly beef up your legal team during the calm before the storm.

The latest reporting from ABC News suggests that Stone is taking things pretty seriously these days, as Mueller focuses in on what Stone and Stone associates knew ahead of the 2016 hack of the DNC and the ensuing email dump on WikiLeaks. Much virtual ink has been spilled on Stone recordings that Mueller reportedly has in his possession. Stone’s longtime associate/convicted felon/former Trump campaign chairman Paul Manafort’s name has also come up along the way, adding to the intrigue.

Stone has reportedly hired “prestigious Florida attorney” Bruce Rogow to be his lead attorney “on all matters related to the office of the special counsel and all constitutional matters, such as first amendment issues that may arise.”

Interestingly, Rogow has experience arguing cases before the U.S. Supreme Court and has represented President Donald Trump in civil cases in the past two decades.

Grant Smith, another Stone attorney who has issued denials of wrongdoing on his client’s behalf to the media, welcomed Rogow’s “stature and gravitas” to the team. Stone appears prepared to cite his passing of two polygraph tests as proof that he has done nothing wrong, even though these are largely considered inadmissible evidence in a court of law.

As part of these tests, Stone was apparently asked if he “communicated with [WikiLeaks founder] Julian Assange during the 2016 presidential election” and discussed the hacked docs with Trump.

Stone, of course, responded “no.”

This comes on the heels of reporting that Mueller’s examination of Stone seeks to uncover “whether Stone had backchannels to WikiLeaks during the 2016 election” that go beyond the Randy Credico connection.

In recordings, Stone said he “talked to Trump regularly” early on in the campaign. In another piece of evidence, Stone allegedly expressed that he should “receive credit for coordinating” with WikiLeaks. Per CNN:

Additionally, investigators are looking into whether Stone shared information that he believed was from WikiLeaks with members of Trump’s presidential campaign, according to a source familiar with the probe. Investigators have been provided recordings of Stone claiming he talked to Trump regularly early in the 2016 presidential campaign, CNN has learned. Later, after various document dumps from WikiLeaks, Stone claimed in separate communications he should receive credit for coordinating with the group, the source said.

“Mr. Stone is confident that the transcripts of whatever recordings may be out there are 100% consistent with his sworn testimony and both his public statements at the time, and subsequent clarifications of the same,” he said.